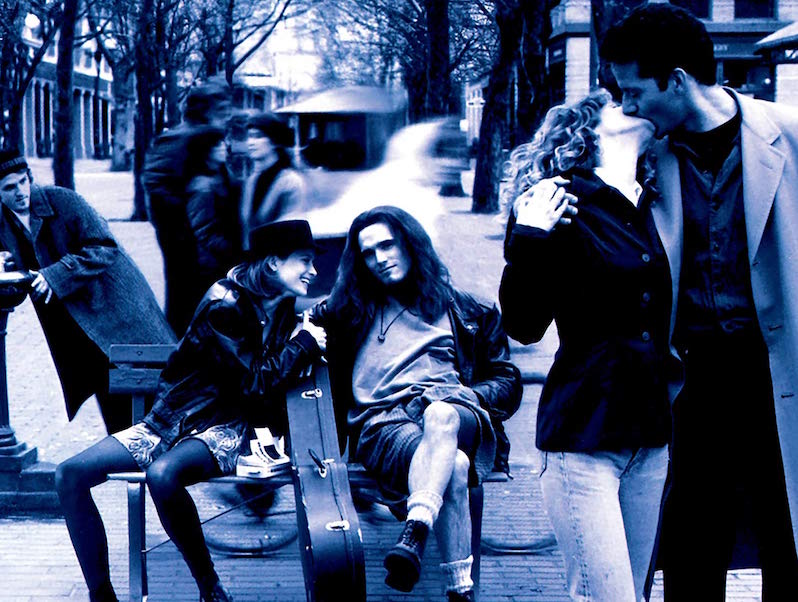 The ’90s was, in hindsight, a kind of renaissance for big-budget movie soundtracks. The popularity of the CD format meant you could fit more music onto an album, which in turn meant sometimes making an accompanying album that was nearly as long as the film itself. Add to that the increasingly expanding blockbuster numbers, and every studio needed its chart-topping soundtrack to match the film itself. It didn’t always work out that way. And sometimes the results were just bad (Godzilla, for instance). But for these albums, 10 of the best ’90s movie soundtracks to grace our ears, it meant a moment of mixtape genius, funded by Hollywood bigwigs. 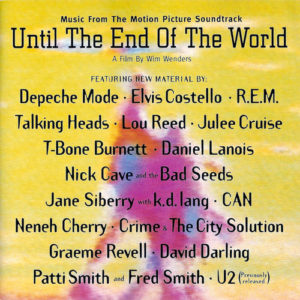 Until the End of the World

With street cred built up by Paris, Texas and Wings of Desire, director Wim Wenders approached as many sophisticated musicians as he could think of to record songs for a new film about a tech-enabled near-future. The results tower over what would become a love-it-or-hate-it entry in Wenders’ filmography. The album includes the last will and testament of both Talking Heads (“Sax and Violins”) and Can (“Last Night’s Sleep”), as well as Elvis Costello’s torchy Kinks cover and Julee Cruise’s tango take on Elvis Presley. R.E.M. and Kate Pierson make up for every mistake they made on Out of Time, and U2 contribute an early mix of the title track before it appeared on Achtung Baby. Depeche Mode made a hymn, T-Bone Burnett made sci-fi, and Jane Siberry and k.d. lang made “Calling All Angels” for all subsequent angry cries until the end of time. Along with interludes from Graeme Revell’s score, this compilation strikes note-perfect atmosphere even when separated from Wenders’ first true worldwide flop. It’s not just an underappreciated soundtrack but one of the best LPs of the 1990s, period. – Adam Blyweiss 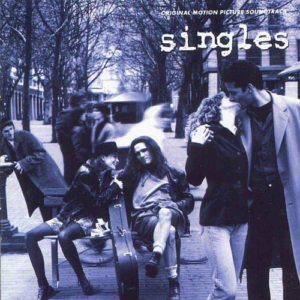 Matt Dillon as a grunge-boy douche bag; a cameo from Pearl Jam; twenty-somethings falling in love in the Pacific Northwest—what more could you possibly want? How about one of the best film soundtracks to ever capture a cultural phenomenon in real time? Singles does this and more—catching the “grunge” movement at its peak, this 1992 film is as kitschy as it is authentic. Not only does the majority of the soundtrack consist of songs by those who led the grunge movement—Alice in Chains (“Would”), Pearl Jam (“Breath,” “State of Love and Trust”), Screaming Trees (“Nearly Lost You”), Mudhoney (“Overblown”), Soundgarden (Badmotorfinger outtake “Birth Ritual”), among others—the additional original compositions were scored by Paul Westerberg (“Dyslexic Heart,” “Waiting for Somebody”), whose band The Replacements, while not necessarily influential in style to the grunge movement, certainly contributed an aesthetic influence. Singles is a comforting slice of music-nerd ephemera, as any grunge fan will recognize Eddie Vedder and company as Matt Dillon’s band Citizen Dick (perhaps one of the most on-point fictional band names in history), as well as the excitement that surrounds such a landmark musical/cultural movement. – Timothy Michalik

The soundtrack to a middling action flick about suburban rubes who take an ill-fated shortcut through Chicago is sneakily ambitious, pairing mostly edgy alternative bands with hip-hop artists in varied stages of their careers in 1993. On its surface Judgment Night looks a lot like an effort to boost the profiles of the bands— surely someone was hoping this would be the big break Teenage Fanclub or Helmet needed—but surprisingly the gimmick works more than it doesn’t. Some pairings are well-nestled fits (Teenage Fanclub and De La Soul’s “Fallin’,” Biohazard and Onyx’s title theme); others take unexpected advantage of stylistic tension (Sonic Youth and Cypress Hill’s “I Love You Mary Jane,” Mudhoney and Sir Mix-A-Lot’s “Freak Momma”). Other matchups are executed so surely (Slayer and Ice-T’s “Disorder”) that they couldn’t fail even if they were exec-produced by Michael Bay. – Paul Pearson 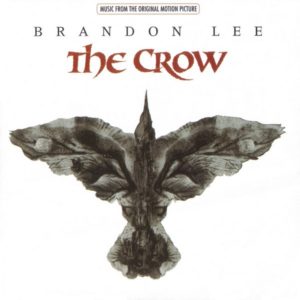 Soundtrack events like that of The Crow are fairly rare anymore, the kind of big-budget mixtape that brings together a who’s-who of dark music both past (The Cure, Jesus and Mary Chain) and present (Nine Inch Nails, Rage Against the Machine) that music supervisors of The Lost Boys soundtrack could only have dreamed of (but arguably did create a template for). As a time capsule of the ’90s, it suggests a post-grunge future where leather won out over cargo pants (which it arguably did, briefly, before the Family Values tour) and where loud, angsty music showed its sexier side. That side did not necessarily arise with Pantera’s Poison Idea cover, or Rollins Band’s Suicide cover. It did show itself in Nine Inch Nails’ Joy Division cover, however. And no, not all of the album consists of covers, though there are a few more (Rage Against the Machine taking on Zach De La Rocha’s old band Inside Out, for instance). The Cure’s “Burn” is the band’s best ’90s track that wasn’t on Wish (though would have fit in comfortably there), Helmet’s “Milktoast” features a streak of weird effects here that were removed on Betty‘s version, and Jesus and Mary Chain’s “Snakedriver” is as cool as you remember it. An outsize level of attention was paid to the film due in large part to the on-set death of star Brandon Lee, though over time, this is the aspect of the film with the longest lasting legacy. – Jeff Terich 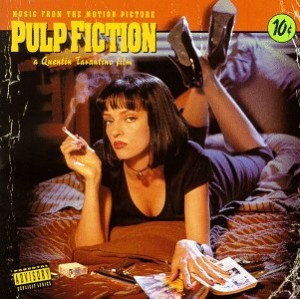 Film director Quentin Tarantino was quick to establish a reputation as a trend-setter—or maybe a trend-reviver—with connect-the-dots storytelling borne from Kurosawa, spaghetti westerns, and blaxploitation. Tarantino also bucked the trend heard in many other 1990s soundtracks, filled as they were with contemporary songs that mirrored moments in a story or, at worst, were merely used as promotional tools. His second film about the violently imperfect people who live among us would be madly anachronistic were it not for brief inclusions of cell phones and boutique coffee, and the old music selected for his soundtrack helps prolong the illusion that this movie was set closer to 1974 than to 1994. Dick Dale playing Tarantino’s rock vision of Ennio Morricone, spare soul from Dusty Springfield and Maria McKee, funk and country and Neil Diamond covers—these all coat the dialogue bits and the onscreen action in layers of tongue-in-cheek, gun-to-head grit. – Adam Blyweiss 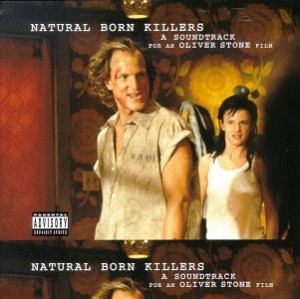 It takes a lot of brains to craft film that integrates sound—incidental sound and dialogue as well as music—into the visuals to help advance a story. You can pinpoint classics that do this, both critical and cult, from at least A Clockwork Orange to Requiem for a Dream. So when mad genius Oliver Stone started transforming a murder-filled screenplay from mad genius Quentin Tarantino into a treatise on fame and freedom, he turned to a mad genius of sound for some secret ingredients. Nine Inch Nails’ Trent Reznor and Stone reproduced a bunch of on-set audio that segued directly into music (L7’s “Shitlist,” Mussorgsky’s “Night on Bald Mountain”). They edited and remixed Reznor’s own work. They even added sound effects over mashed-up songs, like the “Sex is Violent” segment featuring Diamanda Galás and Jane’s Addiction. Sure, Natural Born Killers includes discrete, skillfully picked cuts from Dr. Dre, Lard, Bob Dylan, and more. But this album is less of a soundtrack and more of a sound collage, portraying the chaos of the movie across the screens of listeners’ ears. Twenty-five years on, I still don’t think there’s an album quite like it in the genre. – Adam Blyweiss 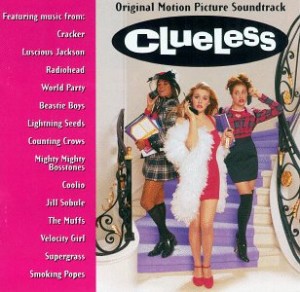 Much like the film itself, the soundtrack to Clueless is inextricably, almost painfully tied to the ’90s. There’s a token ska song (Mighty Mighty Bosstones), a number of well-chosen but still predictable covers (The Muffs take on Kim Wilde, World Party does Mott the Hoople, Cracker tackles The Flamin’ Groovies), and, uh, Counting Crows. And much like the film itself, the tracklist is slyly clever and a lot of fun almost 25 years later. The “Kids In America” take is a little on the nose, perhaps, in the context of Cher and her spoiled friends in this then-contemporary satire, but you also don’t want to turn it off anytime soon. Luscious Jackson disco-ify one of their funkiest numbers, and underdog shoegazers Velocity Girl even manage to sneak in. Radiohead makes an appearance as well (twice in the movie!) with two highlights from The Bends to represent Josh’s pretentious egghead tastes. It’s a well-sequenced and selected grouping of songs worth revisiting. Hopefully not sporadically. – Jeff Terich 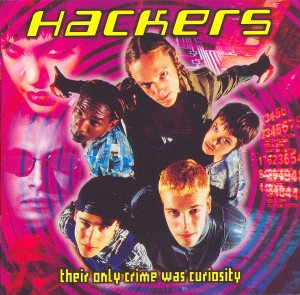 I get that the soundtrack for The Matrix included electronic music used to particularly important effect throughout that movie, but it also mixed its messages with crunchy guitar rock (“Wake Up,” everyone!) and diluted them with music that barely shows up onscreen. If there is movie music that reps hardest for the decade’s infatuation with zeroes and ones, let it be the original soundtrack to Hackers. (Two other volumes would follow, each with less connection to the film.) On many levels it’s far inferior to The Matrix as a movie that explores bleeding-edge tech used to rebel against nefarious plans and planners. But instead of working in Keanu Reeves’ poisoned and deepfaked future with music only we can hear, Angelina Jolie and the rest of our young white hats dive into the dumpsters and networks of the modern day propelled by big beat (Underworld, The Prodigy), acidic trance (Orbital, Carl Cox), and dance-rock (Stereo MCs, Urban Dance Squad). And, uh, Squeeze for some reason. – Adam Blyweiss 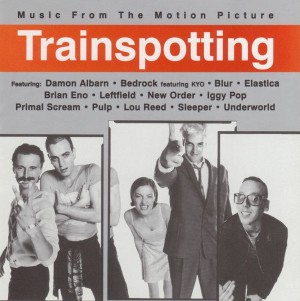 The soundtrack to Danny Boyle’s frenzied adaptation of Irvine Welsh’s novel about Edinburgh heroin addicts is a bridge between tenuous subcultures more than 20 years apart, and emulates the movie’s hobbling balance between giddy mania and grim collapse. Iggy Pop’s gleefully insubordinate “Lust for Life”—the opening song that fits the acerbic subtext of Trainspotting so well it’s practically source material —represents the archival material along with Brian Eno (“Deep Blue Day”) and Lou Reed (“Perfect Day”), which played behind the “toilet” and “overdose” scenes respectively. Newer material from Blur (“Sing”) and Pulp (“Mile End”) sounds like natural extensions of thought, and the decision to let Primal Scream’s title tune and Underworld’s amazing “Born Slippy” fully play out over their 9-plus-minute running times turn the album into its own cinematic experience. Trainspotting joins the exclusive rank of ‘90s soundtracks that tell complete stories on their own. – Paul Pearson 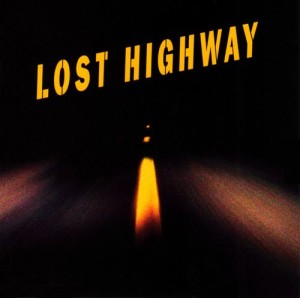 In hindsight, Lost Highway‘s hit soundtrack seems a little surreal. For director David Lynch, that’s often the point, as was the case with this notoriously difficult entry in the filmmaker’s oeuvre. But the soundtrack itself was a fine work on its own, a particularly strange juxtaposition of hit alternative acts (Nine Inch Nails, Smashing Pumpkins) against the music of longtime Lynch collaborator Angelo Badalamenti, some Trent Reznor mood music, and a pair of David Bowie bookends. It all works, of course, though this is a musical universe that’s some distance away from the ’50s fetishism of the Twin Peaks or Blue Velvet soundtracks. Though the results aren’t quite what anyone would have expected—”The Perfect Drug” is Nine Inch Nails at their most pop, “Eye” is a top five Smashing Pumpkins song despite having almost no guitars, and Rammstein, we’ll we didn’t see that coming, though they’re now international superstars. Though critically the film’s reception was mixed, Lynch’s industrial-rock gambit is one that still warrants fresh spins. – Jeff Terich