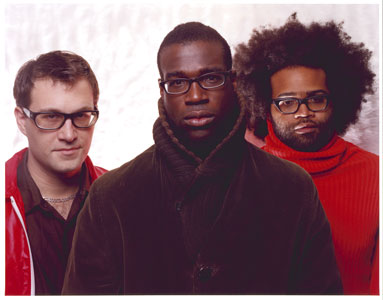 Listeners were treated to a surprise a cappella version of The Pixies’ “Mr. Grieves” on TV on the Radio’s debut EP, Young Liars, an unexpected treat that not only served as a brilliant re-working of the original, but as an aspect of TVOTR’s musical persona that was only hinted at on the four preceding tracks. A few months later, however, and Tunde Adebimpe and Kyp Malone’s vocal harmonization would ultimately come to form the best song on the group’s full-length debut.

“Ambulance,” musically, is a gorgeous and haunting tune, built solely around voices and free from the fuzzy, enormous production characteristic of most of the band’s other songs. It’s a slow build, kicking off with Adebimpe’s bassline of “dum-dum-dums” and gradually adding layers upon layers of beautiful harmonization. These bare, reverb-laden voices could be singing about anything, really, and it would still be a beautiful song. And yet the lyrics duel with the arrangement for the song’s most intriguing aspect, as Adebimpe likens love and companionship to a grisly auto wreck (“I will be your screech and crash/ if you will be my crutch and cast“). It’s a touching if completely bizarre sentiment. And there’s no other song like it.

Tags
TV on the Radio