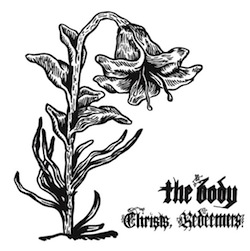 The purpose of doom metal, generally, is to create an atmosphere of darkness and despair, but it takes a visionary doom artist to actually make sounds that feel like the earth is about to go up in flames any minute. Yet that’s almost exclusively what Portland avant garde metal duo The Body does, most poignantly on their 2011 album All The Waters of The Earth Turn to Blood, which paired thick, crushing sludge riffs and eerie female choirs, the fluid synergy of which is utterly terrifying. They tend not to bring those female choirs on tour with them — the DIY two-man touring approach doesn’t budget for so many extra passengers — but their live show is just as intense, if not more so. When the duo performed at San Diego’s Che Café earlier this year, the wood-and-glass structure constantly seemed on the verge of collapse as a result of the tremors caused by Chip King’s multi-stack guitar assault. It’s the kind of low-end roar that makes your skin crawl and your molars rattle — awesome, if generally unpleasant physically.

On Christs, Redeemers, the duo’s first for Thrill Jockey, King and drummer Lee Buford continue to herald their end-times visions through alternately gorgeous and viciously dense dirges, juxtaposing beauty against brutality, despair and hopelessness against grace. King and Buford are perfectly open about their pessimism about humanity and general outlook on the world, and though that kind of image sells in heavy and noise music circles, for The Body, it’s a driving force behind the brilliantly harrowing path of wreckage they navigate.

The initial sounds on the album are those of apparitional female voices, backed by a static-ridden din that grows more deafening on “I, The Mourner of Perished Days.” It’s a troubling prologue, a reserved, yet increasingly more uncomfortable suggestion of dark and violent things to come, even when the violence itself is merely hinted at. But it’s clear that dark and disturbing things are to come — quite stunningly dark and disturbing things on “To Attempt Openness,” a seven-minute masterpiece of anguished melody and artful intensity. King’s guitars are characteristically massive, but accessible, providing a sludgy counterpoint to the mesmerizing harmonies of the Assembly of Light Choir. And on the tortured crawl of “An Altar or a Grave” — made all the more disturbing through its grainy, snuff-film-style video — Godspeed You! Black Emperor-like strings offer mournful beauty amid King’s abrasive shrieks.

There are moments in which The Body opts to put their full focus on sheer menace (“Failure To Desire to Communicate”) or gorgeous, graceful ambience (“Night of Blood in a World Without End”). But their strongest tracks are those that bridge the two extremes, like the atmospherically heavy “Denial of the Species,” which is propelled by echoing drum beats and a whirring drone that’s almost more intense because it isn’t crushing. Then again, the blast-beat attack of closing track “Bearer of Bad Tidings” throws a lot at the listener at once, a final hailstorm of destruction before that final veil of darkness comes. The Body evoke an apocalyptic landscape that’s neither cartoonish nor graphic, but almost realistic in how beautifully horrible it is. Christs, Redeemers is the graceful curve in the slowly drifting plume of smoke, and the ray of sunlight on charred rubble.