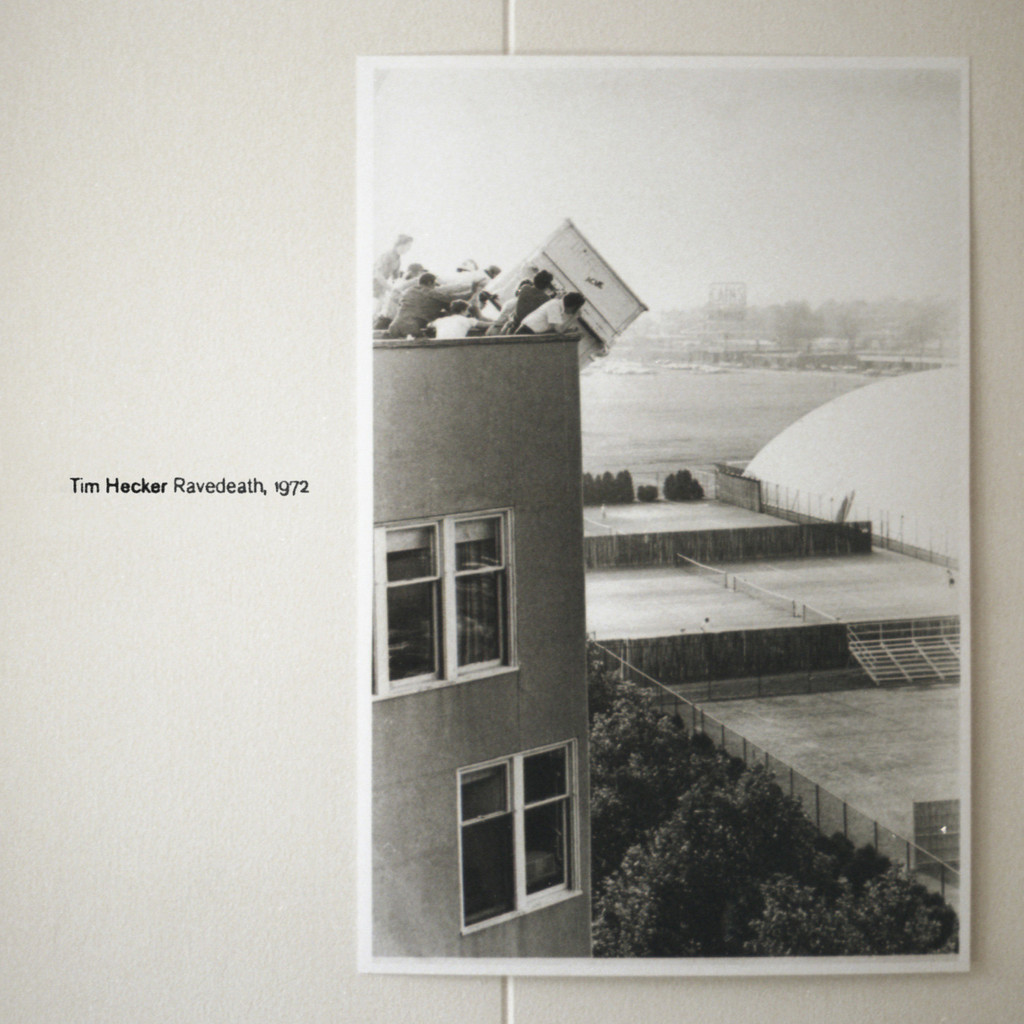 Specializing in the deconstruction of constructed sound—or maybe it’s the other way around?—Canadian musician/producer Tim Hecker‘s brand of ambient is anything but soothing unless you have, say, a Dexter fetish. Hecker soundtracks scenes in the mind’s eye which embrace joy and comfort through drama and controlled malevolence. His latest effort is Ravedeath, 1972, and even without a clear theme that’s a meaningful title hidden in plain sight.

It’s a release obviously electronic in nature but the word “ravedeath” implies this ain’t no party, this ain’t no disco, and that impression is borne out with only the opening frame of “In the Air” having even the hint of a rhythm. As for the year, history frames 1972 with tense battles and standoffs (Vietnam, Fischer-Spassky, the Munich Olympics) and the vastness of space (as it was full of missions and launches). Appropriately enough, Hecker sets in opposition organic instruments and synthesized distortion, his Reykjavik field recordings and later studio manipulations, with wide-open yet claustrophobic results.

Ravedeath, 1972 is the aural equivalent of approaching a curiously inviting foggy landscape, only to discover the fog is a choking military-grade gas. After the book-foreword that is “The Piano Drop,” the three-chapter “In the Fog” weaves together cathedral organs, natural and glitchy, with hints of scraping metal and whirring machines. “Studio Suicide, 1980,” meanwhile, calls to mind an orchestra stuck in perpetual warmup-is it a CD stuck and skipping, or some more primitive decay?

These are dark patterns of thought, to be sure, but that doesn’t mean they’re uninteresting, nor devoid of melody or fragile beauty. The back half of “Hatred of Music” goes so far as to insinuate qawwali deep within the noise, while “No Drums” might be the prettiest thing on here, Hecker filling it with what sound like soft-to-the-touch keyboard waves.

Hecker’s context is a fluid one. He might be addressing the waste we leave behind in this digital age, which leads into how we might recycle it, which raises the question of reconciling its existence in what’s left of the natural world. To these multiple ends Ravedeath, 1972 closes with the three-part suite “In the Air,” its soft piano-jazz core blistered, burned and, mimicking the cover art, ultimately pushed out at the end, the closing echoes forming the death throes of an album that wants to turn in on itself.