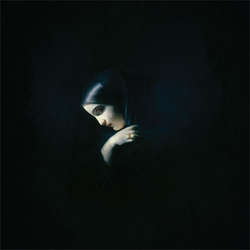 True Widow wield space more heavily than anyone. The Dallas trio, a self-coined “stonegaze” band, take influence from a fascinating mixture of sounds — slowcore, shoegaze, doom metal, post-punk — without ever readily committing to any one of them. On paper this would seem to have potential to become some massive and complex genre hydra, its stylistic heads regenerating with dagger teeth and breath of fire. But on their records, True Widow doesn’t so much go for the obvious onslaught of density as a more restrained, eerie form of rock music that has the fuzzed-out texture of stoner rock with almost none of the crushing intensity. In fact, it’s the space left in its absence that makes the heaviest impact.

Circumambulation, the band’s third album and first for Relapse, is almost certainly the least metal release on the metal-centric label this year. There’s a kernel of heavy metal in the music the band plays, a dark and doom-laden sound that’s more about atmosphere than outright aggression, but True Widow is far from metal in the conventional sense of the world. The opening riff of “Creeper,” the first track on Circumambulation, doesn’t echo the likes of Sabbath, Priest, Maiden, Slayer or Mastodon, but rather The Fall, in particular “Mansion,” the ominous introduction to 1985’s This Nation’s Saving Grace.  D.H. Phillips’ guitar doesn’t pierce or shred, rumble or detonate, it rings with an eerie restraint, filling in the chilling rests and spaces with ominous hum. And there’s something unbelievably heavy about those crevices and in-betweens, suggesting greater horrors lie in what’s obscured by shadows rather than in what’s illuminated.

That True Widow use their spacious, economical approach to hint at overwhelming darkness rather than bludgeoning the listener with it ultimately makes Circumambulation a much more effective and powerful set of music. The outstanding “S:H:S” is slightly denser, and just a tad more uptempo than “Creeper,” but that sliver of difference might as well be a continent, the group’s hypnotic riffs carrying through an incredible, yet highly restrained piece of doom psych. The band takes a gorgeously bluesy turn on “Four Teeth,” in which bassist Nicole Estill’s vocals lend a more ethereal quality to their smoky chug. The abrasive riffs of “Numb Hand,” however, veer farther away from both shoegaze and metal, instead striking a rusty chord that carries the resonance of ‘90s indie rockers like Silkworm and Come, and quite impressively at that. True Widow’s hooks might be their most subliminal quality, but certainly one of their best.

On a track like “Trollstigen,” True Widow can even give off a chilling, gothic vibe, one that populates almost all of their songs, but can be ratcheted up with just a slight change in chord progression or key. This is a prime example of how True Widow’s “less is more” approach is actually one more freeing for the band than limiting. When the template is fairly open from the get-go, then the differences, even if slight, come off much more dramatically in practice. The greater the space, the starker the variation in what fills it.

Shadow of the Horns: Judgment Night 2016