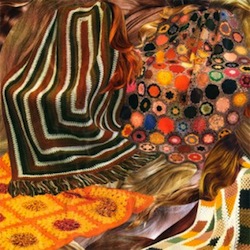 Dependable and unpredictable aren’t two adjectives that are often used to describe the same person, but in the case of Ty Segall they’re two equally apt descriptors. Spending much of last year fronting various projects that veered from Stooges-style noise rock, to psych-rock to garage rock ballads, it’s often hard to pin down any logical trajectory in his discography. Even still, many will be rightfully confused by his latest entry, the almost entirely acoustic Sleeper.

If we’re being honest here, it can be pretty difficult to distinguish Segall’s many projects and it’s not necessarily because they don’t each have their own flavor. It’s more that every full-length with Ty’s name attached to it in some respects, no matter what moniker it’s under, has its own flavor. But no matter which direction he takes, everything he commits to has his distinctive character all over it. For that reason it’s hard to mistake his latest album as the work of anyone else, even if there isn’t really a precedent for it in his quickly growing catalog.

It’s not that Ty hasn’t shown us his mellow side before — much of the Lennon-esque Goodbye Bread was pretty low key, actually. The real surprise is that the fuzz is almost entirely missing from the record. Not only that, the overdriven leads that typify much of his work have been replaced with strings; all of which makes it a true rarity in his catalog. If it’s starting to sound like Segall went Zeppelin’s III on us, that’s a little misleading. Sleeper is a psychedelic folk record more in line with, say, The Incredible String Band, early Bowie or Syd Barrett played through the lo-fi prism of One Foot In the Grave-era Beck. If at times the record comes across as a bit undercooked, give it a closer listen; there’s actually a great deal of care put into each song and in most cases, the arrangements aren’t really missing anything. Segall’s greatest asset has always been his melodic capabilities and the stripped down nature of Sleeper really allows him to show off those skills.

Songs like “Crazy” and “The West” do a lot with a couple acoustic guitars and some harmonies, while “The Keepers” and “Sweet C.C.” keep up the momentum by expanding the arrangement to a full band. Little touches like the occasional fuzz guitar squeal or a shrieking violin can go a long way in helping add distinction from one song to the next.  In true psychedelic fashion, Segall tends to veer more towards the surreal side lyrically speaking. When he sings, “We read the notes/Placed in our hands/Forged in the sands/From distant lands,” it feels almost as if the lines were culled from a psych-folk song from another era, but here more than on most of his records, Segall comes across as awfully sincere; nothing really feels like pastiche.

It would be easy to dismiss Segall’s prolific nature by chalking it up to the fact that all of his projects revolve around three-chord pop songs, but it’s not easy to continually reward listeners with such well-written melodies. Song after song, on Sleeper he delivers the goods via stellar earworms. You really shouldn’t listen to a track like “She Don’t Care” if you don’t feel singing it for the rest of the day. All in all, Sleeper is a welcome retreat from the distortion and although it’s likely temporary, it’s a decidedly good fit for him.