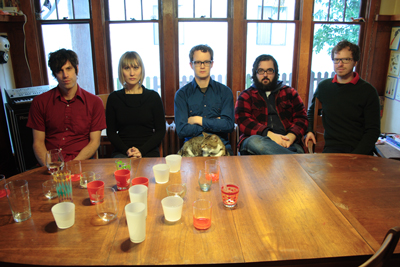 Shrouded in laptop radiation, discarded post-consumer waste basking in the dim-lit back corner of Seattle’s Victrola Coffee Roasters it sits unlikely: a General Electric short wave radio that would probably go unheard anyway over the din of all the caffeinated patrons (if it even worked). An antiquated relic, the awkward appliance now serves merely as mildly ironic decorum for the iPod set sipping double-shots and updating Facebook profiles.

Yet something indefinable, perhaps the soft curvature of its wooden frame, the dull gleam of decades-old varnish, a worn analog volume knob, so corporeal to the touch, reminds of a time when recordings—long before their translation to zeros and ones—still commanded such physical presence. A cobweb would ruin the fantasy; lucky for me Victrola keeps a clean shop.

Bespectacled in Buddy Holly horn-rims, Barrett certainly exudes the sort of literary prowess his lyricism suggests. Latest album Beating Back The Claws Of The Cold finds the Starksboro, Vermont (pop. 1,900) native contemplating a host of remarkable, if perpetually doomed, characters.

“Recently my writing has taken a turn for the darker, Barrett admits. I try to start out writing happier songs, but I write them really fast and after reading them I’m kind of horrified. I’m much more fascinated with the dark side.”

Barrett insists his cross-country sojourn wasn’t motivated by anything “too romantic.” He wanted to move somewhere with a good music scene and had friends out West willing to accept the temporary couch surfer. Five years ago, that was, and by 2007, Barrett had self-recorded The Pica Beats debut of homespun folk melodies, All Mysteries Solve Themselves (Much of Cold was also written at this time).

Outside the streets are freezing solid again in what will quickly become a rather challenging bike ride home for one under-bundled journalist. Near-record snow falls that will shut down much of Seattle in time for Christmas have hardly begun. It’s a brief reprieve from the usual winter rains, as long as you don’t have to drive in it.

“I’m very susceptible to seasonal affective disorder,” Barrett explains. “Every time I complain about weather here, people say `What? You should like it, you’re from Vermont.’ That’s why I left.”

True to its name, Beating Back The Claws Of The Cold sparks humble tinder in the face of the cold months, huddled against the slings and arrows of an unforgiving season. Smoldering lo-fi melodies solder Barrett’s hesitant vocal delivery. Sitar seduction takes the form of intricate instrumentals; oboes conjure a melancholic mélange of desperate narratives. There’s unmistakable fireside appeal, right down to the occasional raggedness of it all (see the static-charged florescence of “Shrinking Violets”). It might not always be polished, but it’s definitely not twee.

“I’ve given up fighting that word,” Barrett says, laughing. “It’s like a slur almost, I don’t agree with it. It’s really hard to have thick skin I’ve discovered.”

He credits his ongoing mastery of Pro Tools as a continual learning process, and getting better at overcoming what he describes as The Pica Beats distinct “lo-finess.”

“The next one is going to be recorded in a studio.”

Prior to our chat, Barrett had spent the last two weeks “writing constantly.” A whole new album is already penned. He credits the seeming disjointed randomness of his verbose narratives to the madness inherent in his spastic writing method.

“Usually the first line of a song pops out spontaneously. Sometimes it’s a line I don’t even end up using, just a placeholder that sounds melodically correct, and then I’ll replace it. Sometimes the first line that pops out will be some random thing I was thinking about. Something I read. The rest follows.”

“I tried to write songs about things,” Barrett laments. “It was too labor intensive and seemed contrived. I wasn’t happy with it.”

Barrett expects the new record will sound something like a poppy medium between the first two albums, in addition to being the first full-on collaboration with the other members of the newly formed live band. Keyboardist Adam McCollom has already started working on the arrangements. Fans hoping for more non-traditional instrumentation are in luck; Barrett plans to feature as many as he can, including marimba and what he nonchalantly refers to as a new “Bollywood” element.

Having only recently solved the surprisingly involved logistics of playing sitar live (he built a stand for it), Barrett seems confident his band will meet whatever challenges lie ahead. Whether it be fending off derogatory categorizations or being surprised an audience actually comes to see the band headline.

“Our last show at [Seattle ‘s] The Comet, we were playing last, and I couldn’t figure out why everyone stayed. Only once we started playing did I realize they stayed to see us.”

Like the forgotten short wave radio stuffed carelessly in the back of the coffee shop, Barrett and his band recall a welcome return to a simpler, humbler sound. It’s an age-old reassurance that music will yet forge onward, re-imagined in countless new forms, though still inviolable against the inclement storms of the lifeless, popular media perpetrating the day.

The Pica Beats : Beating Back the Claws of the Cold