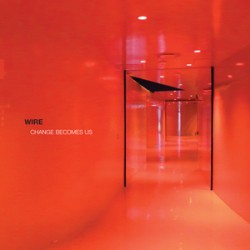 Wire’s been a lot of things over the years — loud, minimalist, raw, glossy, abstract, simple, complex, difficult and commercial — but they’ve never been repetitive. And I don’t mean musically repetitive, but creatively repetitive. Their first three albums — Pink Flag, Chairs Missing and 154 — could have been recorded by three entirely different bands. Their run of albums from The Ideal Copy to Manscape, could have been recorded by yet another fourth band. And when the group reconvened in the early ‘00s with the Read and Burn EPs, and eventually 2003’s Send, they took on yet another direction entirely, which has led a snaky path up to the present. Revisiting the past has never been of interest to Wire, a band that is constantly moving in forward motion.

Yet Change Becomes Us, the group’s 13th album, does, in fact, revisit the past. Each song on the album, in some shape or form, takes root in a sketch or idea from 1979-1980, nine of which were recorded live for the raw, somewhat harsh collection, Document and Eyewitness. Yet, on that album, the songs were still in pupal stage, underdeveloped and likely never intended for a proper studio recording. As the band went on hiatus shortly thereafter, these songs remained unfinished, presumably doomed to stay as such for eternity. These were old ideas, after all, for which Wire rarely had any use.

In 2011, however, Wire began to play newly fleshed out versions of these older, unfinished tracks on their Red Barked Tree tour, in considerably different form. Having been labeled “unlistenable” on more than one occasion, Document and Eyewitness did the band few favors, and the crowd at the actual Electric Ballroom gig at which it was recorded wasn’t particularly impressed either. Yet here, the songs are vastly more listener-friendly. They have a dreamy post-punk quality, much in the same vein as Red Barked Tree, yet with an even broader spectrum of sounds, few of them recognizable from the songs’ original forms.

Given a proper second chance, the 13 songs on Change Becomes Us come alive with a new energy. Wire has had a streak of strong albums and EPs for the past decade, but there’s a simplicity and a beauty to this album that hasn’t been so pronounced since the ’80s, and even then, sometimes didn’t feel quite right. A song like “Doubles & Trebles” sounds like classic Wire — three chords, artfully stoic lyrics from Colin Newman, one-note interludes, subversive hooks — which makes it less surprising that it, originally titled “Ally In Exile,” actually dates back more than 30 years. The cool, moody “Keep Exhaling” has all the intrigue of a Chairs Missing track, fleshed out with a bigger production. “Stealth of a Stork” is more or less straightforward punk, at which Wire has always excelled, yet even more fun is the nursery-rhyme chants of “Eels Sang,” or the gorgeously catchy “Love Bends,” which is one of the most perfect pop songs Wire’s ever written.

All of Change Becomes Us sounds thoroughly modern, yet completely of a piece with just about every segment of Wire’s career, which is a particularly difficult task for a band that’s never been able to stay in one place for so long. The songs partially benefit from not being terribly familiar, or even recognizable; for Wire to re-record Pink Flag material, for instance, would be both disappointing and unnecessary. Not so for Change Becomes Us. Neglected for years after a brief lifespan as performance art, these 13 tracks have been given the gift of being made into carefully crafted songs.