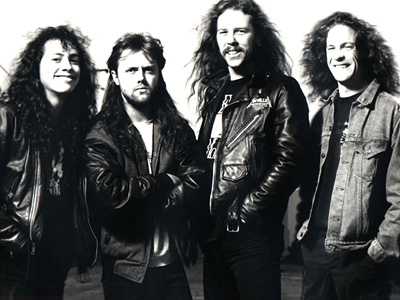 This weekend marks the inaugural Orion Music + More festival, a two-day convergence of indie rock and metal, curated by Metallica. And despite some notable inclusions of metal acts like Sepultura, Black Tusk and Red Fang, the rest of the lineup — Best Coast, Eric Church, Arctic Monkeys — serves to remind fans that they’ve sorta moved on (but the lineup is pretty solid, so good for them!). That said, once upon a time Metallica were a pioneering thrash metal band, which made us want to go back and relive the glory days of thrash, from Kill `Em All on. Here are our picks for the ten best thrash metal albums (one per artist).

There’s a strong argument to be made for any of Metallica’s first three albums as one of the all-time best thrash metal albums. It doesn’t take much digging to find metalheads who consider Master of Puppets the greatest thrash record ever made, and there’s a reason why the band is playing Ride the Lightning in its entirety at Orion. But I wanted to start from the beginning with my own favorite of the band’s, Kill `Em All. Every thrash collection needs to start somewhere, or more accurately, it needs to start here. It’s not Metallica’s most complex record, nor their most commercial, which makes it the perfect balance when you get right down to it. They blaze a trail through straightforward speed metal on “Motorbreath,” then get a little fancy on the dazzling riffs of “Seek and Destroy,” and even rise to old school heavy metal glory on “Jump in the Fire.” They never made a record this fun again, and for that matter, none of their other records inspired the name of a food truck.

The short-lived Swiss band Hellhammer dropped a handful of demos and one EP before splitting up, in the process leaving a massive impact on the burgeoning black metal scene. Yet that band’s Tom Warrior and Martin Ain (who left shortly after their first album) took that raw, dark spirit and applied it to something much bigger, more gothic and atmospheric in nature, but thrashy as hell. Fully realizing the promise of 1984’s Morbid Tales, the band’s second album To Mega Therion is a blend of two distinctly different strains of metal. One is the high-speed power chord crunch raw and sharp enough to compete with their American contemporaries. The other is the doomy, ominous descent into sonic evil, as best displayed through the booming timpani and eerie horns of “Dawn of Megiddo.” Technically, it’s not as flashy as some of thrash’s lightning speed showoffs, but beyond merely rocking hard, Celtic Frost are wizards of atmosphere.

In much the same way that New Wave of British Heavy Metal band coined the term “black metal,” Possessed, a thrash metal outfit from San Francisco, went down in history as pioneers of death metal, thanks in large part to their brutal, aggressive style and an actual song titled “Death Metal.” Granted, some truly twisted bastards would come to make sounds far more gruesome and ugly than this, but for 1985, this was pretty damn extreme. Filled with Satanic imagery, a little atmosphere borrowed from The Exorcist and some chilling bell sounds, Possessed made a darkly destructive thrash metal album for the ages.

Let’s just get this out of the way — any album cover with zombies rising from a grave and a band’s logo sprouting bat wings pretty much has to be awesome, right? Right! It certainly holds true for Dark Angel’s sophomore release, Darkness Descends, an uncompromising ride through a relentless onslaught of tremolo-picked riff storms and metronome-busting beats. It’s not as melodically sophisticated as some of the other albums on this list, but what it lacks in variety it makes up for in brawn. Thirty-five minutes of gut-wrenching thrash, nothing more, nothing less.

Loud, fast, violent and punishing, Slayer’s Reign In Blood set a pretty high bar for extreme metal in 1986. In fact, for a time, they were the most extreme, and their penchant for blending lightning riffs with songs about serial killers and Satan factored heavily into the evolution of death metal. At 29 minutes long, Reign In Blood packs a lot of evil into a short span of time, but every minute is packed with malevolent inspiration. As bookends go, you won’t find as incredible a duo as “Angel of Death” and “Raining Blood,” the latter in particular a stunning case study in how to end an album. And sandwiched between those are eight more incredible explosions of violence and badass riffs, most of which don’t last much longer than two minutes apiece. You can have your Master of Puppets — this is the greatest thrash metal album of all time.

New York’s Anthrax has gone through three singers and various stages, having gone back and forth between escapist comic-book themed anthems and more serious, socio-political songs, and later on, “Twin Peaks”-inspired songs. Among the Living, recorded during the Joey Belladonna era (the first one), leans heavier on the comic book and Stephen King themes, but that said, it does represent a turning point for the band, being one of their best selling and most acclaimed albums. And for that matter, it just plain rocks. Heavily informed by NYC hardcore, it’s an album that steps outside of pure thrash, just enough to stand apart as a wholly distinctive and defining work.

When they formed in 1982 in Quebec, Voivod played a style of speed metal more indebted to the New Wave of British Heavy Metal than thrash, which only makes sense, as thrash itself was just in its embryonic phase. But over the course of the next half-decade, a heavier, more complex sound began to take place. Rush, King Crimson and jazz fusion, as well as the heavier sound of bands like Metallica (whose Jason Newsted joined the band later on), all began to start taking root in Voivod’s approach. And on Dimension Hatröss, the group’s masterpiece, they had reached a new plateau in their transformation. The album is a sci-fi epic with plotlines as weird and twisty as its song structures, which isn’t to say that it’s not accessible in its own odd way — “Technocratic Manipulators” retains some of the anthemic Maiden-esque sound and “Tribal Conviction” is primed for some slo-mo headbanging. Oh, and the CD version contains a cover of “Batman,” which pretty much rules, no?

Often called the “Rush of thrash metal,” even if it makes a lot more sense when applied to Voivod, Switzerland’s Coroner thought outside thrash metal’s sometimes narrow, confining box by injecting their punishing, technical sound with a progressive streak that made a clear distinction between the group and what, by the late ’80s, had become a pretty crowded field of like-minded heshers. Prior to the acclaimed Mental Vortex and the divisive final album Grin, Coroner issued No More Color, a mid-career peak that bridged their more purely thrash beginnings with their increasingly complex progressive metal offerings later on in their career. It’s an intriguing blend of instrumental prowess and maturing songwriting skills, which results in eerie spoken word horror themes like “Last Entertainment,” or quickly transitioning showcases of range and innovation, like “Tunnel of Pain.” There aren’t many albums quite like No More Color, other than Coroner’s other albums, and even then, not exactly.

Sepultura – Beneath the Remains
(1989; Roadrunner)

Brazil’s Sepultura, much like their American peers in Pantera (who aren’t included here for reasons of being more “groove metal”), may very well have played a big role in influencing nü-metal. But let’s not hold that against them. In the late ’80s and early ’90s, the band had a simple goal — to worship at the altar of the riff. Their 1989 album Beneath the Remains is at times a melodic album, and at others a highly rhythmic album (and there’s no debating Igor Cavalera’s drum skills here). But more than anything, it’s a riff album, and Max Cavalera and Andreas Kisser do not hold back. It’s a breakneck ride all the way through, and by closing track “Primitive Future,” it only gets more intense, but as final blows go, that vicious standout is a hell of a way out.

When asked to name my go-to thrash band, my first answer is pretty much always going to be Slayer. Funny thing though, way back as a 12- or 13-year-old listening to Rock 102.1, the first real thrash metal band that caught my ear was Megadeth, whose big singles “Foreclosure of a Dream” and “Symphony of Destruction” still kick ass and you know it. Those were simpler times; Dave Mustaine hadn’t yet become a Rick Santorum supporter, for instance. But later on I would discover how great their back catalog was, in particular Rust In Peace, which manages the feat of containing not only some of their most electrifying instrumental feats, but some of their best songwriting as well. Whether it’s the haunting harmonies of “Five Magics,” or the epic headrush of “Holy Wars… the Punishment Due,” Rust In Peace is a fine mixture of accessibility and chops.