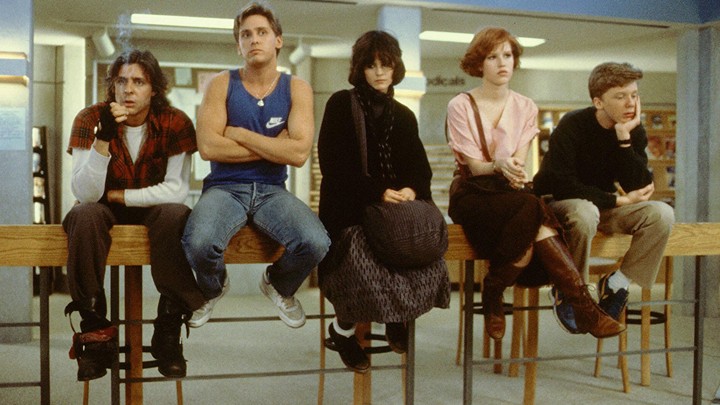 It all started with “Disco 2000.” Hearing that song, back in 1995, I was already thinking about what future high school reunions would be like. I was five years out of high school and it would be five more until Jarvis Cocker wanted to meet “Deborah.” I must say that any thoughts I have about high school reunions are merely conjecture, as I’ve never attended any of mine. However, I’ve been thinking more about going to the next one, which would mark my (inaudible) reunion. Okay, okay, it will be the 25th. Hearing “Disco 2000” again recently brought all that sense of nostalgia back and got me to thinking about other high school reunion songs, or merely songs that might fit in with a reunion theme.

I, of course, have to start with the song that triggered this Top 10 list. I’m sure you’ve already heard it. If not, you are depriving yourself of one of the best songs from one of the best bands of the Britpop era. “Disco 2000,” from Different Class, tells the story of a boy and the girl next door, their awkward moments growing up together, and his suggestion that they meet up in the year 2000 to see where their lives have taken them, though claims are made about those lives that make the outcomes seem inevitable. I had my share of grade school and high school crushes, and though Facebook has seemingly taken the mystery out of wondering what to expect at a high school reunion, I still sometimes wonder about those “could have been” moments. The lines that particularly resonate with me at this stage are “I never knew that you’d get married / I would living down here on my own.” I think Alec Sulkin said it best in a tweet, “It’s a ‘think about that girl from high school’ kinda night.” – TT

There seems to be a notion that exists in television and in song that a reunion can also be a second chance on a missed opportunity. And even in a detached, fictional setting, it’s hard not to get swept up in the excitement and the romance of it all. Most songs by Stars seem to have that climactic, romantic quality—especially on 2004’s Set Yourself on Fire—but with “Reunion,” there’s practically an entire movie script attached. Torquil Campbell remarks to an old friend and proverbial one that got away, “your face is all that hasn’t changed/ you’re reassembled just like me.” And by the chorus he’s pleading, “All I want is one more chance/ to be young and wild and free.” He knows his window is closing, and that everyone will move on and grow up, but maybe, just maybe, he’ll have his chance at reviving that intangible teenage sensation. – JT

The Kinks – “Do You Remember Walter?”

Nobody ever grows up to be exactly the way they imagined, but Ray Davies’ recollection on “Do You Remember Walter?”, from the nostalgia-driven Village Green Preservation Society, is an expression of regret about how much a close friend has (most likely) changed. In his reminiscences, Davies laments, “Isn’t it a shame the way our little world has changed,” while recounting the times Walter played cricket in rainstorms and pledged to save his money and sail out to sea. But later on, Davies faces the unfortunate reality that “if I talked about the old times, you’d get bored and you’d have nothing more to say.” And it’s hard not to escape that fear of being with so many old friends who are nothing like they once were, and might not even recognize you. But Davies still ends on a positive note overall, noting that “people often change, but memories of people can remain.” – JT

“I used to be carried in the arms of cheerleaders.“

This line is repeated during the closing moments of The National’s “Mr. November,” the climactic closing song from 2005’s Alligator. Though the song might be about the pressures of finishing an album or even subtle references to the country as a fledgling democracy, this line always hangs me up. I see it as meaningful for either those who really were popular in high school, missing those heady times, or for those who weren’t and merely rewrite history in the hopes of reinventing themselves. I certainly never used to be carried in the arms of cheerleaders, but who knows, it’s never too late. Right? – TT

There’s probably no venue so perfect for revenge as the high school reunion. It’s a common television trope, a recent example being an episode of “30 Rock” in which Liz Lemon planned to show all of the popular kids how successful the school nerd had become, only to discover that they all considered her a bully. But Ben Folds, a pop music nerd if there ever was one, puts it brilliantly in “One Angry Dwarf and 200 Solemn Faces,” a kiss off to all of the jerks in school that picked on him. He goes right into sass mode, sneering, “Don’t give me that bullshit, you know who I am/ I’m your nightmare little man/ think you stole my lunch money, made me cry.” As to whether or not this scenario ever plays out, I can’t say. But I know we’ve all thought about it. – JT

Simple Minds – “Don’t You (Forget About Me)”

This one might seem like somewhat of a “gimme.” But then again, so might every song on this list. As the thematic central soundtrack song for The Breakfast Club, “Don’t You” exemplifies this topic perfectly. At reunions, supposedly all past cliques, prejudices, and past hurts can be forgotten and transcended, just like in the movie. I think this changes with the passage of time. What I mean is, after everyone grows up, gets married, has kids, has serious, mind-numbing, soul-crushing jobs and such, the reunion becomes less about seeing those people you were close to in high school and just spending an evening getting drunk with people who shared and experience with you. Or, maybe I’m misreading the whole thing. Remember, I haven’t been to one of these things, yet. Aside from the song’s title refrain, I also like the line, which echoes Jarvis Cocker, “Won’t you come see about me / I’ll be alone, dancing, you know it, baby.” – TT

from Boys and Girls In America (Frenchkiss-Vagrant, 2006)

Every Hold Steady song, to a certain degree, is about teenage debauchery. Sometimes it ends badly, usually it involves hilarity, and everyone’s usually drunk or high. In other words, it’s what high school is like for many kids, and in “Massive Nights,” from 2006’s Boys and Girls In America, the recollection could have been last week or 20 years ago, but it’s told with a twinkle and a smirk from Craig Finn. He recounts the times at parties in which a fight didn’t break out, and the times when a chaperone broke up some too-close dancing. You can almost picture two grown adults laughing over their days of youthful indiscretion over a beer and pictures of their kids. Almost… – JT

“Hold on to sixteen as long as you can.“

Doesn’t this say it all? Mellencamp’s “little ditty” about this pair of young lovers is another one that seems to fit this theme of looking back with a reverent eye toward younger days. Of course, the next line after the one above is, “Changes come around real soon, make us women and men,” and the chorus says that “life goes on long after thrill of living is gone.” Ain’t that the truth. As teenagers, we couldn’t wait to get out of high school. Now, as adults, we wish we had it so easy as teenagers. I think this is also the draw of reunions, a subconscious desire to go back to a time when things seemed easier, more fun, and the whole world lay in wait for us. We all end up in different places and different situations, but we all started in the same place, and that counts for something. – TT

The allure of the high school reunion is part curiosity about how much or how little everyone has changed, and part nostalgia about a romanticized past. And even the nerdiest of us had some great times back then, certainly. But on closer inspection, it’s probably unlikely anyone would want to trade their adult life for social awkwardness, unpredictable hormones and the general feeling that every minor problem is a crisis. James Murphy knows this feeling all too well, as he put it so eloquently on the title track on Sound of Silver: “Sound of silver talk to me/ makes you want to feel like a teenager/ until you remember the feelings of/ a real live emotional teenager/ then you think again.” – JT

Yes, I’m going back to the Breakfast Club well again. While Hunky Dory‘s leadoff track “Changes” might have not played in the film’s soundtrack, its lyrics were used as an epigraph to the film:

Every five or ten years, a lot can change. Reunions give us all the chance to catch up, in person, to find out not only how people have changed physically (let’s face it, everyone is curious about that aspect of everyone’s lives), but also emotionally. While we may have made all those predictions in high school about where our classmates would have ended up, I’m sure most of us would be surprised at some of the results. And while we all used to hope that we would show up at a reunion as rich, famous or powerful, at least some of us are realizing it isn’t that important. – TT