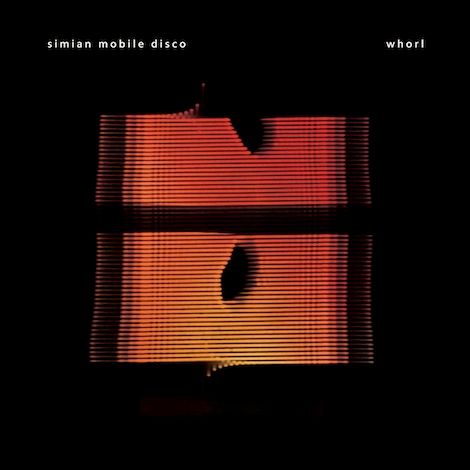 Simian Mobile Disco emerged just under a decade ago and, amid the immensely crowded dog-pile of electro-pop, were able to claw their way to the top of the heap. In addition to a fantastic band name, this ascent was probably, in part, due to their jumpy remix of Justice’s “We Are your Friends,” which helped make house music palatable and user-friendly to beer-slugging audiences who may have been nervous about the genre’s feminized club ethos as well as those who felt techno was simply for hedonistic airheads. This was also an era where groups like SMD along with Justice and MSTRKFT and so on, eschewed the solitary “producer” role and opted for a sexier and more panache role. Simian Mobile Disco’s remix roared through Justice’s sets, and was met with affectionately heavy metal-esque aggression.

Since the bubbly party-ready Attack, Decay, Sustain, Release it appears the London duo have gotten a pinch long in the tooth. This aging process on Whorl isn’t necessarily a bad thing, as the record presents a far more introspective and self-aware amalgam of beeps and pops. The first half of Whorl is a bit awkward, and sometimes dull, as it breaks itself in to a more reluctant pace. The ethereal “Redshift” opens with seemingly the same set of timbres that powered “We Are Your Friends.”

“Tangents,” meanwhile, sees the two age gracefully and rekindle the charm with 16-bit synthesizers and “Iron Henge” sounds content to nod goodbye to their Parisian counterparts. However, the fervor never increases to the stadium-size bursts which screamed out of 2007’s “Tits and Acid.”  “Sun Dogs” seems to be Simian Mobile Disco’s final attempt to see if they can still run with their 2007-era party epics but ultimately the duo seem to find that their ankles can’t sustain that kind of aggression anymore, and the track finds solace in ambience. Whorl is a far more appropriate soundtrack to overpriced vodka than it is for sweaty jumping fits.