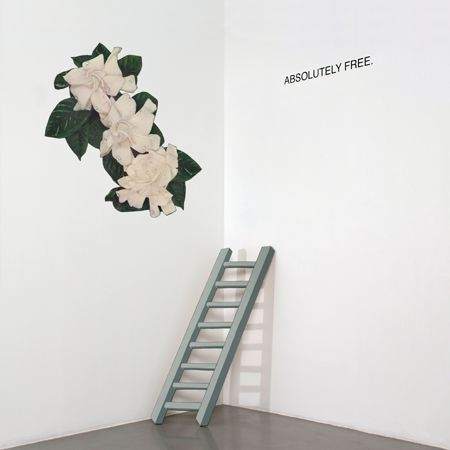 When Matt King, Moshe Rozenberg and Mike Claxton formed Absolutely Free in the wake of the dissolution of their former band, DD/MM/YYYY, they left their rulebook behind. Where that math-rock-leaning group was heavily based in live performance — even their name was customizable to be changed to the date of whenever they were playing together — Absolutely Free found the trio casting off the constraints of the stage to focus their energy on finding their spark within the studio. And so when the Toronto trio began writing and recording the songs that make up their Lefse Records-released debut album, they ignored any potential live aspect in favor of rediscovering the joy in just getting lost in layers of sound. The result, as the punchline in their name implies, was freeing.

But as the group explained to me in a recent interview, “nothing is absolute and nothing is free.” King, Rozenberg and Claxton have a lot of history playing music together — history that doesn’t just disappear with the end of one band and the start of another. That’s important to remember when listening to their self-titled first album, for as much as it’s a fresh start, it feels like the work of a cohesive and well honed unit. There are countless ideas stacked upon each other — layers of gorgeously unfolding sound — but at its heart, Absolutely Free sounds like the work of three musicians who mastered the art of taut synchronicity before going free range.

Sonically speaking, Absolutely Free is quite beautiful. There are moments on the album, such as during the cosmic intro to “Earth II” or the ethereal progression of opening track “Window of Time,” that sound like the result of an ambient or progressive electronic binge. But they’re also not campaigning to be the next Tangerine Dream; Absolutely Free is a rock band. They’re an innovative, progressive and unconventional rock band, but a rock band all the same, and when they settle into a drone-heavy psych-rock groove like “Beneath The Air,” they showcase the kind of grooves and densely layered chops that put them in a similar category as indie heavyweights like Deerhunter. And they stretch out quite a bit at that; they tackle a powerful electronic pulse on “Burred Lens,” a harmoniously fuzzy garage sound on “My Dim Age,” and an Apache beat dance party on “Vision’s.”

Absolutely Free save their most ambitious, cosmic widescreen journey for the end, taking the album out via planetarium processional in the stunning, eight-minute “Spiral Jetty.” It’s a hypnotic work of synthesized etherealism and visceral throb, seemingly at odds with each other, yet they combine beautifully, in a way that only a band with a mutual understanding that goes deeper than simple curiosity can create. That’s not to say that Absolutely Free is a perfect album; there’s growth ahead of the band, certainly. But it helps to have a starting point that’s a bit farther along than most.

Bear In Heaven – Time Is Over One Day Old

Listen: Absolutely Free – “Beneath the Air”