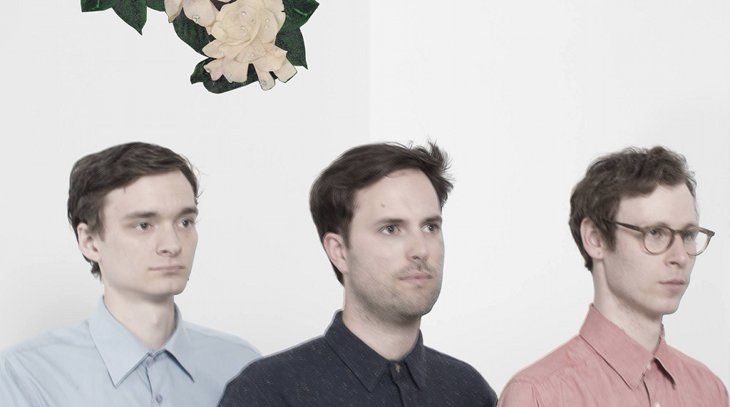 Matt King, Mike Claxton and Moshe Rosenberg have been playing music together for a long time — though not always at the same time, and not always in the same capacity. King and Claxton were founding members of Toronto-based math-rock outfit DD/MM/YYYY back in 2003, which Rosenberg joined as a full-time member four years later. But after eight years, the three musicians felt something needed to change, and started fresh in 2012 with a new direction, a new sound and a new name — Absolutely Free.

In a phone call from their native Toronto, keyboardist and multi-instrumentalist King notes that DD/MM/YYYY had grown stifling for the trio. In desperate need for a change, they began writing songs in a totally different way than when they began, which led to the flourishing of a new creative spirit. “A couple years into it and we’re really starting to understand what our original vision was,” King says. “And how we’re able to achieve that.”

On Oct. 14, Absolutely Free will release their self-titled debut album via Lefse Records. It’s a vibrant, yet complex mixture of a variety of different sounds — progressive electronic, Krautrock, indie rock and psychedelia — that gels into one ever-changing, but cohesive whole. At time’s its reminiscent of recent albums by Bear in Heaven, while in others, it reflects a long Teutonic tradition of beautifully abstract sounds. In Treble’s Absolutely Free interview, the band discusses the conflicted meaning behind their band’s name, as well as the freedom they’ve taken on to expand the limits of their creativity.

Treble: After working together in DD/MM/YYYY, does Absolutely Free feel like an entirely new band?

Moshe Rozenberg: Maybe that’s a good reason for naming it Absolutely Free. You know, there’s nothing — nothing is totally free and nothing is absolute. We’re trying to write music in a different way, but … I guess everyone has this history of experiences in their lives. And specifically writing music with other people, we’ve grown to really know each other’s strengths and weaknesses and play off of those when negotiating these new creative ideas and ideologies.

One other huge distinction between Absolutely Free and our old band is, basically the three of us are musically more elastic. We play through one another, and in our roles… there’s a lot of gray area. We don’t really have a main, leader guy. We all help each other work through different ideas. If I’m doing drums on the song, I’m not playing just what felt right — we craft every single… element, as the three of us. And that’s one huge distinction. 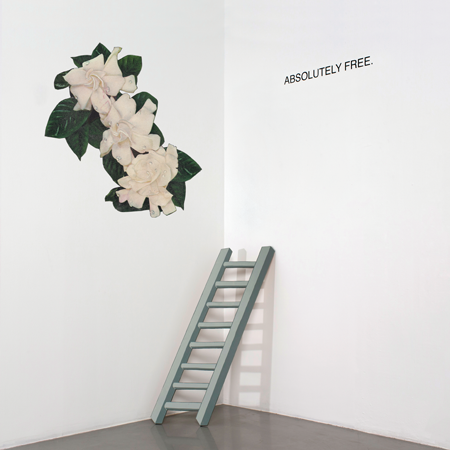 Was there a specific direction in crafting the new album?

Matt King: In the past, we’ve been a fairly performance-based band. We’d write the music and think about it as we’re playing our instruments. In this band we’ve been more about listening back and thinking about it. So when we decided to work on our full-length record, we thought it’d be a good idea to not even think about playing these songs live. Just thinking about how it sounds on the recording, how it sounds to us as listeners. And that’s opened up so many possibilities. Instead of just me playing my MG-1 synthesizer, like maybe we’ll have that low in the mix, but in the second chorus we’ll have Mike’s… SH-2000. And I think that really freed us up to make new sounds and think about new sounds that we like, and try to replicate those with our own melodies.

MR: It’s funny too, listening to the album, hearing so many little different psychedelic sounds passing you by as a listener. And thinking about it, how many fucking sounds didn’t make it on to the record. Whatever you hear, times a hundred, that’s how many things were just left muted in those recording sessions. A lot of reworkings.

Are there any artists or styles that have a particular importance to everyone in the band?

MR: There are definitely common grounds, but we’re pretty eclectic. I’m a huge fan of all the Cluster and Eno stuff. That kind of beautiful minimalist and somewhat ambient stuff. I don’t know if these guys are as into it, but those elements are something that I have brought to our sound.

MK: I like Kraftwerk and I’ll listen to Tangerine Dream, so that’s not too far off. I was listening to Terry Riley this morning. There’s definitely lots of crossover. I was listening to some Afro-funk compilations for a while. We’re all looking in the same areas, but we’re all going out on small tangents and bringing them back. I didn’t know about a band like Harmonia until he brought them to us.

MR: Just the other week we did an Under Cover thing for the AV Club. And we did a song by The Jam, and we are so unable to recreate that. Like, just learn the parts, play the cover. And we just can’t. It just ended up sounding like our band, and maybe that’s a bit insulting to The Jam, but whatever. If we did our best to recreate the Beatles … we could never do it.

We’re unable to emulate. It can’t be done.

What did Mike Haliechuk (Fucked Up) bring to the recordings?

MR: We’re such different people and that’s a pretty ideal relationship, working relationship that you can have with someone, who you’re hoping is going to give you some insight. The three of us are pretty tight-knit in our thinking and in our approaches to making art, that having Mike there was awesome. Almost a wake-up call at times. He’d tell us when we were over-thinking or getting carried away. At one point we had a song in a weird time signature and — what’d he say? — “you guys need to stop being so existential with your rhythm.”

And we were like ‘What are you talking about? It’s so simple! Watch me dance to it.’

MK: There was a lot of emails that he sent on mixes and revisions we did in our studio that were written in Caps Lock.

MR: He’s a very brutally honest person and he doesn’t care if you like him or not. I think he really benefited the album, and I’m really happy and grateful for that.

You alluded to the contrasts in your name, Absolutely Free — what kind of freedom does it represent?

MR: For a bit of context, and as you well know, this project formed from another project. And we were feeling a little bit trapped in that other project. We’d show up to band practice and it was no longer an escape from the outside world. It was no longer an escape from our lives. It was burdening in one way or another. To form a project that had us excited about life and music and love was a very freeing thing for us.

MK: Absolutism and freedom — they’re kind of contradictory. We’re not making free music, because we’re bound to all this history and all this music we’ve accrued in our life and experiences. But we’re also free to make these connections and carry these expressions into the future and share them with others, and create new experiences for others.