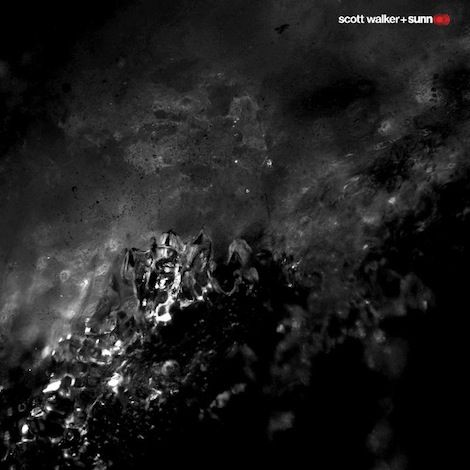 It’s tempting to chalk the existence of Soused, the collaborative album between Scott Walker and Sunn O))), up to inevitability. Greg Anderson, Stephen O’ Malley and Scott Walker are each synonymous with a particularly overwhelming kind of avant garde doom, if in very different ways. Walker started a long, slow process of artistic evolution in the early ’80s that has yielded a sparse but breathtaking series of intense albums, achieving a career high with 2006’s beautifully horrific The Drift. Yet Sunn O))) has pursued a more meditative and ambient kind of musical force, their two-guitar chest-vibrating compositions occupying a strange space between metal and ambient music. And since as early as 2000’s ØØ Void, the shrouded Seattleites have been collaborative in nature, whether incorporating Nurse With Wound’s sound collage, combining forces with Boris’ sludge or, earlier this year, crafting unexpectedly brighter jams with Ulver. Given Sunn O)))’s tendency to gravitate toward similarly magnificent experimental artists, teaming up with Walker doesn’t just sound like a good idea, but actually perfectly logical.

O’ Malley and Anderson, in fact, sought Walker’s musical contributions at least five years ago for their 2009 album Monoliths and Dimensions, which Walker turned down. But he made an appealing counteroffer after the fact: Recording an entire album together. And that album, it turns out, is a remarkably vibrant and colorful piece of avant garde rock. Admittedly, a lot of those colors are varying shades of smoke and obsidian, but they come tinted with unexpected bright flashes. That’s maybe not as surprising for Walker, whose career began in the ’60s with several gorgeous albums of cinematic pop, but it’s Sunn O))) who deliver the giddiest surprises in leadoff track “Brando.” Over a glossy, pretty stream of synthesizer, one guitar plays a “Sweet Child O’ Mine” style riff, while the other offers some crude, punk-rock string bends. It’s a left turn before the ride even really starts, and good fun at that.

It’s also temporary. Within the first minute of “Brando,” Sunn O))) retreat back into the gloomy darkness of their amplifier drones, as warbles and whip cracks provide an odd and unsettling kind of percussion beneath Walker’s vibrato moans. The upbeat call-and-response riffs return during the chorus, however, and by this point it should be abundantly clear that Soused is neither a typical Scott Walker album, nor a conventional one for Sunn O))) either. It’s a wonderful mutant creation of its own, and only grows more fascinating the deeper one sinks into its treacherous caverns.

“Herod 2014” is more Walker than Sunn O))) in style, punctuated with heavy use of tonally abrasive modern-classical synthesizers, but the fact that O’ Malley and Anderson’s guitars blend so well with his compositional approach is a strong indicator of the compatibility of the two artists. Also: “Herod 2014” is absolutely frightening, compounded by the fact that each artist thrives on abrasion, darkness and sonic horror. Which isn’t to say they’re not capable of their own twisted anthem, which on this record is “Bull.” The pounding percussion and melodic riffs of the chorus aren’t just powerful, they’re strangely catchy. Though you almost don’t see its return coming after its ominous and atmospheric verses, which find Walker alternately speaking Latin and uttering absurdities like “They’re leaping like a Riverdancer’s nuts.” Not that his charmingly fucked-up humor should come as much surprise to anyone after 2012’s Bish Bosch. What is surprising, however, are the menacing effects and almost Swans-like assault that erupts in the middle of “Fetish.” It’s harsh, but satisfying in an inexplicable way.

That Soused ends with a song titled “Lullaby” should strike one immediately as a red herring. Outside of “A Lover Loves,” nothing any of these guys have done of late has much resembled an actual lullaby. It’s a hushed song — mostly — but the creepiness factor persists, and Walker’s reading of lines like “Tonight my assistant will pass among you” and “The most intimate personal choices and requests central to your personal dignity” are so intense and carefully delivered that, regardless of meaning, you’re actually much more likely to be kept awake by the eeriness of it all. It’s in moments like this that Sunn O))) and Walker prove the merit behind their collaboration; there aren’t many artists that can craft such widescreen demonic atmosphere with such artful beauty. The hooks that they manage to fit in between the ambiance and the discord is just an added benefit.