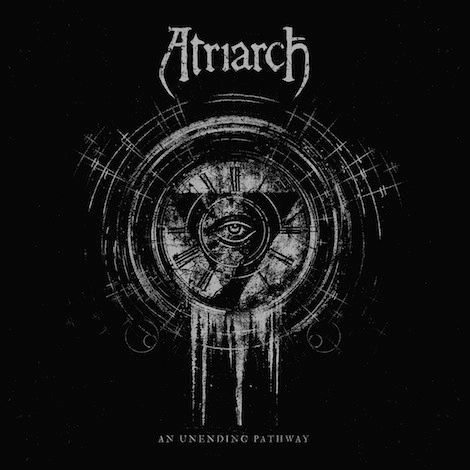 If you’ve been paying attention to the reviews I’ve written this year, you won’t be surprised when I say that 2014 has been fairly mixed (at best) year for heavy music, at least as far as new, full-length releases go. In particular, blackened doom records have left a decidedly milquetoast taste; albums like Culted’s Oblique To All Paths knocked on the door of greatness but played it far too safe. While a sense of raw-talent is definitely there to be harnessed, a lot of bands simply haven’t taken it to the next step just yet — their promise not enough to make up for the distinct lack of ambition or artistic execution.

But then again, some bands just have it down. Portland’s Atriarch already boast a rich history of diversifying blackened doom by digging into other chapters from metal and rock history, but An Unending Pathway — the band’s third LP — takes a step further into the hazy line between goth rock and black metal. Channeling the likes of Mayhem, Saint Vitus, and Bauhaus, they tap into a sound that is strikingly original yet perfectly at home in the grander scheme of modern metal. Each of the seven tracks here resemble a dark prayer — moody, dynamic meditations that are just as worthwhile in their soft, serene moments as they are at their loudest and most climatic.

The lesson that many a band can learn from Atriarch is the delicacy with which they balance diversity and consistency. Though each track boasts its own distinct flavor — from the steady, tom-driven fury of “Collapse” to the creeping, doom-centric “Allfather” — there is a strong sense of unity to this collection of tracks that was missing from many other-wise intriguing releases this year. Though the band incorporates a wide arsenal of vocal and sonic weaponry throughout each track, they do so in a way that recalls the specific mark that a band like Deafheaven leaves on the listener. Sure, many a band could toss together black metal, doom and goth-rock influences, but it is rather unlikely that they would come anywhere close to creating the mesmerizing, trance-like aura that Atriarch craft throughout An Unending Pathway.

The way to craft the perfect metal album — at least in this writer’s opinion — is to focus on great songwriting first, and then hone in on sharpening the metal elements second. Atriarch manage to create an album that is very much of its genre, but also one that reaches beyond it in a way that no metal traditionalists or conformists could have mustered. Yet An Unending Pathway is also a far stretch from what some critics would deem “hipster metal.” This is dark, gritty blackened doom, with some well chosen gothic overtones, the combination of which finds Atriarch reaching a new peak that is as mesmerizing as it is devastating.