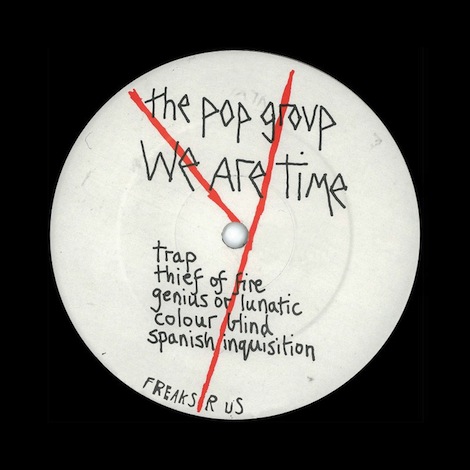 On the second leg of her Strange Mercy tour in 2012, St. Vincent’s Annie Clark closed out her sets with a cover of The Pop Group‘s “She Is Beyond Good and Evil.” It’s actually sort of fitting that Clark, of all people, would take on the infamously abrasive post-punk outfit. Her own uniquely skewed pop sound has a trace of Mark Stewart’s abrasive scratch to it, even if hers is a bit more accessible and approachable. More importantly, she’s one of only a few rare, wonderfully eccentric artists that can actually properly do a Pop Group song justice.

More than any other member of the UK post-punk class, The Pop Group truly challenged conventional concepts of rhythm, arrangement, melody — essentially the very basic things that make up a song. Much can be made of their openly confrontational lyrical content and leftist politics, which are indeed an essential part of who The Pop Group were. But the vessel for those messages was messy and violent. That’s what made it exciting, of course. Stewart & Co. blended the agit-funk of Gang of Four with the atmospheric rhythms of dub, fed through an altogether explosive sensibility that intensified both. They didn’t last that long, but their brief existence still leaves ripples.

The Pop Group officially released only two full-lengths in their brief career: 1979’s Y and 1980’s For How Much Longer Do We Tolerate Mass Murder? But they had a bit more recorded material than that, some of which was compiled on We Are Time, which has now been reissued by Freaks R Us. It’s an odd mixture of studio tracks, live takes, BBC sessions and other oddities, all of which put the band’s shrapnel dynamic on full display, to varying degrees of fidelity. The jittery “Trap” is an early highlight, with the group veering closer to the Beefheart-ian punk of Richard Hell and the Voidoids, while “Colour Blind” offers an unusually low-key sound for The Pop Group — albeit one that still maintains a bit of off-kilter weirdness. The live versions on the album are a bit harsher, quality-wise, though it’s entirely fitting given the menacing performances of the title track and “Spanish Inquisition.”

Released in conjunction with We Are Time, Cabinet of Curiosities has a similar hodge-podge of tracks. And just like that other compilation, it’s a mixture of — true to its name — curiosities, all of which fall somewhere between interesting and outstanding. Not that all of them are necessarily essential; the live recording of “Karen’s Car” that ends the record is only a notch above bootleg quality. But there are certainly plenty of highlights — the no wave disco of “Where There’s a Will,” the Peel Session recording of “We Are Time” and the alternate version of “Amnesty Report III” among them.

As an introduction to those without a working knowledge of The Pop Group, We Are Time and Cabinet of Curiosities will likely prove a bit more impenetrable than their studio recordings. But for those who have worn out their copies of Y, each compilation offers several worthwhile nuggets, be they examples of the band in onstage hurricane form, or studio experimentation. The Pop Group’s legacy, however abbreviated, is given at the very least a noteworthy appendix with these two releases. More importantly, they’re an incentive to revisit the band’s most potent statements, which have lost none of their sting after 35 years.

How The Pop Group’s ‘Y’ captured a joyful chaos