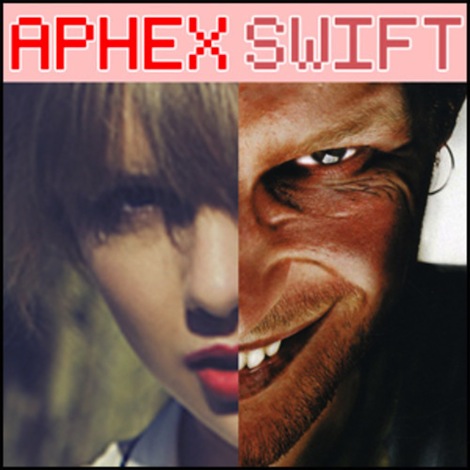 When I first read that some twisted mastermind named David Rees had mashed up Taylor Swift’s country-pop ballads with with Richard D. James’ sporadic, ambient electronica, I thought the notion was pure insanity. Sure, it might sound interesting in the same way that a fusion between Elton John and System of a Down has inherent, if short-lived, shock value, but it seemed unlikely that the effort would have any long-lasting musical value. After all, the best mashup albums (such as 2011’s 13 Chambers or 2004’s The Grey Album) operate on a level above ProTools proficiency to reveal artistic comparisons that the listener always knew, deep down, but had never fully realized before. But what on earth could Aphex Twin and Taylor Swift really have in common?

Then came the first connection I could recall between both artists: The way both reacted when publicly dissed, in some way, by pop music’s resident bully, Kanye West. In short, Swift still refers to West’s infamous MTV Music Video Awards mic-snatching with good humored jests among friends, and when West’s team practically hijacked James’ “Avril 14th” for use on 2010’s “Blame Game,” the producer passed the incident off with a shrug, waiting four years before bringing to public attention. I bring these incidents up, not to foster any further grudges against West, but to note the similarity between Swift and James’ off-stage personalities. While each artist’s respective aesthetic and fanbase could not be more polarized, they both seem to be introverted and relatively soft-spoken when it comes to their public persona.

It’s that connection, the fact that you can envision both artists writing tirelessly in their bedroom or home-office, that makes Aphex Swift work. Genre differences aside, both artists put all of their hearts and energy into their work; it only makes sense that stand-out moments from Swift’s career would seem even more alive when paired with some of James’ more intimate compositions, drawing mostly from Richard D. James Album and Drukqs. Rees exercises an intimate understanding of both artists’ discographies, crafting moments that make Swift’s words feel more out-right artistic and James’ production more emotionally intense. Polarized opinions aside, songs like “To Cure a Weakling McGraw” and “Why You Gotta Be So Flim” become intimate, glitch-fueled ballads that could give a modern chanteuse like Lykke Li a run for her money. No matter what Aphex Swift makes you feel, it does make you feel — and that’s exactly what Rees intended.