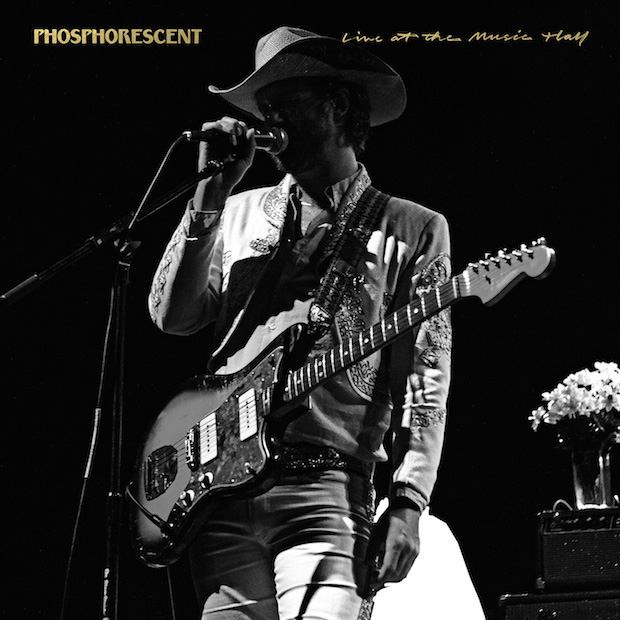 On Feb. 17, Phosphorescent will release Live at the Music Hall, a live album comprising performances from four shows at the Music Hall of Williamsburg in December 2013. The Phosphorescent live album features 19 tracks from throughout the band’s discography — notably Muchacho, Here’s to Taking It Easy and Pride — which were chosen from more than 10 hours of material recorded at the shows.

The album was inspired by Bob Dylan’s Hard Rain, according to a press release, and Dead Oceans has shared a 10-minute live version of the band’s 2010 track “Los Angeles”. Listen to that track below, and check out the album’s tracklist.

Phosphorescent Live at the Music Hall:

1 Sun Arise! (An Invocation, An Introduction)
2 A New Anhedonia
3 Terror In The Canyons (The Wounded Master)
4 The Quotidian Beasts
5 Tell Me Baby (Have You Had Enough)
6 Nothing Was Stolen (Love Me Foolishly)
7 Dead Heart
8 Down To Go
9 Song For Zula
10 Ride On / Right On
11 A Picture of Our Torn Up Praise (Solo)
12 Muchacho’s Tune (Solo)
13 Wolves (Solo)
14 Joe Tex, These Taming Blues
15 Los Angeles
16 A Picture Of Our Torn Up Praise
17 South (Of America)
18 Wolves
19 At Death, A Proclamation