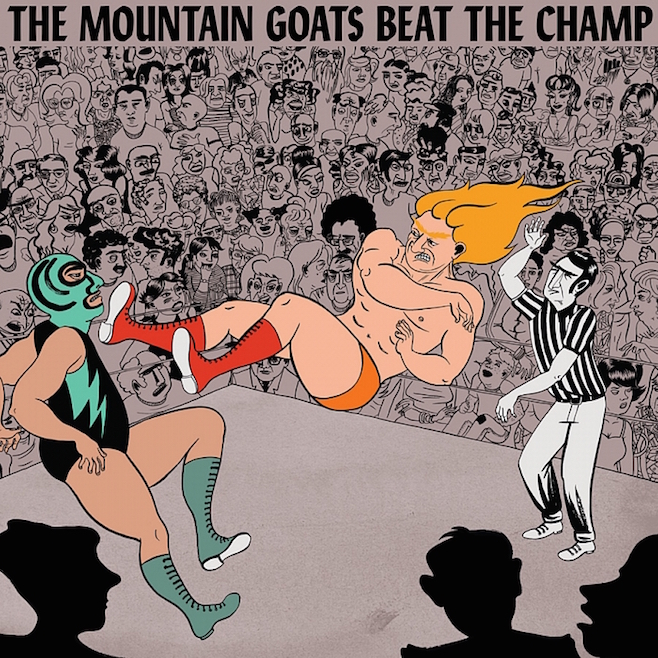 John Darnielle took a brief break from performing in 2014 to focus on his literary career, having released the novel Wolf in White Van last year. But he’s back in Mountain Goats mode in 2015, with a brand new album on the way. The Mountain Goats‘ new album and follow-up to 2012’s Transcendental Youth, titled Beat the Champ, will be released on April 7 via Merge. It’s an album mostly about and inspired by professional wrestling. Darnielle has released a new song from the album, titled “The Legend of Chavo Guerrero,” which was inspired by wrestler Chavo Guerrero Jr., whom Darnielle calls a “childhood hero.” You can stream it below.

That’s the album art above, which is awesome, and was designed by Leela Corman. Darnielle shared a few thoughts about the album via Tumblr:

Some people might be thinking to themselves, JD, wrestling, I don’t know, I’ve never really been into wrestling, but did I steer you wrong with the Bible album, even though you may not have been super-into the Bible? Fear not. In a world of false promises and hollow gimmicks, please rest assured that the old maxim still holds true, whether scrawled on the back of a claim check or carved into a bench in an abandoned locker room: you can’t trust much, but you can trust the Mountain Goats.

The songs are “really more about death and difficult-to-navigate interior spaces than wrestling,” Darnielle adds.

The tracklist hasn’t been revealed just yet, but you can check out the group’s upcoming tour dates below.