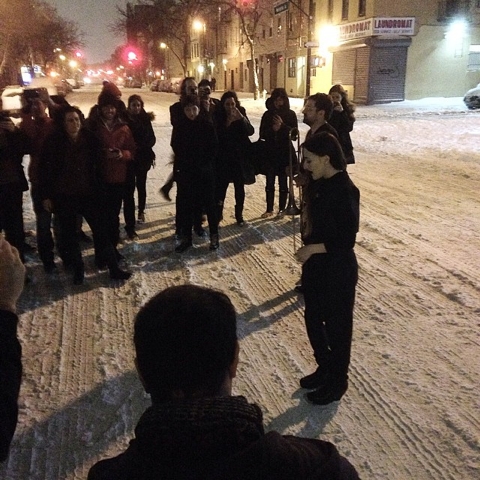 Last night, Zola Jesus performed in Brooklyn, New York at the Greenpoint metal-centric venue St. Vitus, in the middle of what was expected to be a pretty intense winter storm. It didn’t exactly turn out to be the case, exactly, but Zola Jesus made the most of the snow-covered scene, regardless. BrooklynVegan reports that during the show, she took the show outside with a trombone player to perform the song “Nail,” from her newest album Taiga, in front of a crowd on the sidewalk. Her music always seemed like a perfect fit for a snowy scene, anyhow, so why not embrace it? That’s a photo of the performance (courtesy of Dima Djurchin’s Instagram), and you can watch a video of the performance below.