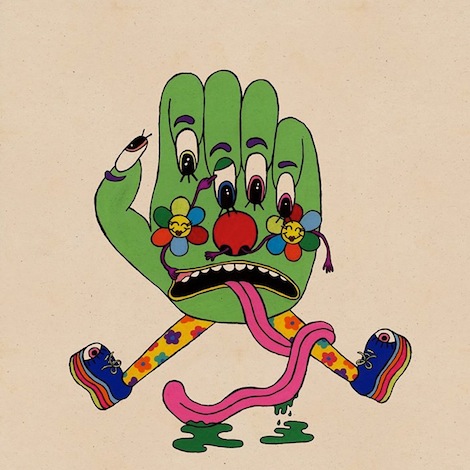 I actually read part of a book for this one, which is (partly) why the review’s a day late: Electronic artist Ben Neill once asked, “What is the distinction between popular and high-art computer music?… The question can be answered in one word – rhythm. It is the beat that draws the dividing line between serious and vernacular, visceral and intellectual… The two worlds of high art and popular electronic music may use slightly different tools, but their aesthetic approaches are most clearly defined in the presence or absence of repetitive beats.”

That sounds sexier than fishnets on a pelican, and it describes why Dan Deacon’s fourth full-length album is entrancing and beguiling, yet still elliptical in a way. Never in the Baltimore electronicist’s career has beat taken so many forms, shapes and notable absences, and never have the messages within the beats played out in such a traceable way. Gliss Riffer is a treat for those of us who sit hunting for subharmonic variances from bit to bit, myself included. It’s a gloriously complex artifact that makes me want to defer most questions about what it adds up to for as long as possible.

In strictly constructive terms Deacon works out his intellectual questions both mathematically and artfully. The pulse is manic throughout most of the album, but he’s squeezing in a lot of information in every eighth. “Meme Generator” is a frenzied twist of alarm beats and random, Japanese-tinged vocal samples, with just enough melodic variance to move from sector to sector. “Sheathed Wings” weds a frantic drum pattern towards a very basic, nearly gospel-sounding song construction that leaks out its harmonies like a bathtub drip. Even within the strict rhythms Deacon gets some variables out there, something that’s a hallmark of the whole album: It’s as dependent on subtle shifts in tone and waveform as anything he’s done, and the turns are more rewarding on headphones.

Deacon offers up a few more lyrics on Gliss Riffer than he’s used to, and as you might expect they more or less fight within the mélange. “Sheathed Wings” finds the singer trying to “move a little bit closer,” but unless Eno’s your idea of a soul singer the multi-chorused Deacon still sounds remote and frustrated – which is probably the point. On “When I Was Done Dying,” which builds and tumbles like a folk song, he laments “I should have gone deeper, but I’m not so brave.” I, however, think that’s a fantastic thing to admit in almost any musical setting, especially one where the sense of motion is so constant that it’s understandable anybody would get lost, or lose themselves. “Take me out of my mind,” he sings in “Learning to Relax,” in a Vocoder haze against a simple melody that suggests M83 glazing over the more spiritual songs on Eno/Cale’s Wrong Way Up.

The two long instrumentals that end Gliss Riffer are either great puzzles or random test questions, depending upon your point of view. “Take It to the Max” starts with almost two minutes of rhythm studies out of Steven Reich, Deacon playing varied sets of rhythms that last four bars each and damn all time signatures to hell. Once you lock in on when they change it’s great fun to dissect. The build is slow and deliberate, bursting wide open at the most logical breaking point in the song. The closing “Steely Blues,” besides being a clever in-joke for you fans of Aja (stick the artist’s name between the two words of that title), divorces the sharp beats of what’s come before it, but not the rhythm. The large electron wave builds with over-modulated bass and random sound envelopes. Deacon treads very carefully with the rhythms inside the sounds, making sure they’re available but not making it easy to get to them.

If all this sounds like more of an enigma machine, well, it is – but it’s a very well looked-after enigma machine. I haven’t been able to chart the path to its heart yet, but maybe that’s because Deacon’s got a different road trip in mind. And compared to electronic works that wear their emotionalism on their sleeves – like, say, Random Access Memories – Gliss Riffer’s being instantly gratifying as an academic exercise somehow feels more honest, in a sense. I’m not sure if it’s better for society or anything like that, but through beats and an incredibly well-attuned attention span, Dan Deacon’s at least compiled a glittering switchboard, and maybe someday we’ll complete the call.