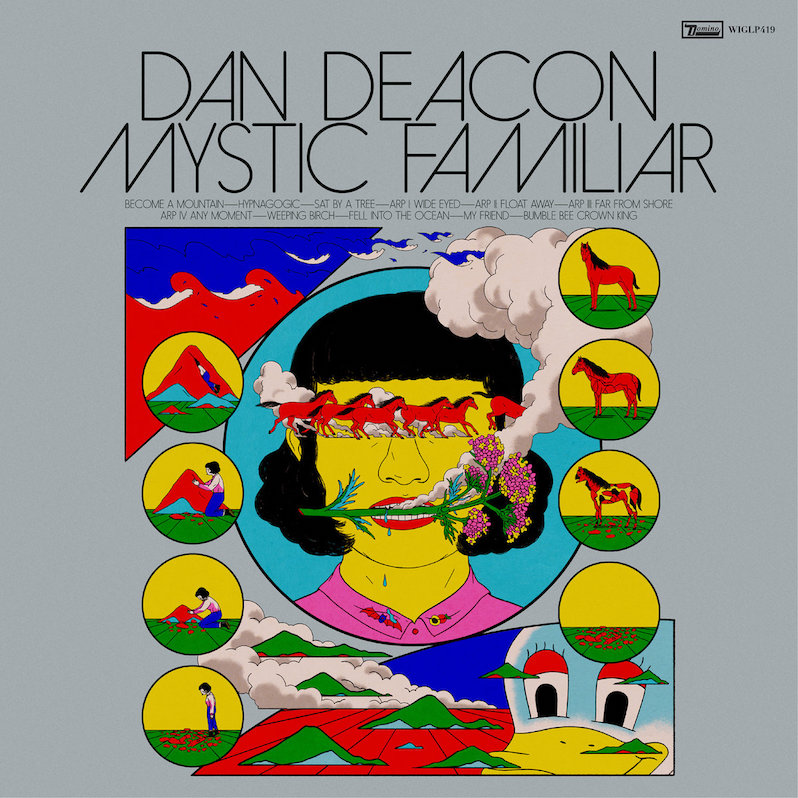 Mystic Familiar begins in austere enough fashion; some post-Glassian piano arpeggios which build into a steady rhythm, the sound of a human voice, and a hushed sense of initiation. If all of Mystic Familiar were entirely like its opening, this would not be a positive review. (Spoiler: It is a positive review.) It isn’t that the opening is bad (it’s not); instead, it’s clearly an initiation, like the start of a magic rite, and so to judge the album based on it is like judging a building from outside the front door. The proper opening, after the introduction, comes with the two-fer of “Hypnagogic” and “Sat By A Tree.” Already, the track titles seem to be charting the path of a meditating sage and mystic tunneling inward, with these tracks measuring that first burst into the dreamtime realms. The music is suitably colorful, bursting with brightness and cartoon forms. It’s imaginative, lively, exuberant, not without cascading emotion and an arc to the inner tensions of the album but remaining always within a sensation that falls somewhere between a rarefied Adventure Time episode and some hyper-elastic pseudo-anime colorfield.

Dan Deacon is especially good at creating these kinds of loose-limbed but tremendously disciplined proggy flourishes of rhythm. It helps that he’s trained in neoclassical music and has scored ballets and chamber music groups before. His mind clearly retains that sense of classical grandeur and formal complexity even when he’s placing a bouncy rhythm and a keen vocal melody. Saying this almost makes it sound like I’m about to say something trite, like he makes the proggy and highbrow accessible, but that’s not quite true. The sonic textures on Mystic Familiar, as with Deacon’s larger body of work, still retain a steep avant-garde edge, drawing as much from noise, punk, and industrial as they do prog, psychedelia and neoclassical music. The difference is, to return to the Adventure Time comparison, one of arrangement rather than bare tools. Deacon always makes sure there is a central rhythm in the midst of the dense polyrhythmic dances of varied pulses, a guide rhythm to act as the center for the others to play off of, and in or against that guide rhythm he often pairs a mirrored lead melody.

You can sit and marvel at the academic discipline of the act, how studious he is in making sure these incredibly dense and acrobatic compositions don’t fall to pieces as they so easily can when they reach this scale. But another of his great tricks, like a masterful magician, is that you often don’t want to stop and marvel at the craft because the exuberant act of song in all of it is just too catching and compelling. The record is arranged deliberately as a song suite, a move pinched again from his time producing art music, but Deacon has clearly spent some hours with the King Crimsons and Yeses of the world, making sure as they did to cram pop melodies and senses of emotional progression even in the midst of what in other hands might appear colder or more clinical. Mystic Familiar feels often like an unfolding tapestry, where each song is determined by the central figure but each piece is a mere quadrant to a greater work, like eyes roving over medieval cartoons. When the kosmiche of the middle portions of the central “Arp” suite kicks in slow and roiling, almost palpably hot with sweat and dance, it feels earned, like the epiphanic moment of bursting Buddhahood flooding over the dissolving corpse of ego. The whole enterprise is alive.

Mystic Familiar sits comfortably as Dan Deacon’s peak release to date. This is momentous in its way; his early releases, from Spiderman of the Rings up to Bromst, felt good but not quite great, budding with promise yet to be achieved, only for America to seemingly burst the doors open. That record set up Dan Deacon to seize at some lingering art electronic/pop/prog hybrid moment that peers like Oneohtrix Point Nothing were also reaching toward. It felt in the early 2010s like the future had arrived. But then with the release of his follow-up Gliss Riffer, it felt like he stepped back away from the plate. It’s not to say the album was bad (it isn’t) but his folding of bolder pop choices, while satisfying on their own, felt somewhere close to a betrayal of the mounding complexity he had established on those earlier works and especially the immediate masterwork predecessor of that album. Of course, held against its peers, Gliss Riffer still maintains greater internal complexity than most other records of its stripe but, not unlike the Animal Collective album Painting With, it didn’t feel like the proper next step for this specific project. Deacon spent the intervening years between that record and this one scoring films, immersing himself in the programmatic and avant-garde worlds again.

Mystic Familiar feels like a fusion of those three threads, taking America‘s sonics as its fundament and applying the sense of pop songcraft in moments and melodies he developed on Gliss Riffer and those more structuralist programmatic tendencies from scores. The visual palette of the cover also expands on one of the unsung achievements of his previous full-length, that of giving Deacon an aesthetic that finally captures the imagistic internalities of his sound. It’s not necessary to have a great encapsulating aesthetic, but everyone from Yes to the Grateful Dead to every incredible heavy metal group in history has one, and the power those key images can wield when married to appropriate sound can’t be understated. The charged sigil is one of the central components of any serious mystic’s magic arsenal, and Deacon finally has his, crafting an image to grace the cover of Mystic Familiar that feels at once to complement and expand upon the sounds on the wax itself. It’s energizing to start the year with a record this strong already in our laps. 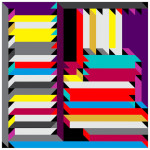