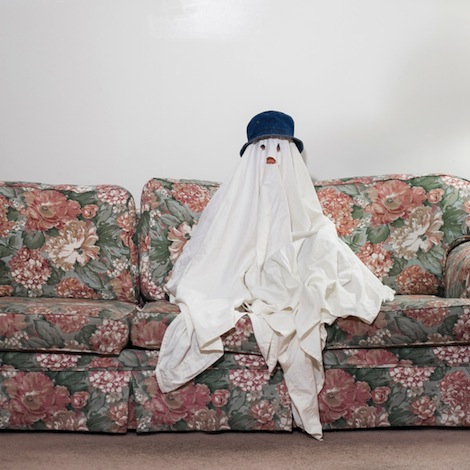 Seattle’s Chastity Belt never seemed like the type to take themselves too seriously. Their debut album, the intentionally misspelled No Regerts, came loaded with spunky fuzz-pop songs titled “Giant Vagina,” “Seattle Party” and “Nip Slip.” And the group earned their party band reputation, thanks in large part to the garage-punk aesthetic that fueled their Seattle parties — unpolished, unfussed, and overflowing with youthful energy. Two years later, the high-school band-geek press photos accompanying the band’s second album, Time To Go Home, suggest that they’re still the fun-loving college-party rockers they’ve always been. Contrast that with the album’s second track, “Trapped,” and a much different picture comes into focus. Over a darkly cool surf-rock jangle, vocalist Julia Shapiro suggests something much more sinister is afoot: “I don’t want to see what’s behind these eyes tonight.”

Time to Go Home, the band’s first for Hardly Art, isn’t necessarily a complete abandonment of the light-hearted tone of their debut, but it’s certainly a bit more serious in some aspects. On the surface, the chorus of “Cool Slut” — “Ladies, it’s OK to be slutty” — echoes a little bit of the freewheeling, cheeky fun of their previous album, but it also takes no extra work to find the sex-positive feminism in the song. Likewise, in the opening track, “Drone,” Shapiro offers a bemused dismissal of a mansplainer: “He was just another man tryin’ to teach me something.” This is the sound of a slightly more grown-up Chastity Belt. It’s not as if they’ve completely shrugged off the hedonism of their past, but they’re ready to admit when it’s not as fun as it’s supposed to be. When Shapiro sings, “I just wanna have a good time” on “Time to Go Home,” it’s not wishful thinking, but the tired lament of someone who’s ready to call it a night.

Still, they certainly make it sound fun on Time to Go Home. The pipeline-riding riffs of “Trapped” lend some hip-shaking mobility to an otherwise unsettling lyric, while the gorgeously dreamy sound of “On the Floor” showcases the prettier side of Chastity Belt’s songwriting. And the two-minute barn-burner “The Thing” is the band at their most punk, cranking up the distortion heartily while they tear through some of their most manic riffs and rhythms. Chastity Belt may indeed be maturing as a band, but that doesn’t mean their music has to sound like it.

Electrelane – No Shouts, No Calls

Stream the new Chastity Belt album, I Used to Spend So Much Time Alone

Chastity Belt announce new album, I Used to Spend So Much Time Alone