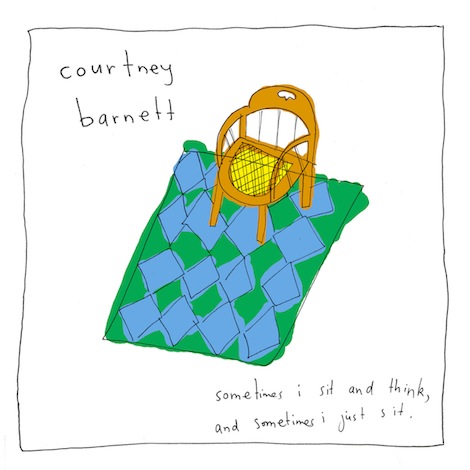 Courtney Barnett doesn’t have many filters. That’s not to say she’s rude, or confrontational, or even profane. And outside of the opening line in 2013’s “Lance Jr.” — “I masturbated to the songs you wrote” — it’s a stretch to say that Barnett crosses the TMI line. It’s more that the Australian artist’s songwriting feels more the product of her own stream of consciousness, arriving in the form of an internal monologue more than as concise portraits of emotions or events. But there’s so much more between the layers of Barnett’s lyrics than the many, up-close details she dwells on might suggest; her signature song, 2013’s “Avant Gardener,” is, on the surface, a fairly epic reading of an asthma attack she experiences while gardening. But amid her descriptions of a yard “full of hard rubbish,” and suspicions that her neighbors “must think we run a meth lab,” there’s something relatable and sad about her tragicomic tale. She may spin one hell of a yarn, but in the end, she’s still overcome with malaise, made worse by the fact that she’s stuck with an inhaler and a hospital bill — and the garden, we can safely presume, is still a mess.

The verbose, freewheeling and sometimes surreal style that Barnett employed on her breakthrough double EP, A Sea of Split Peas, drew comparisons to Bob Dylan, which is a fair — if lofty — parallel to draw. Yet where Dylan’s songwriting was deeply rooted in American folk tradition, Barnett more comfortably fits her humorous and honest observations into the frame of a hook-driven pop song. More accurately, the 11 songs that comprise her full-length debut Sometimes I Sit and Think, and Sometimes I Just Sit are rock songs, more explicitly driven by noisy guitars and big choruses. This isn’t all that surprising, since she’s cited Nirvana and The Modern Lovers as two of her biggest influences, but having the added benefit of a backup band featuring proven badass musicians like Dan Luscombe of Australia’s The Drones lends a bit more grit and noise to Barnett’s taut, cleverly twisted pop tunes.

Barnett certainly had her moments of bombast and bluster on The Double EP: A Sea of Split Peas, particularly the hard rocking “History Eraser” and the Stones-y swagger of “David,” but there’s an added injection of muscle and volume to Sometimes I Sit and Think that makes it feel as if she’s screaming that internal monologue from the rooftops. There’s a lazy groove to “An Illustration of Loneliness (Sleepless in New York)” as she narrates being “awake at three, staring at the ceiling/ It’s a kind of off-white, maybe it’s a cream.” But her tossing and turning, and ruminating on oily residue and dinner plate decor (and realizing maybe she’s a bit peckish) is a build up to a surprising instrumental reward — the catchiest guitar riff on the entire record. And the wrestling match with self-doubt in “Pedestrian At Best” is a rapid-fire series of eye-popping tongue twisters, wherein Barnett queues up her quirks and foibles like “I’m a fake, I’m a phony, I’m awake, I’m alone/ I’m homely, I’m a Scorpio” over a crunchy two-chord garage stomp. The punchline arrives when Barnett leaves her own self-consciousness temporarily to briefly turn her ire outward: “I think you’re a joke, but I don’t find you very funny.”

That so many of the best parts of Sometimes I Sit and Think hit with a heavier impact — if one that’s often lighthearted and fun — offers a marked contrast from her Sea of Split Peas highlights. But they also don’t comprise the whole of it; no moment on the record is more immediately beautiful than the nearly five minutes that make up “Depreston.” It’s a gorgeously dreamy song in the vein of later Velvet Underground, which allows the kind of space necessary for Barnett to narrate a captivating, but defeating home-shopping trip in Melbourne: “I see the handrail in the shower, a collection of those canisters for coffee tea and flour/ And a photo of a young man in a van in Vietnam/ And I can’t think of floorboards anymore.” Yet the breathtaking “Kim’s Caravan” is the one moment where the music itself is ominous enough to match the dark subtext in Barnett’s complex web of lyrics, its closest sonic kin being that of Luscombe’s The Drones. There’s a storm brewing and percolating over its six minute, 47 second span, and its eye is Barnett’s existential reflection. “Don’t ask me what I really mean/ I am just a reflection/ Of what you really wanna see,” she sings. “So take you want from me.”

The slow-burning nature of Courtney Barnett’s early highlights worked so well simply because the music was a perfectly shaped vessel for the long-winded and endlessly entertaining lyrical journey she embarked on. With Sometimes I Sit and Think, there’s not always as much space between each moment of clarity, confusion or self-deprecation, and it comes at a much faster clip. If it overwhelms at first, perhaps that’s just Barnett’s own way of giving us a window into her dizzying thought process. There’s still some distance to go before some of that nervousness and self-doubt melts away; on “Small Poppies” she sings, “I don’t quite know who I am, but oh man, I am trying.” To hear Barnett deliver an album as cohesive and confident as Sometimes I Sit and Think, however, it seems safe to say she’s figured it out.