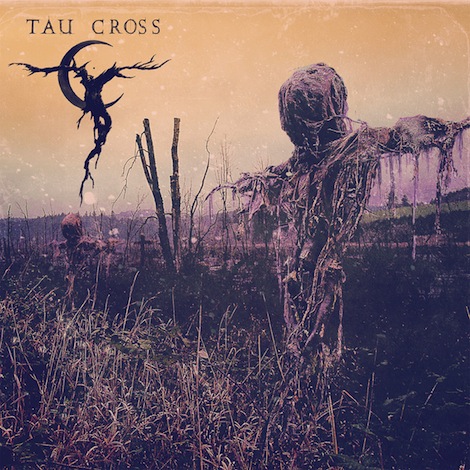 Three-quarters of international metal super team Tau Cross come from a hardcore/crust punk background. Guitarists Jon Misery and Andy Lefton put in work in gnarled Minneapolis crust purveyors Misery and War/Plague, respectively. And the band’s bassist and vocalist Rob “The Baron” Miller is the longtime frontman for UK hardcore pioneers Amebix. Given that kind of personnel—and to a lesser extent, drummer Michel “Away” Langevin of Voivod—it’d be easy to draw an early conclusion about Tau Cross as a supergroup of veteran political punk bruisers, hoisting the flag against fascism, like The Expendables with liberty spikes and a badass batch of riffs.

That’s not terribly far off the mark, at least in terms of Tau Cross’ pedigree and expertise. But the band seems to have little interest in rehashing or even updating the past. It’s there, echoing around in the empty spaces of their music, but it’s but a mere shadow. That’s pretty remarkable, when you consider that, among this foursome of musicians, it takes no effort at all to name a handful of classic records from their early years (see: Amebix’s Arise!, Voivod’s Killing Technology). Even more remarkable is the energy and inspiration behind this new collaborative effort, which is only tangentially tied to crust punk, instead spreading its tentacles far out into the realms of sludge, post-punk, classic heavy metal and straight-up rock ‘n’ roll. Tau Cross may very well hold some reverence toward the classics, it’s just that they’re not always the classics that bear their own credits.

Let’s start with just how catchy this thing is: “Lazarus,” the leadoff track and first song to debut from the album, teases with the ominous, apocalyptic feel of classic Amebix, and its dirty power-chord chug abrades like the best ’80s UK hardcore. And without warning comes a glorious, soaring chorus, turning a menacing pummel of a song into a bona fide anthem: “You shall not bind me with these lies,” Miller sings, “I am alive!” Nearly all of the album’s 12 tracks juxtapose full-throated, stadium-ready melodies with hardcore abrasion, and as a result the album is one of the most eminently listenable—and replayable—hardcore records of the year. Leftist ideals come packaged in blockbuster choruses (“Our Day”) and apocalyptic visions arrive in the form of thunderous post-punk (“Fire in the Sky”). The band even channels the heavy rock ‘n’ roll spirit of Motorhead more than a few times, pulling out their own Ace of Spades with the badass “Stonecracker.”

The most surprising moment on Tau Cross’ debut is the closing track, acoustic ballad “The Devil Knows His Own.” It’s a subdued, albeit heroic folk song, carrying both haunted imagery (“Across the ploughed wet fields, ravens call again“), booming drums and violins. It sounds like it belongs on a Pogues album, or maybe Kate Bush’s Hounds of Love, more so than it does a furious, fists-in-the-air metal record. Yet, by the time it arrives, it’s not even that drastic of a surprise. There’s a striking level of diversity on the album, and that goes for instrumentation as well as stylistic pursuits. And however they switch it up, Tau Cross commits to it, playing it loud, fast and loaded with some excellent hooks. For a band that so often highlights a dark vision of things to come—albeit turned into what’s ultimately a message of hope—Tau Cross sure sound like they’re having a lot of fun.