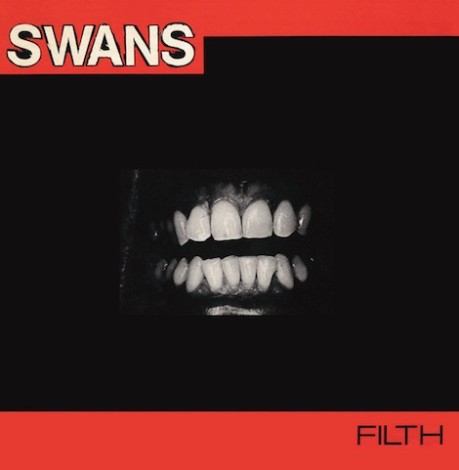 Of all the things that can be said about Swans, not one of them truly applies to the whole of their career. While guided by Michael Gira from their origins in the early ’80s up to the present day, the direction of the band has changed about a half-dozen times, from the no wave of their debut EP, up to the ominous industrial sound of 1987’s Children of God, and from the post-rock experiments of their pre-hiatus epic Soundtracks for the Blind on up to the powerful art rock of recent albums The Seer and To Be Kind. If any consistent qualities apply to the whole, they’re an uncompromising vision and a fierce independence.

For a time, however, Gira’s direction for Swans was that of discordant noise rock and an almost atonal, menacing chug. The sound of their early records, particularly 1983’s too-perfectly titled Filth, had a tendency to grind more than groove, and, as explained in Albert Mudrian’s Choosing Death, inadvertently gave grindcore its name. But Swans and Napalm Death really don’t sound much alike now, other than sharing a reverence for abrasive and anti-commercial sounds, nor did they in the 1980s. Swans moved slower and with a kind of primal urgency. Gira’s lyrics often riffed on track titles, his harsh bellow barking phrases like “Black-OUT!” as if exorcising some vile beast from his lungs. It’s a little bit terrifying, yet weirdly danceable in a way that Swans records rarely are.

Filth, newly reissued and expanded in what’s likely to be an ongoing series of re-releases (which will probably not include 1989’s The Burning World, Gira’s least-loved Swans release), is an interesting document of Swans in their early stages. Very much a product of the New York no wave scene, Filth has more in common with early Sonic Youth and Glenn Branca than it does with contemporary Swans. Guitars scrape and clang, drums sputter and boom, basslines throb and pummel. And Gira stands at the center of it all, wailing as if simultaneously angry and in agony. It’s awesome. It’s horrifying.

But there is a kind of groove to it, underneath all the hostility and harshness. The most outwardly aggressive song of the bunch is “Freak,” perhaps the closest thing to genuine grindcore, with Gira shrieking, “Something for nothing/I want what you got!” And yet, outside of this one brief moment of unbridled abrasion, there’s an almost mutant funk to the band’s jerky ferocity. “Right Wrong” swings like Gang of Four gone feral, and “Thank You” pulses with the classic goth-rock chug of Bauhaus. And “Power for Power” is maybe the most terrifying song you can possibly dance to, as dissonant chords juxtapose against a badass strut and Gira’s misanthropic social commentary: “Use power for power! Use money for cruelty! Use hate for freedom!”

In this reissued package, Filth‘s original nine tracks comprise just one small part of a sprawling and impressive whole, which includes a 24-minute live performance, another live recording of “Raping a Slave,” and the entirety of rarities collection Body to Body Job to Job, which showcases the band in an even more experimental mode, delivering punishing minute-long bursts of harsh clatter in tracks such as “Loop 1” and “Loop 33,” all the while perfecting their gut-wrenching no wave grind on highlights such as “Your Game” and “Mother, My Body Disgusts Me.” If Filth is a curious compromise between accessibility and antagonism, the Body to Body tracks present Swans with the approachability almost entirely removed. Longtime listeners may very well know and love the endurance tests of this early period, but for those working backward through the band’s catalog, they’re likely to take some getting used to at best. At worst, they’re a reminder of what Swans is capable of in their harshest moments.

Listening back to Swans’ incredible 2014 opus To Be Kind, it’s easy to hear traces of Filth in its muscular, beastly funk. Yet over the course of three decades, Gira has more openly embraced ambiance and melody. You’re much more likely to hear pretty music on a Swans album in 2015, albeit under their own strange definition of what “pretty” is. Filth doesn’t require the patience that contemporary Swans does, but rather turns pain and noise into something oddly enjoyable. It’s not catchy, exactly, nor would I call it “innocent”—a songwriter this angry at society has most certainly experienced the corruption and deviance he rails against. But it’s simpler and much more direct, which is what makes it feel vital so long after its release. Filth is pure in its ugliness.