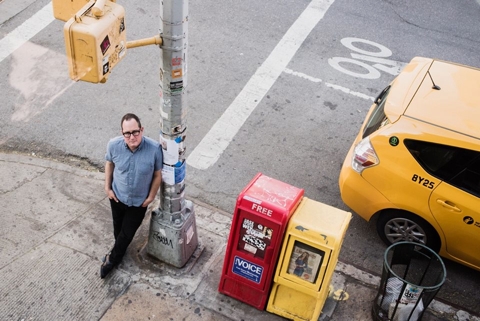 On Sept. 11, The Hold Steady’s Craig Finn will release his sophomore solo album, Faith in the Future, via Partisan. The album follows his 2012 solo debut, Clear Heart Full Eyes, as well as The Hold Steady’s 2014 album Teeth Dreams, and last month, Finn launched a PledgeMusic campaign for pre-orders of the album, featuring a long list of notable, sometimes quirky add-ons, including a variety of different opportunities to hang out with Finn, go record shopping with him, play poker, etc. And today, he’s shared a new song, titled “Maggie I’ve Been Searching for Our Son,” via Wall Street Journal.

“I had both the music and lyrics to these songs, though they changed a great deal in the studio,” Finn says about the album in a press release. “There’s a grandness to The Hold Steady that tends to make me write about bigger, more dramatic themes. Some of these songs are more mundane, with minor slices of life that wouldn’t best be supported by the hugeness of a rock group. It wasn’t always about what we wanted to put in, but what should we leave out? We didn’t want to sermonize or moralize. Just let these songs, and characters, be.”

Listen to “Maggie I’ve Been Searching for Our Son” below.

Craig Finn : Faith in the Future