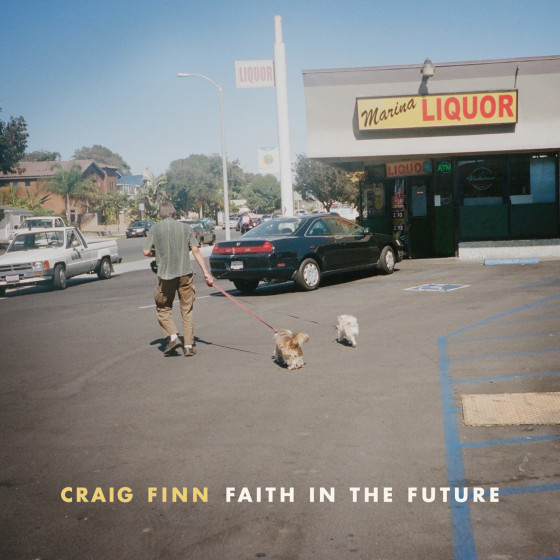 The male characters we meet in Hold Steady frontman Craig Finn’s songs are punk rock romantics and record-shop loiterers, or as he put it in his band’s “Stay Positive,” they are people who earnestly declare that “Youth Of Today and early 7 Seconds taught me some of life’s most valuable lessons.” They are drawn to the abandon that the world of music might offer, but they are also hesitant to fully participate and often their best to be seen as decent fellows. For instance, on  “Hurricane J,” off the Hold Steady’s Heaven Is Whenever, Finn’s lovestruck dude says of a waitress he’s infatuated with, “I’ve seen the kids you’re hanging with and they don’t seem positive.”

Now on the best parts of his released solo effort, Faith in the Future, those guys are a bit older and sadder. They maybe don’t want to shout so much and, on this album, neither does Finn. Where the best of the Hold Steady songs explode at out of the amps, here, Finn is consciously turning the knobs to the left. And where his vocals on the Hold Steady albums are speak-sung jabs and punches, Finn’s singing, as it is, is more prominent.

On the album’s best song, “Going To A Show,” Finn brings us to a familiar Hold Steady spot—a dive bar with a rock band playing, and there’s a woman there that might be the one. Without much of an musical intro, Finn starts in, “Some nights it’s the same old thing/ Some nights it’s the new frontier/ Maybe that’s why we keep coming here.” But once at the old haunt, Finn, does something unexpected singing wonderfully  simple line in the chorus, “I try so hard not not to talk to myself/ It’s hard because I’m always alone.” It’s the most soulful, direct line on the album and makes you think of all the effort lonely people spend to not look lonely.

Later, in “Going To A Show,” Finn sings about how old everybody is looking these days and we find out he can’t bring himself to talk to the woman, he can only eavesdrop as we find out “the bassist in went college with her brother.” The album’s other high point comes at its end with the splendidly titled,  “I Was Doing Fine (Then A Few People Died).” It’s as close to to alt-country as Finn is probably ever going to get, and you can hear the influence of his 2015 tour-mate, Jason Isbell in lyrics such as, “Some nights I keep it a secret/ Some nights I try to get noticed.” Even if not all of the songs land as well those two—here are parts of the album that seem breeze by you almost too inoffensively, as Finn comes across assured with the low-key “Faith in the Future”—growing older with him might be a positive thing.

Jason Isbell – Something More Than Free

Craig Finn of The Hold Steady shares new song, “Maggie I’ve Been Searching for Our Son”