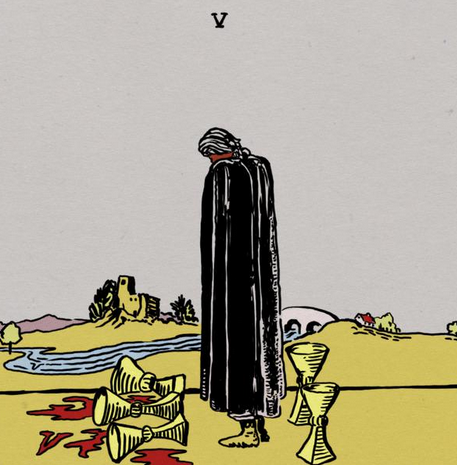 What the fuck even is “maturity,” in a musical sense? Too often it manifests itself among indie artists as taking the safe route in terms of output after an acclaimed release or two, cashing the major-label checks in exchange for a compromised sound, and so on. Or it’s a once-venerated artist or band entering the elder-statesman phase and putting out rote albums as excuses to tour and play the past hits to adoring fans. In any event, as morose and frustrated as Wavves frontman Nathan Williams seems to be about his life on his band’s latest album, V, he certainly doesn’t have to worry about either of those things.

The band’s second major-label release after 2013’s Afraid of Heights, V is a 30-minute blast of California punk that never loses momentum no matter where Williams’ whirlwind emotions take the songs’ narratives. This is no small feat given the thematic focus of the record. Easy comparisons fail me, but V has to be one of the most entertaining (“fun” seems like the wrong word) albums about the depression and confusion of slouching toward adulthood in recent memory. The riffs are some of the harshest fuzz Wavves have ever committed to tape in support of some of the band’s catchiest melodies, neither infringing on the other. Examples include “Heavy Metal Detox,” “Pony,” “Flamezesz” and “Heart Attack,” all shoo-ins for spirited shout-alongs on the band’s latest round of impassioned live shows—if they aren’t being screamed along with already.

Also impressive is Williams interrogating emotions he once simply spewed out as epithets. In the past, a lyric like “I’m not doing anything today, I don’t care what you say,” off V’s “Heavy Metal Detox,” might’ve been the whole point. (And there’s nothing wrong with that. Such sentiments have informed great Wavves tunes like “Idiot” and “Take On The World,” not to mention countless other punk songs). But here, Williams is questioning initial impulses and digging deeper, embodied by the halting, questioning tone of “Detox”’s pre-chorus and refrain: “I can’t decide if I’m getting worse…I’m getting worse…We’re not alone, I believe.” That’s contradictory in the most literal sense, but it’s also an understandable emotional path, and while it may lead to greater uncertainty it’s a clear stab at mature self-examination. And on “Redlead,” he may consider himself “broken and insane” but he’s also not going to stop trying to be better.

Moving on from my apparent side job as Nathan Williams’ therapist, the musical direction of V is intriguing for simultaneously looking back and forward. Wavves haven’t been this relentlessly paced since King of the Beach and Life Sux. There are none of the slow-burn grunge numbers and bleak acoustic dirges that gave Afraid of Heights interesting variances in tempo. But the sound of V unfolds over too short a runtime to overstay its welcome, and possesses a consistent immediacy that Heights sometimes lacked.

I’d be remiss to give Williams all the credit here. Stevie Pope’s bass playing has long grounded Wavves compositions that occasionally seemed like they might fly off the rails otherwise, and since 2013 second guitarist Alex Gates and drummer Brian Hill have been just as important. V showcases this well—Hill’s pounding is particularly important to the album’s furious pace, and the band’s overall sound is richer, more muscular without seeming out of step with past releases.

V is not quite the creative peak that the best moments on Heights—“Demon To Lean On,” “Dog,” “Paranoid,” “Gimme A Knife”—suggested was on its way for Williams & Co. But it is definitely a welcome return to songwriting form and after the relative disappointment of No Life For Me, the Wavves/Cloud Nothings joint album that should’ve been “two great tastes tasting great together” and ended up being “alright…I guess.” And most importantly, it’s a hell of a lot of fun.

No Age – An Object