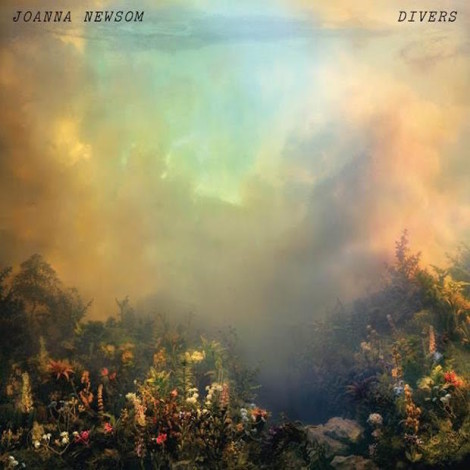 Joanna Newsom’s career has been marked by nothing if not ambition. In the 11 years that have followed her 2004 debut album, The Milk-Eyed Mender, Newsom’s studio efforts have seen her pushing against the strictures of how an album can be built. Her brilliant sophomore record, 2006‘s Ys, spread five labyrinthine songs over the course of 56 minutes; its 2010 follow-up, Have One on Me, was a lush suite of 18 songs split across three LP-length discs. (The perceived excess of that record has its detractors; I am not one of them.)

It’s interesting, then, that Newsom’s latest record, Divers—which follows a five-year gap between albums, the longest in her career—doesn’t flaunt any of the structural ambition that marked her predecessors. Relative to the rest of Newsom’s career, Divers seems downright conventional: 51 minutes and 11 songs, with the longest track clocking in at just over seven minutes. Structurally, it holds pretty close to The Milk-Eyed Mender, an excellent record overshadowed by the grander aspirations of its successors.

Divers isn’t the regression it might appear to be on paper. Sonically, it sees Newsom painting with a slightly broader palette of colors. Synthesizers are scattered throughout the record, from the ambient twinkles on album highlight “Anecdotes” to the dubby bassline that bubbles up through “Same Old Man,” and they fit in perfectly—a welcome surprise, considering Newsom’s usually anachronistic aesthetic. Don’t worry, there are plenty of harpsichords on this album (“Goose Eggs”) and traditional Scottish music even appears to be a touchstone (“Leaving the City,” “Waltz of the 101st Lightborne”). It’s not a substantial departure from her previous work by any means, but Newsom has nestled quite a number of surprises into her familiar sound.

Lyrically, Divers might be Newsom’s most ambitious work to date, tackling unwieldy metaphysical concepts such as ephemerality and identity by grounding them in tightly focused, detailed narratives. There’s a thread of science-fiction continuity woven throughout the album (the 101st Lightborne Elite, a time-traveling squadron of fighter pilots, appear at the beginning, middle, and end of the record), juxtaposed with more grounded, period-piece stories of characters struggling to establish permanence but almost always succumbing to the indifferent passage of time. There are allusions to Percy Bysshe Shelley’s poem “Ozymandias.” Obviously.

Newsom’s not one to wallow in despair, but she’s willing to explore it. “Sapokanikan” leaps wildly through time, providing brief, vivid glimpses of those that history has forgotten, from the thousands buried under New York’s Washington Square Park to the peasant woman whose portrait was painted by Vincent Van Gogh, and then painted over in favor of “Patch of Grass.” It’s such arcana that Newsom delights in; when she mentions former New York City mayor John Purroy Mitchel and the hopeful onlookers watching him “depart for the Western Front/ where work might count,” she knows that those hopes at achieving real meaning are misplaced. Mitchel became an air cadet in California, which would lead to his death less than a year later when he was ejected from a plane that suddenly began to plummet. He’s one of the album’s titular divers, his dramatic political rise and even more dramatic (literal) fall all but forgotten, largely reduced to historical trivia. Others such as the aspirants of “Leaving the City,” the empty nesters of “Goose Eggs” and the bereaved narrator of “Divers” are even less lucky; the failures of their lives are ignoble, doomed to be forgotten.

But Divers is less concerned with fatalism than it is with finding hope and joy within the confines of life’s ephemerality. “A Pin-Light Bent” establishes a sense of peace with the inevitability of death by hinting at something grander behind it all—“the Great Light that shines through a pin-hole”—but the album’s ultimate statement seems to play like an optimistic version of Rust Cohle’s philosophy.

“When cruel death debases/ We believe it erases all the rest that precedes,” Newsom sings on the closing track “Time, As a Symptom.” But she instead suggests that, as the 101st Lightborne Elite appear to be on the verge of discovering as the album ends, time is irrelevant; it “moves both ways.” “The moment of your greatest joy sustains,” she sings. As the song reaches its peak, with Newsom’s voice echoing amidst a swelling orchestra, it’s as life-affirming as a carpe-diem call can be without sounding even remotely trite.

That the album ends with Newsom being cut off mid-syllable might seem abrupt. But as some intrepid listeners have already discovered, it’s another deliberate stylistic choice that only reinforces her point: Don’t despair that it’s over. Flip the record over and play it again.

Joanna Newsom – Have One on Me