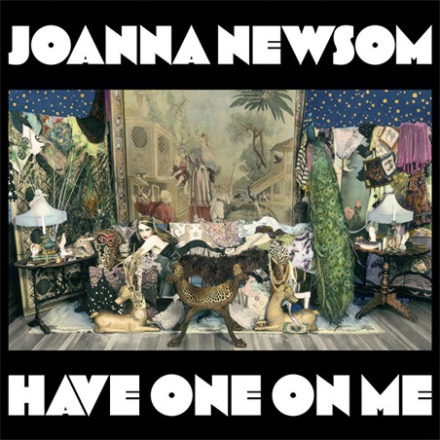 Welcome back to Remake/Remodel, the weekly column in which one of Treble’s editors or contributors takes a classic—if imperfect, to our ears—album, and proposes an alternate tracklist in an effort to provide a different, albeit highly enjoyable listening experience. And with Joanna Newsom’s new album Divers dropping this week, why not take a critical, DIY fix-it look at her last album, the triple-disc Have One On Me?

I’ve never been a Joanna Newsom fanatic. I saw her live back around 2004 or so, when her first album came out, and I couldn’t get past the idea that harp folk is kind of a hard sell. Apparently I was wrong. She’s changed her approach a bit since the release of her debut The Milk-Eyed Mender, and has gotten a lot more ambitious in the process, adding string arrangements by Van Dyke Parks and making some really long songs. And I applaud the efforts, but I also found myself a little caught off guard when Have One On Me was basically at the top of every year-end list in 2010. It’s three discs of harp folk. Granted, she covers a lot of ground therein, and much of it is quite gorgeous, but when only one song—”Good Intentions Paving Company”—adds a full band arrangement amid the fluttery poetic ballads, it’s hard to muster up the patience to take this on in its full-length form. I’ve probably said more than my share of unkind things about the album, mostly around the time when it was released, but if I didn’t see any potential in what it could be, I wouldn’t have said anything at all.

Here’s the thing though: It’s not a bad album. It’s actually a very good album. It’s just way too long. Three discs is excessive, and too little variation between many of the tracks just makes my brain feel fuzzy. But there’s a lot of gems on the album, and if you cut out half the tracks, it goes from being an overstuffed album to one that flows perfectly, and without the strongest tracks losing any of their potency. So I trimmed it from 18 tracks to nine. It all fits on one CD, and on vinyl, it would make for two 30-ish minute LPs. Still a little long, but not two and a half hours. So let’s dive in and see how this Joanna Newsom Have One on Me alternate tracklist becomes Have JUST One on Me.

It might seem counterintuitive for me, right after saying this album is too long, to start it off with a nine-minute song. But you sort of need a subtler, longer song to really let the listener know what they’re in for. This track reminds me more of Joni Mitchell, and it unfolds slowly, opening up with a pretty, meditative sound. It’s a good stage-setter, but one that doesn’t reveal too much too soon.

I almost made this the last song, since it’s the most fun and the one that sounds like a pop song. It’s like the encore! But it seemed more fitting to push it up higher on the tracklist, as if to say, “Hey, this album isn’t all quiet, introspective folk!” This is definitely one of the best songs here, and you sort of need something to capture interest—mine at least—before it gets too ethereal.

Following the catchiest song on the album with the shortest seems like the most logical course of action to me. Knock out the hits before getting to the more long-winded stuff. And this three-minute song is definitely one of the catchiest, so you probably wouldn’t want to bury it too deep.

“Have One On Me” is the longest song here by a few minutes, and while I could trim a lot by excluding it, I do think it’s one of the more successful songs here. Paired with “You and Me, Bess” it’s a strong side B.

If this were a double LP, here’s where Side C would begin, with one of the strongest tracks on the entire album. Here, Joanna Newsom sounds more like Kate Bush than ever, with an elaborate arrangement featuring piano, strings and a rhythm section. It’s the right amount of drama to give the second act some momentum.

Here’s another long one, but I love the build of it, as it grows from a lullaby into a much bigger song. After the bombast of the previous song, it’s good to have something that slows down a bit, but doesn’t entirely descend into soft balladry. There’s even some scratchy guitar at the end, which is a nice touch.

It’s funny—”Go Long” is maybe the most Newsom-y song I’ve included. It’s harp mania! But it’s also goddamn beautiful. I think what makes it work is how intricate it is—and she doesn’t hold back on the musicianship. Weirdly enough, I think she tends to succeed when she goes more ornate and elaborate. And it’s a great penultimate track because it presents a strong juxtaposition to…

… one of the most simple songs on the album. It’s a piano ballad in the tradition of Carole King (and inspired in part by gospel and R&B, and by the end, more Kate Bush—come to think of it, you can pretty much make this into a great Kate Bush album with the right moves), and it’s just a good melody. It doesn’t need much, and the soulfulness of it makes a proper end to a much shorter, but still massive album.