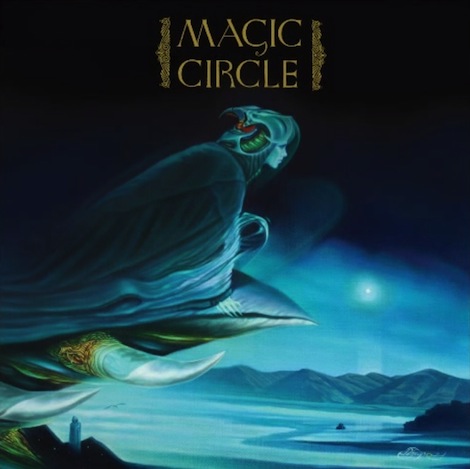 Magic Circle is an easy band to like. That’s not always an easy thing for a doom metal band to be, no matter how far or how ambitious its greatest bands have been in recent years. In fact, doom metal has been ground zero for some phenomenal accomplishments of late, be it the emotionally devastating sludgescapes of Yob’s Clearing the Path to Ascend, or the triumphant progressive dirges of Pallbearer’s Foundations of Burden. But as well as those bands distill complex states of vulnerability or dedication into moments of crushing beauty, there’s still a pretty high bar of entry. You kind of have to really want to be bludgeoned senseless by a 12-minute dirge for the moments of profundity to land, and even then, you need a little breathing room after that kind of soaring high. None of the songs on Magic Circle’s Journey Blind are anywhere near that long, nor are they anywhere near that draining.

They are that good, however. Less indebted to prog than Pallbearer, yet far more attuned to the immediate pleasures of classic rock than a stylistically similar band such as Crypt Sermon, Magic Circle harness a refreshing sort of classicism. Traditional doom is their game, at least by a fairly broad level of measurement, but it’s loosely applied here. The Boston-based band sounds less concerned with upholding the tried-and-true tropes of an outdated norm than they are with rocking the fuck out, and they do more than their share of that throughout these seven tracks. In the eight and a half minutes of the opening title track—the longest here by a good 80 seconds or so—the band mount up and gallop their way through a rugged battlefield with blazing riffs, commanding rhythms and the mesmerizing vocals of ringleader Brendan Radigan. There’s no meditative soul-searching or gently ringing minor chords to be heard on Journey Blind; that would just get in the way of how much fun they seem to be having.

Let’s talk about how much fun this record is for a moment. It’s phenomenally thrilling, even giddily joyful in how Magic Circle translate classic metal aesthetics into towering anthems of melody. Guitarists Chris Corry and Dan Ducas double up on power chord chug on “The Damned Man,” a headbanging groover of a standout that supplies the second half of an opening combo with “Journey Blind” that could knock even the most cynical metalhead flat on his ass. That’s actually a major part of the fun, come to think of it; the abundance of energy surging up within the band’s relentless anthems is overwhelming but infectious. The shortest song on the album, “Lightning Cage,” is equal parts badass rocker, hot-dog instrumental showcase and hesher jam session. It crams a lot into a small space, it comes at you fast, and no, you’re probably not ready for it all.

The listenability factor runs wonderfully high on Journey Blind, though the immaculate construction of their songs isn’t to be overlooked. It’s easy to be won over by the immediate charms of the “Ballroom Blitz”-style riff that opens “Antediluvian,” yet it proves a delicious morsel of bait for an even more captivating chase through slower grooves, soaring choruses and an even stronger permutation of the opening riff. It’s one exclamatory climax after another, each moment raising the bar for where the band could possibly go next. It’s probably to their credit that they end the album there, though starting back from the beginning is at least as good an option, if not a better one. In titling their album Journey Blind, Magic Circle ambiguously let the listener know what to expect here. They’re offering one hell of a free ride, no questions asked. All you have to do is trust that they know where they’re going.

Shadow of the Horns: Metal albums for Halloween