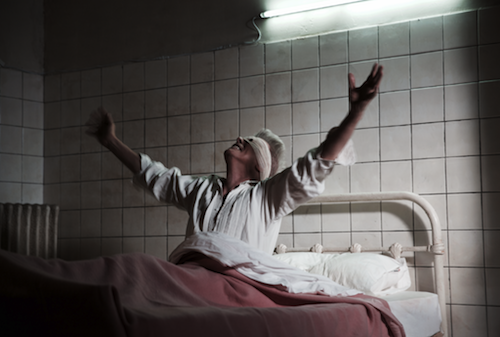 Back in December, David Bowie shared his new single “Lazarus,” from upcoming album ★ (Blackstar), which comes out tomorrow. And today, he’s debuted the song’s trippy video, which follows a similar concept and theme to that of the album’s sprawling, 10-minute title track. This one’s a little shorter, but no less weird or unsettling. In this video, directed by Johan Renck (Breaking Bad), Bowie’s still depicted with gauze and creepy eyeball-like buttons over his eyes, and he appears to be in a bed in an asylum, levitating and undergoing some kind of hallucinatory spell. It’s not as much of a spacey adventure as its predecessor, but more like a low-key supernatural haunting of sorts. Suffice it to say, it’s cool, and another reason to be ready to pick up the album when it drops tomorrow.

Renck released a statement about the video:

One could only dream about collaborating with a mind like that; let alone twice. Intuitive, playful, mysterious and profound… I have no desire to do any more videos knowing the process never ever gets as formidable and fulfilling as this was. I’ve basically touched the sun.

David Bowie’s ★ (Blackstar) is on our list of the most anticipated albums of spring 2016.