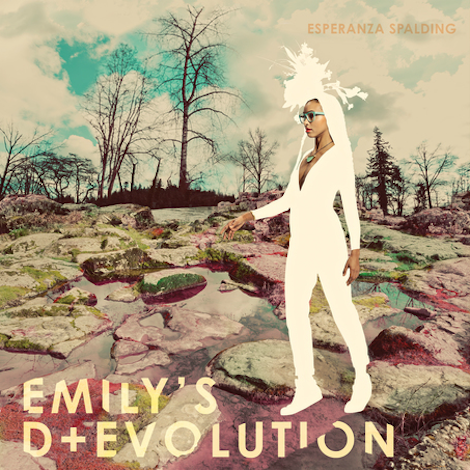 Once you’ve performed in front of the leader of the free world, it’s probably safe to say your artistic path is about as close to limitless as you can get. Esperanza Spalding‘s had the rare pleasure of performing in the White House a handful of times, most recently having given a breezy rendition of the standard “On the Sunny Side of the Street” for a special Celebration of American Creativity concert in October, though she’s been a guest performer in front of President Barack Obama as early as 2009, a couple years before nabbing a Best New Artist Grammy (to the chagrin of Beliebers). That Obama would be a fan of Spalding’s eclectic, soulful and exploratory jazz-pop doesn’t necessarily come as a big surprise; he did pick a deep cut from To Pimp a Butterfly as his favorite song of 2015, after all. But once you reach such a milestone, and more than once at that, your creative path is really only bound by the barriers you impose on it.

With Emily’s D+Evolution, the 31-year-old bassist and singer/songwriter’s fifth album, Spalding is seemingly free of boundaries altogether. Continuing down a path of experimentation already set in motion with 2010’s string-laden Chamber Music Society and its funky successor, 2012’s Radio Music Society, Spalding gives herself fully to a jazz-rock fusion that’s simultaneously more accessible and more psychedelic than any of her previous projects. Featuring fewer covers than past albums, Emily’s D+Evolution finds Spalding running wild with a sort of quasi-fictional character, not unlike previous collaborator Janelle Monáe’s Cindy Mayweather, the idea of which came to her in a dream (that would be Emily, which is incidentally her middle name).  That joyous and colorful muse, a youthful imp of an inner child, takes the reins in redefining and reshaping her musical direction.

Like anything else Spalding touches, Emily’s D+Evolution—which was co-produced by longtime David Bowie producer Tony Visconti—is an astonishing feat of musicianship. It’s almost gleefully weird, as on the opening track “Good Lava,” in which Spalding’s cry of “Watch this pretty girl flow!” unleashes a slithering and fiery funk-rock groove that’s delightfully askew, yet catchy in its atypical progression. It’s a bold, explosive introduction for what ultimately proves to be a diverse set of songs that takes an unexpected number of shifts and turns throughout its 45 minutes, from the funk Joni Mitchell vibes of standout “Judas” to the grungy art-rock daydream of “Earth to Heaven,” and from the vocal acrobatics of “Ebony and Ivy” to the rubbery riffs of “Funk the Fear.” It’s almost too much to absorb in one sitting, but it’s an invigorating listen, if not necessarily one that’s so easy to decipher immediately.

So much of Emily’s D+Evolution is such fun to listen to musically that Spalding’s moments of philosophical truth end up being all the more arresting. The childlike guise of Emily ends up subversively guiding the listener down some profound pathways, musing on love, race, religion and existence with both authority and wonder. It’s not a Trojan Horse so much as a peeling back of inhibitions in the name of finding a greater truth. Her playful approach lends levity to some of the heavier ponderings—”Earth to Heaven” harbors both some of the album’s best hooks and one of its weightiest questions: “what if the heavenly boss turns out to be ruling without order?” Spalding turns that open-endedness about what lies beyond on “Funk the Fear” into a sense or urgency about living in the moment, asking, “Why don’t we seize the day and frost it in our own way?”

For how often Spalding uses the serpentine grooves and complex structures of these psychedelic funk compositions as vessels for some heavy lyrical fodder, there are few moments throughout that aren’t positively beaming with joy and verve. It’s hard not to be won over by the life that Spalding infuses into the album, or outside of it for that matter; when asked in an NPR segment if she was pleased with the outcome, she exclaimed, “Hell yeah, I’m happy with it!” Hers is a funk for thought, a cerebral celebration of sound that’s always seemingly reaching just a little bit higher with each track, always in pursuit of curiosity and awe. As she sings on “Elevate or Operate,” “Just keep riding ’til your wonder stops.”