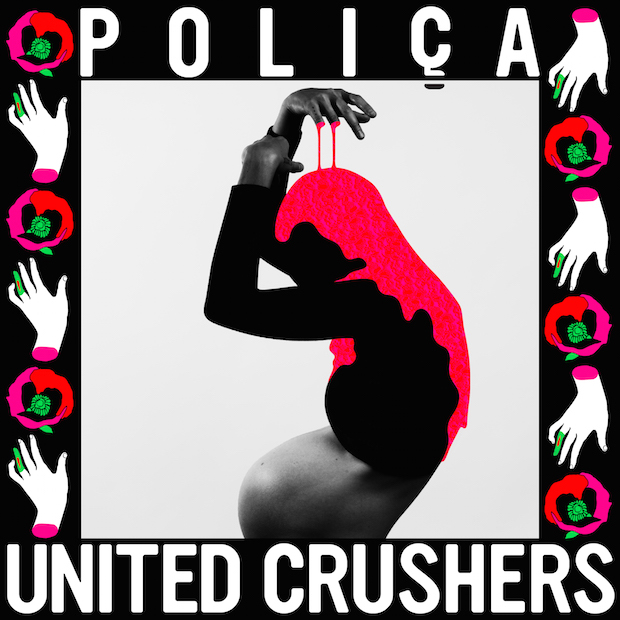 On the highway toward Witch’s Hat in Prospect Park, a slew of cylindrical monoliths tower over passing cars. Effaced along the very top of these looming towers are the words “UNITED CRUSHERS” in bold white letters. These are the graffiti-labeled skeletons of abandoned industry—old grain elevators that wasted away without the common decency of having been put out of their misery. Minneapolis is no stranger to deserted economical prospects—the eerie ruins of agrarian mills still litter the Southeastern landscape of the city. Minneapolis natives Poliça must have taken inspiration from these domineering figures, choosing to name their third album after the spray-painted creed.

The immortalization of something as innately rebellious as street art fits the mood well on United Crushers. Detailing the impetus behind the name, frontwoman Channy Leaneagh said in an interview, “[The idea is] to crush back against things that are oppressing you whether that’s in love, fighting against society’s ills and just trying to make things better.” It should be no surprise then that the criticism of systematic oppression, as well as the political gridlock in Washington, is the subject matter of her lyrics for the first time. Most of the Auto-tune and space-reverb effects are excised in favor of a more natural approach, adding venom to raspy diatribes that include, “It’s all shit, I’ve got mine,” and “Leaders, we have none.” Leaneagh’s voice has never sounded more on point than on the lead single, “Lime Habit”—a slow-simmering synth jam that anchors on subdued tom rolls and muggy atmospherics. Allowing her voice to stand free of manipulation (with the occasional exception) might have been anticipated change, but it is welcome nonetheless. After all, Poliça never seemed to like the kind of band that would pigeonhole their sound with unjustified production gimmicks, however novel.

In fact, many of the production decisions by Ryan Olson are slick and well-manicured, perhaps to a fault. By traversing a far more nuanced and developed avenue, they occasionally lose the unexpected brashness of their debut, and hazy etherealness of 2013’s Shulamith. The tradeoff may be about equal quality-wise, but that leaves them unable to really pull out of the quagmire of being relegated to coffeehouse Internet radio and the fiction section of Barnes & Noble. Whether a band of their caliber actually belongs there is up for argument, but on a cursory listen, they would blend right between Charlift and Coldplay on an adult alternative playlist. That’s unfortunate, because Leaneagh makes a valiant attempt to give Poliça a sharp edge. Her veiled societal commentary and layered, distorted vocals are only able to intermittently break free of the fetters of polite production, particularly during the heated meltdown of “Wedding” and the sullen romantics of “Lose You.”

With that said, United Crushers is still a product of almost immeasurable ambition. The partnership has managed to fine-tune their aesthetic without coming across as stagnant or contrived. Leaneagh and Olson may not be working entirely from the same handbook, perhaps due to the disparate points in their lives; Leaneagh is pregnant as I write this, while Olson remains notoriously private about his affairs. With a distinct, collective vision, and a little less stilted refinement from the band, Poliça could easily write an album as striking as the social injustices they sound off on. Until then, we’ll just have to keep hoping they channel the renegade spirit that is characteristic of graffiti artists like the Minneapolis United Crushers.