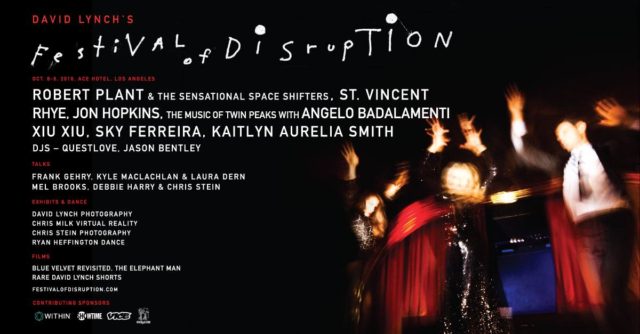 David Lynch has just announced a new music festival, David Lynch’s Festival of Disruption. Taking place October 8 and 9 in Los Angeles at the Ace Hotel and Theatre, the fest is curated by the legendary director. Additionally, all proceeds from the festival are going toward the David Lynch Foundation, which offers treatment for victims of domestic violence, at-risk youth and those who suffer from PTSD. Performers at the festival will include Robert Plant, St. Vincent, Questlove (DJ set), Jon Hopkins, Rhye, and Angelo Badalmenti and Xiu Xiu with Sky Ferreira performing the music of Twin Peaks. The festival also includes talks from Kyle McLachlan (aka Agent Cooper of Twin Peaks), Laura Dern and Blondie’s Chris Stein and Debbie Harry.

Tickets go on sale on June 24. More details are available at the festival website. Watch the trailer below.

Read our feature, Welcome to the Black Lodge: The music of David Lynch.