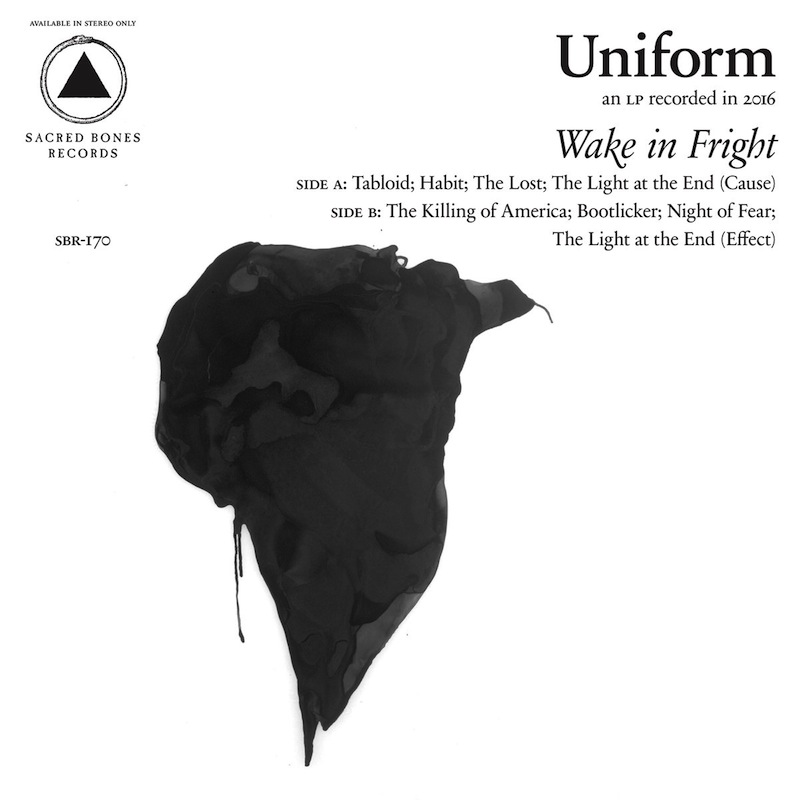 Industrial noise mutants Uniform show no interest in easing the listener into their cacophonous sanctum. The first sounds on “Tabloid,” the first track on their Sacred Bones-released sophomore album Wake In Fright, are: squealing noise-rock guitar feedback, punishing drum machine pummel and Michael Berdan’s throaty, belligerent scream. In that order. There’s no safety in their shrieks and squeals, no padding for their merciless jabs of guitar and piercing high-end screech. Albums this misanthropic and confrontational should probably come with some kind of disclaimer: Listener assumes responsibility for all cuts, scrapes and bruises incurred while listening to Wake In Fright.

It’s not as if Uniform didn’t offer some kind of warning. Their debut album Perfect World and follow-up EP Ghosthouse each came draped in nail-gun beats and flamethrower guitar, neither one the sort of realm where you’d feel comfortable loitering alone after dark or touching anything without a few layers of latex gloves on. Uniform, comprising Berdan (formerly of Drunkdriver) and Ben Greenberg (formerly of The Men), have proven themselves unlikely to go the route of so many dancefloor-oriented industrial and EBM acts, their vile and chaotic hybrid of punk aggression and mechanical coldness nodding back to Big Black’s Roland-driven hardcore (by way of Whitehouse’s sheer aural terror). None of this, however, stands in the way of Wake in Fright being their best batch of songs to date. More than that, it’s their most accessible set of songs, which is even more remarkable given their reputation and tendency to package them in such vitriolic, hostile vessels.

The immediacy of the eight tracks on Wake In Fright doesn’t come at the expense of the band’s penchant for pummeling. These are, after all, some supremely fucked-up times that we’re living in, and fucked-up times call for anthems of unbridled aggression. Uniform’s offer a balance between simple, primally satisfying hooks and crushing ferocity. Leadoff track “Tabloid” never strays far from its mixture of bark, feedback and power chords, but it’s highly effective in building agitated momentum. More explicitly catchy is “The Killing of America,” a commentary on the United States’ inability to separate itself from gun violence set to a Ministry-style machine-metal chug. On “Habit,” the duo incorporates a pulsing bassline reminiscent of Suicide’s “Ghost Rider,” infusing their menacing assault with a much-welcome groove, only slightly diminishing the nightmarish effect of Berdan’s screams, “got a little habit–it’ll never let me go!”

As much as Uniform are a band about pushing limits past any logical or tasteful endpoint, subtlety isn’t entirely absent on Wake In Fright. In fact, it’s one of the band’s secret weapons, used sparingly in an effort to showcase depth beyond the rattling ribcages and pulse-racing throttle. The EBM flutter of “The Lost,” which periodically flirts with major keys, delivers one of the few moments in which Uniform kinda-sorta almost dip their steel-toed boots into mainstream-curious waters. It’s a glorious slice of electronic buzz, while the yin to its yang is side B’s “Night of Fear,” a doom-metal dirge that slows down the band’s reckless ride to hell in an effort to get up close and personal with its horrific scenery. They’re exquisite at rendering terror in energizing, albeit highly memorable tones. In the end, it’s not really Uniform that’s responsible for these horrors—they’re merely providing a perfectly nihilistic soundtrack. 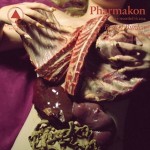