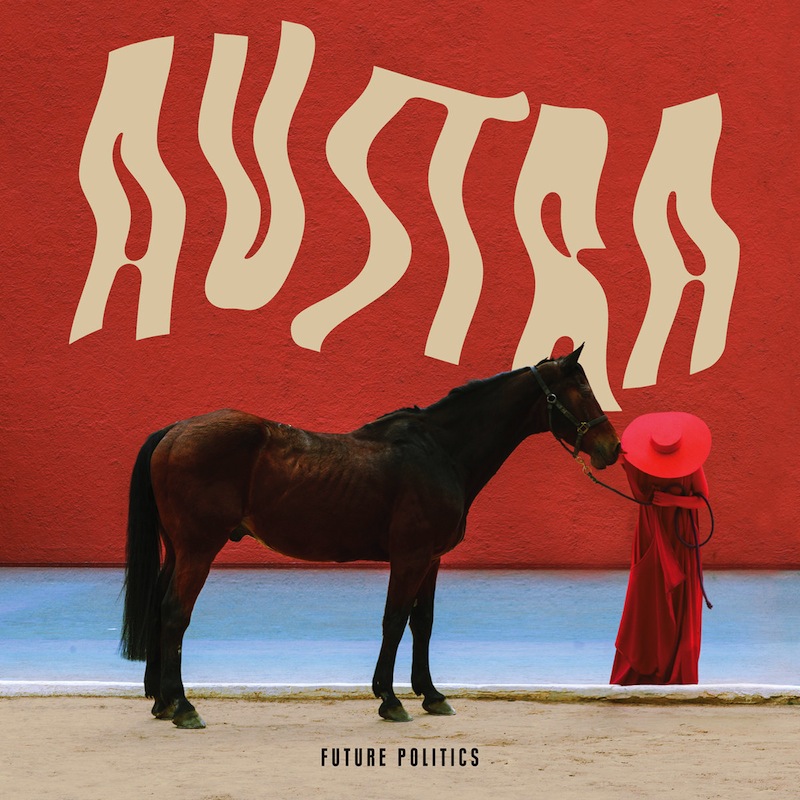 Austra has stood as a powerful force in recent resurgences of darkwave and dream pop, relying on a sensible and clean debut with Feel It Break. They progressed significantly through their next entry, Olympia which furthered the concepts of the band while refining their musical approach. Austra’s third album, Future Politics, presents a fascinating concept of politics as a maturing force—a force that converges toward a truth through a shared visual and aural aesthetic. Perhaps such a concept has never been more ripe for exploration in today’s weary political climate. Future Politics‘ aesthetic does, of course, subvert some of Austra’s prior outings, but in an unexpected way.

Future Politics’ aesthetic is convincing; it’s easy to get lost in. With repeated listenings, it comes across as a dreamy, often sterile, quasi-synthetic landscape that both subverts and reference’s Austra’s signature patent for easy harmonies, big hooks and cleaner-than-clean production. It should be noted that part of this album is very much visual, and in acknowledging so would be prudent to note that its visual structure is in accordance with its aural sensibilities. It’s a perfect pairing, and checking out the music videos is required viewing to really grasping the totality of the work. If you are listening to Future Politics, and choose to ignore the visual material, what’s still present is a menagerie of dreamy pop accordances and structures that thrives on its own.

That is, after all, the reason why we’re here, why you’re reading this. Future Politics, for the most part, is a bold and decidedly energetic album which keeps in tradition from Austra’s prior outings. Katie Stelmanis’ vocal talents are the most immediate and pressing aspect of the album. From the start, Stelmanis’ vocals glide effortlessly along a sea of crisp, warm and sharp tonalities that bristle underneath a tidal wave of bass-heavy harmonies. So the moments of sometimes quiet, sometimes rumbling electronica in between Stelmanis’ vocals are the ones that actually count the most, as they prepare the listener for another operatic vocal burst. It’s impressive and it works incredibly well, most of the time.

Certain tracks, such as “Future Politics” and “Angel in Your Eye,” benefit from influences from not just dream pop but darkwave, naturally, and even possess trace elements of house. Big pops and claps of percussion bristle throughout with a low droning wave or pulsing, gritty rhythms. There are even some quick bursts of effects or patterns that sound beyond dreamy, verging on the psychedelic, which does a great job of diversifying some of the more traditional performances throughout.

The majority of the compositions found on Future Politics are bright and minimal and tend to play around with a core concept for each song. The lyrics for a lot of these songs only help to build their individual identities, some of which are admittedly stronger than others. Darkly inquisitive but sincere (if not simplistic) lyrics like “there must be more to life than this” on “I Am A Monster” embolden the maturity found on this album and help communicate to listeners some of the more engaging and direct material found lyrically on the album.

For all of its hypnotic and dizzying spectacle, Future Politics often loses momentum. It’s at its strongest when it relaxes in its own comfort zones and relies on Stelmanis’ soaring vocals, which although consistent in their pitch and tone provide subtle variances that entreat and smooth out the bass-saturated, often reactive song structures present throughout most of the album. Future Politics is a great reflection on the world we’re entering and in some way have already entered. It’s lofty and inquisitive, although not entirely possessed of lean lyrical depth. It’s full of rousing compositions and brilliant use of dynamic crescendos, built on a foundation of immense vocals contrasted against a serene and ethereal buildup. In some ways it’s an amazing, minimalist dream pop album. In other ways it’s over-extended and perhaps finds Austra at times too afraid to break from a certain aesthetic. However, this is by far Austra’s most complex and enjoyable work to date, a dreamy shot of adrenaline with compelling substance behind it.