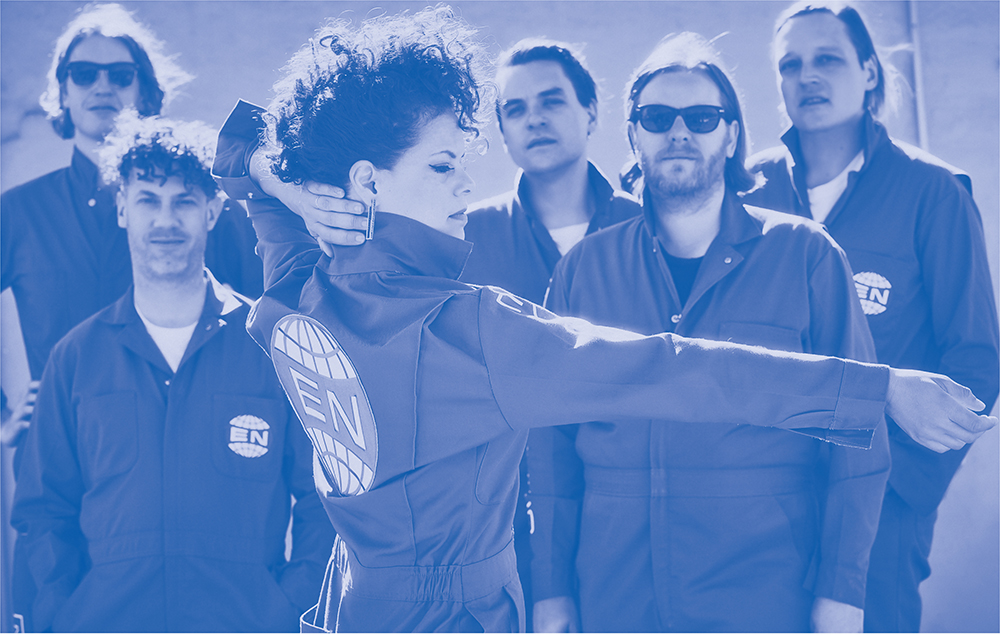 This week’s topic: There’s been a lot of talk lately about the role of music writing when it’s necessary to go negative. Earlier this summer, Spin published a story about how editorial decisions at MTV created conflicts of interest regarding their coverage of VMA performers (specifically Chance the Rapper), and the commercial aspects of a network outweighing those of editorial integrity. It’s a bad look. But it also led us to think about what revered artists get under our skin. So we made a safe space where we can kill someone else’s idols (not that we wouldn’t outside of here, but this is a fun teambuilding exercise): What critical darlings or seemingly universally adored artists do you dislike, loathe or abhor?

Adam Blyweiss: Have Arcade Fire decided yet if they like the suburbs or not? Because they’ve been singing the same song about that internal debate for the last decade and a half. Don’t get me wrong, I dig me some musical doubting and dread built up from your upbringing and surroundings, but really now. Every overstuffed arrangement, every strained Win Butler vocal (yeah, even the soft ones), every relentlessly depressing nebulous lyric, and what you call groundbreaking I call hard to pick out from Modest Mouse or Florence and the Machine depending on the day. And yeah, I just dissed those acts too, I’m the least “indie” indie fan you know, COME AT ME BRO. I wish y’all would just give me “Modern Man” and never speak to me of Arcade Fire’s Canadian cold front again.

Jeff Terich: When Bon Iver first emerged in 2008 with his romanticized debut album For Emma, Forever Ago—complete with its own mythos of being written in a snow-covered cabin in the woods—I understood the appeal of Justin Vernon as an artist. After all, who doesn’t find the humble singer/songwriter, sad and isolated in a forest, appealing. I mean, the fact that the name is actually a misspelled French phrase—bon hiver—seemed a little pretentious, but there’s a lot of dumb names out there. And then I actually listened to the thing. Boy. I didn’t realize a goofy falsetto passed for soulful and sensitive, but OK. Then a few years passed, Vernon spent much of his time showing up on Kanye West albums, and then released a self-titled (sort of; it’s called Bon Iver, Bon Iver? Fuck outta here…) album that essentially sounded like Bruce Hornsby and The Range’s “The Way It Is” with Auto-Tune. I couldn’t imagine anyone, let alone millennials, actually clamoring for robot adult-contemporary, but apparently I was the odd one out. And then last year Vernon releases his most annoying album to date, a poor attempt at a Frank Ocean album, without Ocean’s talent or vocal ability, and with a lot more arbitrary emoji or whatever characters in place of actual song titles. I’ve tried listening to Bon Iver’s music on many occasions and rarely made it through an entire song without rolling my eyes or groaning in frustration. My understanding was that this music was supposedly made by someone with some Real Deep Emotional Feelings, but I don’t get any humanity from it, just gimmicks and indulgent, aimless songwriting with nothing to grasp onto. For someone in Kanye’s network, he learned nothing about Ye’s ability to write a hit song. But then again Vernon never gave Donald Trump a chance, so I’ll at least give him that.

Liam Green: I have never understood what the deal with Tune-yards (don’t even think of asking me to replicate that insufferable affected spelling) was. And while I’m glad M. Garbus seems to have faded into obscurity for now, the fact of her previous existence remains reprehensible as far as I’m concerned. For all we talk about appropriation vs. appreciation—as we should because it’s a real goddamn problem—I never understood how it didn’t affect Tune-yards much, unremarkable mid-fi pop that borrowed liberally from contemporary indigenous African music. Oh wait, I know how; it’s the whole “being a white person in Brooklyn cloaked by performative wokeness” thing. How’d I forget?

Brian Roesler: When Lil Peep tries to cultivate depression and melancholy as an aesthetic, it’s not only offensive, it’s a complete disregard for the actual validity of mental health. Am I saying that he’s exploiting listeners through his style and lyrical silliness? Perhaps. But it’s deeper than that. It’s the manner in which legitimate criticisms are shrugged off and replaced with a shield of glowing irony. This isn’t just something associated with Lil Peep either, in fact it endemic of criticism as a whole. It’s lazy. He’s lazy. The music is lazy. The lyrics are lazy, and there’s a tremendous disregard in evoking the emo genre alongside Lil Peep’s odd and all too purposeful aesthetic. There’s something deeply unsettling and something deeply evocative of excessive privilege and promotion when a young white male raised in the bosom of progressiveness exploits through a carefully crafted example “emotional rap” which it really isn’t. It flirts with depression as both aesthetic and topic and does little to communicate the intensity and viciousness of the subject matter. It’s not that anything dealing with said subject matter should be masterful prose that’s layered and complex, but an artist should stand back and away from their material and say “does this do the subject justice?” And in this case, it does not. Also, it’s annoying, tinny and crass in the worst way possible. It reeks of unoriginality and a tremendous position to exploit privilege. And like the heraldry of emo as a musical genre space, Lil Peep does keep in line with brutal misogyny disguised as “heart on sleeve” style lyrics. It’s a pack of lies nestled in a pack of privilege. It’s a perception of honesty or rather dishonesty that is troubling and a lack of critical attention paid to it is even more disheartening.

Nicole Grotepas: I get it that in some well-recognized and generally accepted way, Jack White is seen as a musical genius and a mad-clever artist. My brain knows that. The parts of me that appreciate critical accolades know that. And the tiny portion of his oeuvre that I actually almost enjoy, tells me that—enough that I get why everyone loves and worships everything he does. And yet…I just don’t love what he does. I respect what he does, on some metaphysical level. I admire what he’s done as an ambassador of sorts on behalf of analog sound, but on the whole, his music makes me bristle and my own ears and heart can only seem to just barely tolerate what he does. When someone tells me they love the White Stripes or the Raconteurs or the Dead Weather, I struggle to not wonder if they’ve fallen victim to a sham. The mad-musical-genius sham. You know the one? Like maybe if he has enough side gigs and is loud enough about how vital analog is and how much better it sounds, no one will have time to notice that only one or two of his songs are actually decent.

Wil Lewellyn: Ghost’s first album Opus Eponymous was decent for what it was. Sure they were blatantly ripping off Mercyful Fate and watering down all the metallic elements with Blue Oyster Cult, but the songs were catchy. The singer was the weak link as he strained to slide up into his falsetto, so compared to King Diamond he was seriously lacking. From there, the albums that followed got progressively worse. Their 2013 album Infestissumam was a horrid disappointment, that reaffirmed any hopes that this was an actual metal band was shattered. The Blue Oyster Cult influence remained intact while the Mercyful Fate elements were shed for multi-tracked chorus-drenched vocals resembling something closer to ABBA.

I can live with them not being metal, but for a rock band to be so devoid of balls while sticking to heavy metal imagery is stomach turning. Justin Bieber’s latest album has more heft to its melodies than what Ghost tried to pass off as an album in 2015 (Meliora). If you sing about worshiping the devil while adorning your presentation in pseudo-horror packaging and I don’t like it, then you probably can’t write songs worth a damn.

Timothy Michalik: My sophomore year of high school, I made friends with a kid who would eventually introduce me to some brilliant bands. Hours upon hours of arguing over what’s the best Radiohead album, whether or not Jay Reatard was incredible because of his music or because he’s another artist that was gone too soon, which was a better era of Bill Callahan—his solo work or his discography with Smog. One day he mentioned something about Björk‘s “masterpiece” Homogenic. Curious, I went home and turned the lights off, expecting my mind to be blown, and after one listen of the album in its entirety, I was left with a blank look on my face. I eventually went on to listen to Vulnicura, and a few of her earlier releases, but again, that same feeling I had originally felt was all that was left to feel. Her arrangements are brilliant, and it’s tough to ignore that, but beyond the music, with her grating vocals and off-kilter delivery, it’s tough for me to actually enjoy her music, let alone ever give it another chance.

Patrick Pilch: I’ve got beef with Tame Impala‘s Currents. I listened to the album. I listened to it again and again (and again and again). I’ve had borderline physical altercations with my Currents-loving roommate about this album. I want to like it, but I simply cannot. Don’t get me wrong, Innerspeaker is incredibly consistent and Lonerism continues to hold up as a retro-rock classic despite its potentially-tiring commercial oversaturation. And while it’s true each record pays tribute by realizing some of today’s hits with yesteryear’s psych-rock breakthroughs, Currents just sounds entirely lazy. “Let It Happen” is faux-Daft Punk trash, with an utterly nauseating and boring solo synth note finale. It’s annoying as hell, actually. The first time I listened to “Let it Happen,” I pictured a cultish dystopian society, with each citizen decked out in grey government-issued jumpsuits and a screen attached to their face, monotonously dancing in a state of half-consciousness as their overlords closely monitored their behavior and vitals. “Nangs” is a notoriously one-dimensional, original-to-the-sequel type track (the sequel being “Gossip”), contagious like a yawn in a room filled with stale air conditioning. “Past Life” is dry as hell and deeply disappointing. I find it absolutely baffling as to why it’s later reprised on the album’s closer, “New Person, Same Old Mistakes” or even covered by Rihanna on ANTI. Tracks such as “Yes, I’m Changing,” “Eventually,” “Cause I’m A Man” and “Love/Paranoia” trudge at glacial pace and, while they may have their own respective hooks, they tend to get lost within their own home on Currents. Also, since we’re in 2015, Art Angels sucks too. Thank you for your time, I needed to get this off my chest.