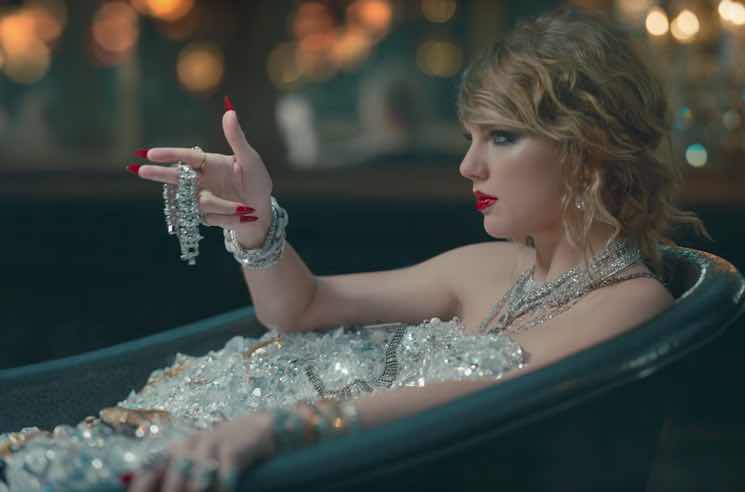 My friend Pete, who is not usually the biggest fan of many artists discussed in this space and loved by me, or the closest follower of the zeitgeist, nonetheless dropped an excellent pearl of critical analysis regarding Taylor Swift at the bar about a week ago:

Millions of analytical words have been written about the golden-haired Pennsylvanian country-pop turned straight-up-pop songstress, some of them excellent, some insipid. But Pete’s comment, spoken after a brief discussion about the wretched awfulness of “Look What You Made Me Do,” seemed so apt for Swift’s current predicament—because she has no idea who or what the fuck she wants to be.

For most twentysomething people, including pop cultural stars, there’s absolutely nothing wrong with that, and Taylor’s no exception. She’s likely as angsty and confused as everyone else in that age bracket. I certainly was. But being a pop star requires either operating within a persona or possessing the ability to evolve with relative seamlessness. Swift, whose albums became continually more divorced from country sonics, fit more or less into the latter group—until now.

I work day to day in online advertising on the creative side, so I can’t say I’m particularly bothered by pop music’s deployment of image and branding. The genre is simply more open about this truism than others. But when the image creation fails and the music is bad, you’re left staring at an inexplicable mess, which is what the rollout of Swift’s forthcoming sixth studio album, Reputation, looks like. The cover art is kind of cool. The music…is not.

The aforementioned “Look What…” floats above 808s or 808-soundalikes that sound as if programmed by a (white) person who’s never heard actual 808s used properly, and relies on weird talk-singing and stilted attempts at a sultry voice on the one-line chorus. “Ready For It” is actually quite interesting from a production standpoint and has a soaring hook (she’s still good at those when she puts in the effort), but Swift has no business being on it because it just doesn’t mesh, and…sweet Christ…is she rapping on the verses??? Is…she…doing a Rihanna impersonation like Cameron Diaz supposedly did in The Counselor? Is it supposed to be intentionally awkward in some elaborate subtweet of the equally bad/awkward semi-rapping on Katy Perry’s “Swish Swish?”

(OK so it’s not the third thing. She just tried a vocal gambit and failed. But seriously, Katy if you listening, Tay if you listening: Go to a yoga class, get Panera, share a session at Equinox, get Sunday-funday Mimosa brunch, whatever it is transparent-level-caucasity white women do together, and hash this dumbass beef out, because it is sooooooooooo boooorrrrinnggggg and the music it’s produced is bad.)

Let me be clear: I like a lot of Swift’s music, singles and deep cuts alike. Speak Now and RED are strong country/power-pop albums, and despite 1989’s flaws it has “Style” on it, which is an all time great pop song. But if all of Reputation is like this, yeesh. What in Christ’s name is she so mad about, anyway? She’s taken seriously as a songwriter and performer, and more often than not makes music appealing to a fairly broad audience. Is she mad about being called out for epidermis-deep feminism? Welp. Remaining mum about the rise of a president who bragged about grabbing pussy sans consent? Uhhhhhh.

I don’t need to hyperlink these things because they’re well documented. Flex your Google muscles. If she’s angry about accurate criticism, she’s as massively out of touch as a certain almost-president currently appears to be. Swift only comes off as disingenuous in this guise, and it’s immensely off-putting. (Also, once again: The music is bad, and that’s what ultimately matters most.)

Miley Cyrus knows a thing or two about criticism. She’s received plenty, legitimate and otherwise. The rollout, promotion and touring surrounding Bangerz were an over-the-top candy-coated mess, but there were also a fair number of solid pop songs in there and a handful of great ones. She looked a bit ridiculous at times, though—not because she was relying heavily on sex appeal, but because she was doing it So Performatively Like Someone Might Not Notice. It gets tiring when any musician does something like that of any variety, to me at least. Cases in point: Liz Phair on that execrable self-titled album, T.I. during that inexplicable T.I. vs. TIP period, Marilyn Manson for the past 20 fucking years, the early work of Tyler the Creator…you get the point.

I bring up Cyrus because, as a reasonably close follower of the pop music universe’s temperature, there’s been little discussion about the two singles from her soon-to-arrive album Younger Now. Both are excellent, though the title track is the keeper, a California pop masterpiece drenched in reverb, blessed with a bittersweet chorus that has to be the first thing ever to make me think of 4 Non Blondes in a good way.

The hooks on these promo singles from Younger Now are too big to not be recognized as pop songs. Cyrus isn’t trying to be difficult; she already did that with the brainfuck Dead Petz album and, being far from stupid, realized it didn’t work or became disinterested in capital-A Artsiness. But the emotional undercurrents carry a weight you might not expect, and Cyrus’ voice has emerged as the thing of powerful beauty it always bore the potential to be. The songs haven’t caught much notice, at least not yet, though I think that might change.

I’m not averse to the proper deployment of bells and whistles in pop music, the promotional machine, all that shit. But it’s intriguing that Taylor Swift and Miley Cyrus effectively switched roles in this manner, with one adopting performative adornments and the other eschewing them. Cyrus did it seamlessly, without appearing to change who she is (e.g., the Younger Now singles sound like the work of someone who smokes amazing Cali weed, as Cyrus does often, with zero shame), and Swift floundered. Heart and earnestness, perhaps more than anything, fuel great pop music in all its iterations. Swift’s is all but invisible in the strange costumes with which she’s bedecked herself, while Cyrus’ burns bright.