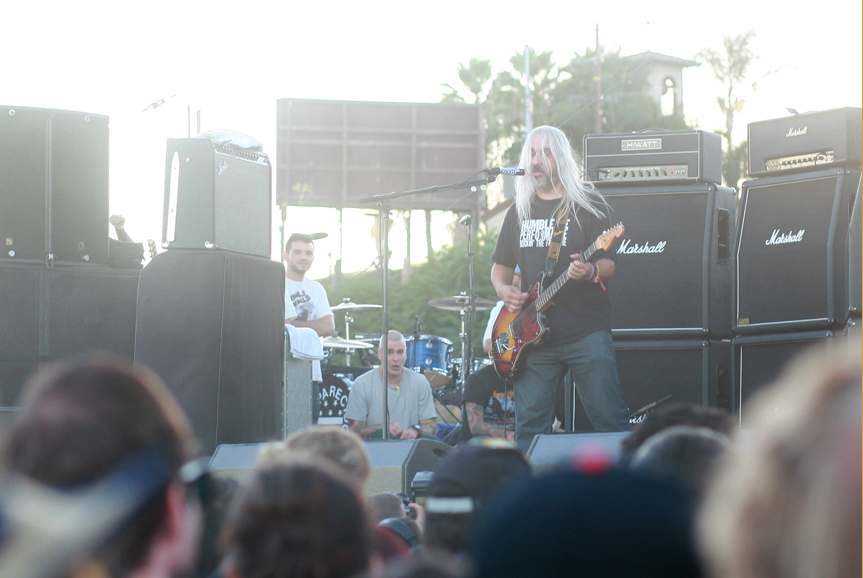 There’s long been a persistent myth that indie rock (the offspring of punk rock) was a place where instrumental proficiency wasn’t necessary. And that’s maybe technically true, but indie rock and shredding aren’t mutually exclusive. In fact, just a surface level reading of some of the biggest indie rock bands of the past 30 years would suggest that some badass guitar playing can do a lot to set a band apart. More recently, groups like Diarrhea Planet have been showing off just how far you can go with a band full of virtuosos, but they’re mere descendants of a long line of guitar heroes in indie rock. Take a trip through pentatonic scales and feedback squalls with us as we share a list of essential indie rock guitar solos.

A song so nice they had to record it twice, Mudhoney’s “You Got It” (subtitled “Keep it Outta My Face” on its first release) is the quintessential grunge song. It’s dirty, it’s rude, it’s messy. And it contains two of the most indispensable guitar licks in indie-rock history. The intro itself is repetitive, but carries the rhythm through to the beginning of the song. But it’s Steve Turner’s solos between the verses that sold many a Superfuzz and Bigmuff pedal, with its raw but pure overdrive. The background chords are generic enough that a less restrained musician would have gone overboard, but Turner kept it simple and sparse while sounding neither. – CG

With a string-bender like J. Mascis at the helm, who seems to give off more energy standing still than your everyday plasma ball, I bet someone could argue that every Dinosaur Jr. song has the best solo in indie rock. Instead of spending time pursuing that theory, let’s focus on one of the band’s biggest blips on mainstream radar. Threatening to become solos on their own, Mascis’ layered guitar parts through this song’s central mantras and choruses make it sound far happier than the lyrics suggest. At around the 3:25 mark the final overdubs propel “Feel the Pain” to its cold stop, a quick series of bright riffs and runs leaving Mascis’ vocal warbles behind like skybound fireworks. – AB

from For Your Own Special Sweetheart (1994; Atlantic)

When I think about bands known for their solos, Jawbox isn’t necessarily the first that springs to mind. Not that they never added solos, but they rarely involved conventional scales and often took up limited space in the song. “Savory” is a prime example of J. Robbins’ art of the solo: a scraping, abrasive jangle of an instrumental spotlight. It’s noisy, yet melodic, spacious yet impactful. Furthermore, it’s essentially a repetition of a few key riffs, whose presence—unburdened by vocals—have an emotional power that’s quite breathtaking. Because ultimately, that’s what it’s about—capturing a feeling. – JT

Indie rock guitar gods aren’t uncommon, but most of them are following a particular ideal. Usually it’s J Mascis. Sometimes it’s Thurston Moore. But more often than not, that idolatry is of the one and only Doug Martsch of Built to Spill. Given his performances on albums like Perfect From Now On, it’s easy to see why. “Velvet Waltz,” one of the album’s shining moments of glory, climaxes with a solo that showcases not just his knack for melody and beauty, but a rare intensity that seemingly turns the song upside-down. About two-thirds of the way through the song, it turns into something sprawling and majestic, Martsch’s guitar performance less like a humble indie guitarist and something more like Mick Ronson in “Moonage Daydream” or Eddie Hazel in “Maggot Brain.” It’s truly breathtaking. – JT

“Sugarcube,” a standout single from what’s perhaps the best album Yo La Tengo ever released (though there’s room for reasoned debate), is essentially half solo. There’s a short, melodic solo with a fair amount of skronk after the first verse, and a second solo that’s much more noisy and chaotic, which acts as a kind of counterpoint to the catchy, tuneful song beneath. And damn, is this song catchy. (Plus there’s some overdubbed fretwork that closes out the track beneath the final chorus.) But that’s just part of the appeal of Yo La Tengo: You get the fuzzy pop melodies, but they’re more likely than not to come packaged with some trademark Ira Kaplan freakouts. That’s why we love ’em. – JT

Elliott Smith’s legacy has largely concerned his abilities as a songwriter, and there’s no doubt that his songs are consistently chill-inducing. But he also was a serious badass when it came to his strengths as a musician. He could play the hell out of whatever instrument you put in front of him, and that certainly includes guitar. On “Son of Sam,” one of the few singles in his catalog in which Smith let his rock ‘n’ roll side run free, he keeps it concise, but he makes it count. The solo in “Son of Sam” is short, and works all the better as a result of the honky-tonk piano backing (and if I’m being honest, kinda starts at the bridge when Smith’s chords climb up the neck), but it’s 10 perfect seconds of fuzzbox brilliance. – JT

“Cause=Time,” one of the singles released from Broken Social Scene’s breakout You Forgot It In People, is deceptively sedate from the outset. It’s a dreamy indie pop jam that eases into a comfortable groove in its first verse, but it hints at something more dramatic when Kevin Drew delivers his chorus vocal. After a couple verses, however, guitarist Andrew Whiteman is given his moment to shine, delivering a stunning, even elegant solo that brings more than a little fire to the gradually intensifying, layered track. And then around the 3:45 mark, he does it again, but longer, louder and with even more intensity. Badass. – JT

Sleater-Kinney – “What’s Mine Is Yours”

Sleater-Kinney’s The Woods was the moment when the Portland trio fully embraced their guitar heroism, to a pretty dramatic degree. It featured their first song to extend beyond 10 minutes, not to mention lots of badass riffs throughout. But “What’s Mine Is Yours” stands out because it descends into a solo that’s a true solo in every sense. Janet Weiss and Corin Tucker drop out briefly to allow Carrie Brownstein to step into the spotlight and make some righteous noise. Of all the solos featured here, it’s one of the most abrasive, it’s screeching feedback tones and layers of fuzz something like Sonic Youth via Tony Iommi, and it’s one of the coolest moments in their entire catalog. – JT

One disappointment about St. Vincent’s otherwise strong MASSEDUCTION from last year was its seeming absence of wild, heroic guitar moments. When you listen to Annie Clark, you expect to hear some outrageous guitar playing, and much of 2011’s Strange Mercy is occupied by some of her greatest—you can practically picture smoke billowing off of the neck. “Surgeon” is, initially, one of the more subdued tracks on the album, but the nimble fretwork is plain to see in the chorus, performed not only fast as hell but with an elegance that’s even harder to pull off. But in its outro, Clark plugs into some trippy synth effects and goes full Prince, climaxing with a soaring high note that vibes out into oblivion. And while her affinity for outlandish effects makes it sound like something other than guitar, her live performances make clear that she’s the one bending the strings. – JT

from The Most Lamentable Tragedy (2015; Merge)

There have been a lot of members of Titus Andronicus over the years, with frontman Patrick Stickles being the sole constant since the group formed in New Jersey in 2005. But one other constant is the steady stream of shredders that have been a part of the band since the beginning. “Fatal Flaw” showcases two of those six-string badasses at work during its brief but awesome harmonized solo after the rock anthem’s first verse. It’s as Thin Lizzy as the band’s ever sounded, which is saying quite a bit, since they already had more than a little “Jailbreak” in their blood from the get-go. – JT