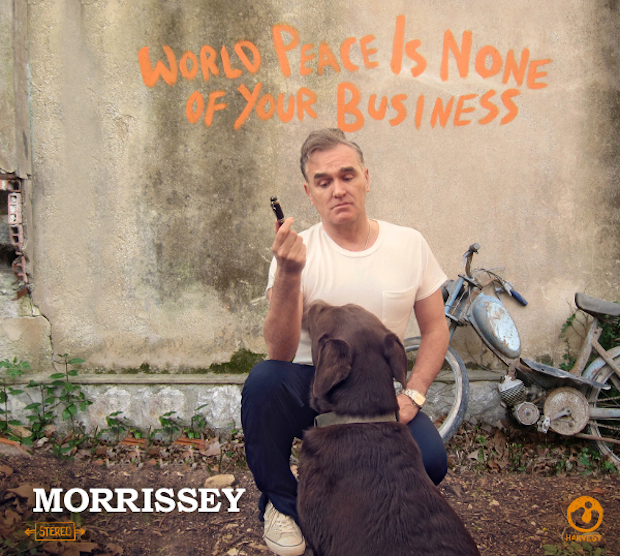 I’ve always supposed, in my jittery, inconsistent relationship with Morrissey’s music, that he’s not much about catharsis. He’s made a lot of records many people my age and younger have used for just that end, but I never got those survivor’s kumbaya glints about the man himself, and I kind of appreciated that. His dim view of humanity never compromised, his own longings both given into and denied frequently within the same song, it always seemed he was one faded smile away from a statement of perfect despair and sardonicism.

Merry Christmas, bastards, and careful what you speculate on. World Peace Is None Of Your Business is an opprobrious, discomposing work that plays off Morrissey’s historic pop sweetness to really screw with us. Anyone getting catharsis from the album is probably allergic to some household object they can’t identify. But the album splits itself. On one hand it’s compelling and daring music – this may be his best-made album from a production standpoint, ever – but his arguments sound too cut-and-dried, and even the ones you might agree with in an abstract way shame you away from asking follow-up questions. It’s an edict. Popcorn optional.

“Would you kindly keep your nose out,” Morrissey sarcastically sings in the faux-50’s-pop title track, “the rich must profit and get richer/And the poor must stay poor/Oh, you poor little fool.” Fair enough, if a little easy. But then: “Each time you vote, you support the process/Brazil and Bahrain, Egypt, Ukraine.” Having negated capitalism and electoral course and not even hinting about an alternative solution, you leave the song thinking, “Wait – Morrissey isn’t in character here – he really does think I’m a fool!” There’s the distinct sense that while he superficially takes the side of the oppressed, he doesn’t think much of them personally, or really wants to get his hands dirty to help them out.

“I’m Not A Man” suffers from another kind of philosophical detachment. The nearly eight-minute centerpiece offers a litany of male epitomes in listicle format: “Don Juan, picaresque wife-beater vest… Wheeler-dealer, mover-shaker… Wise-ass, smart-ass, workaholic.” You know where this is headed, but for the sake of completion: “If this is what it takes to describe/I’m not a man.” Maybe it’s because I live in a blue state, but Morrissey’s examples strike me as outdated archetypes, and the disconnect makes the whole song out of touch. When that’s ensconced in an eight-minute piece with a minute-plus experimental intro, that’s just bad clock management.

Other readings from the Writ of Moz stumble from either lack of depth or confusing motives. “The Bullfighter Dies” is a quick salad of Spanish puns (“Mad in Madrid/Ill in Seville”) conjoined with a celebration of the titular event, “because we all want the bull to survive.” Song over. “Kick The Bride Down the Aisle” redresses the sham of romance and marriage, but from a weirdly misogynistic point of view: “She just wants a slave/To break his back in pursuit of a living wage/So she can laze and graze… That cow in the field/It knows more than your bride knows now.” You think Robin Thicke would get away with that?

When Morrissey either displays or simulates empathy World Peace breaks through, but in a devastating, numbing way. “Smiler With Knife” is a depleting, grotesque portrait of a profoundly broken soul giving into his rape and murder: “Surrendered will, I am before you/I am sick to death of life.” Morrissey’s closing reassurance to his own assailant is as incredible a moment as he’s ever devised: “Smiler trust me when I say/You’ll be O.K.” Played out with stop-start, hesitant drums and genteel flamenco guitar, it’s a horrifying, unshakeable lullaby.

In between are absorbing pieces that make the most of Morrissey’s expanded production palette, even as some raise more questions than they answer. The portrait of a guardian seeking his ill-fated son in “Istanbul” crashes against foreign elements that jar his pursuit, in relentless Britpop grandeur. The graphic resolution of “Staircase At the University” depicts a put-upon woman, driven to extremes by male expectations of her educational pursuits. “Earth Is the Loneliest Planet” takes a hyper-active South American fusion drive to an expected motif: “Humans are not really very humane,” Morrissey sings, apparently without self-aware irony.

Morrissey has neither the hide nor patience for negotiation; in its place are snappish broadsides so simple-minded people far less intelligent than Morrissey could whip them up, alongside a smaller number of real insights. It’s not so much that I expect Morrissey to have solutions to the problem of the industrial-military-meat-and-sports complex and those sensile, elevated sprites who must exist within the same, but I didn’t expect him to be so easy-going about giving up. Maybe I should have.

Morrissey – Ringleader of the Tormentors

Morrissey – You Are the Quarry