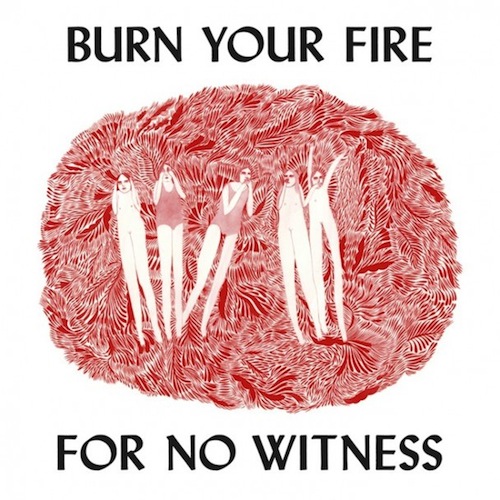 All anyone ever needed to break someone’s heart was an acoustic guitar and an honest, unguarded voice. Oh, sure, that sounds corny, but if the image of a lone, lonely-hearted troubadour brings to mind bad coffeehouse covers sets then maybe it’s worth a refresher course through the catalogs of Nick Drake, Johnny Cash, Joni Mitchell or Elliott Smith—or more recently, Angel Olsen. The bulk of her debut album Half Way Home found the Chicago singer/songwriter relying on little more than her own six-string fascist killer and a set of pipes that could make the most steeliest and stoic of listeners crumble under the emotional weight. Listening to Angel Olsen could very well make you feel something.

Olsen’s second album and first for Jagjaguwar, Burn Your Fire For No Witness, essentially makes that possibility into a certainty, only the second time around, she’s got an even deeper arsenal of tools at her disposal. In one of the album’s most straightforward and best tracks, “Forgiven/Forgotten,” Olsen transitions from being a lone voice on the stage to the leader of a noisy, distorted rock band. And it suits her nicely; when her just-slightly distorted voice lets out a cry of “I don’t know anything… but I love you!” over a nicely fuzzed-up backing, the emotion in her vocals isn’t diluted or drowned out—it’s made bolder and more commanding.

It takes a couple minutes for Olsen to build up to that intensity. In the hushed, spare opener “Unfucktheworld,” a bare spotlight shines on the singer as she runs through the post-mortem of a relationship: “I quit my dreaming the moment that I found you/ I started dancing just to be around you/ here’s to thinking that it all meant so much more…” It’s a fleeting moment of naked vulnerability before she flicks on the amp, steps on the pedal and enters the most satisfying step in the grieving process: making some cathartic noise. On the dusty, Crazy Horse-inspired rock of “Hi-Five,” Olsen kicks off with a Hank Williams nod (“I feel so lonesome I could cry”), and caps one her most raw, viscerally rewarding tracks with a shout-out to all the other lonesome souls: “Are you lonely too?/ Hi-Five!/ So am I!” She turns confrontational on the infectiously jangly “Stars” (“I think you like to see me lose my mind/ You treat me like a child/ I’m angry, blind”) and coolly, but cuttingly delivers a tongue-twisting reflection on a crumbling relationship in the mesmerizing “High and Wild”: “You’re gone, you’re gone, you’re with me but you’re gone/ A feeling once so strong is now an old forgotten song you don’t sing so high and wide.”

As invigorating and, awesome as it is to hear Olsen turn up and rock out on Burn Your Fire, its most breathtaking moment is also one of its most hushed. “White Fire,” the longest track on the album at just under seven minutes, is a haunting dirge in the style of Leonard Cohen’s darkest material, with Olsen backed by nothing more than her sparsely plucked waltz and the specter of reverb. “Everything is tragic,” she sings as the song begins. “It all just falls apart.” Where the songs that precede it find her bolstered by the sounds of a rock band tearing through a set of barn burners, here she steps back into the light of that bare bulb, offering obliquely poetic wisdom with ghostly restraint: “If you’ve still got some light in you, go before it’s gone.”

It’s easy to be blown away on first listen by all the bright and shining new buzzing things on Burn Your Fire For No Witness, and with good reason — Angel Olsen pretty much nails every loud, distorted rock song she lines up here. And yet, with songs like “White Fire” and the gospel-inflected closer “Windows,” Olsen proves that her own emotionally resonant voice is still the most powerful tool in her quiver. She can still devastate with nothing more than a few chords and a chorus, but that’s really just the beginning.