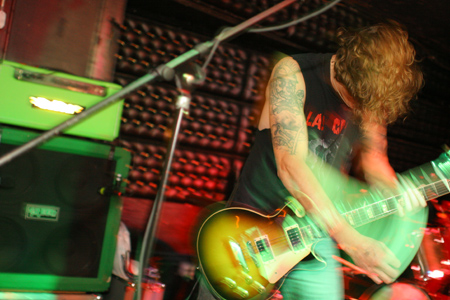 Baroness is a band whose sound seems capable of not just filling stadiums, but eating entire cities. They’re more than a band, they’re practically a force of nature. And at their most recent show at the Casbah in San Diego, their intense, melodic metal assault practically plowed through the 200 or so eager fans in attendance.

And yet, in spite of all the volume and destruction, this particular night felt more like a sweaty, deafening group hug than a wrestling match. Part of this stemmed from the second band, Earthless, being hometown heroes, playing to a crowd of not just fans, but friends as well. And part of it came from each band’s own magnanimous nature, not only putting on a great show, but ultimately giving the impression that they were genuinely enthusiastic about playing to the crowd, who, likewise, exuded similar good vibes.

First band Iron Age was a surprisingly ass-kicking starter, with a singer who slightly resembled Axl Rose, with his scruffy, unshaven appearance and do rag. And for a solid half hour, the band cranked out an awesome set of old school thrash ‘n’ roll that was not just loud, but super fun. One enthusiastic fan rushed the stage mid-set, bumping into a few band members in the process, though not a one missed a single note. They did, however, chuckle a bit after the song was over.

Earthless, meanwhile, was an entirely different beast, opting for lengthy psychedelic rock jams than shorter, more tuneful blasts of metal. For the first 15 minutes or so, their sonic exploration was interesting, even kind of exciting. But the next 25 minutes got a little boring. The dudes got chops, I won’t deny them that much. But there comes a point where a guitar solo just wears out its welcome.

Baroness, however, reaffirmed my belief that a musically tight, rhythmically heavy set of metal can make for the best kind of live show. The Savannah, Ga., four-piece opened their set slowly, playing with effects before teasing Red Album standout “Wailing Wintry Wind.” Yet before launching into the song, they quickly transitioned into Blue Record introduction “Bullhead’s Psalm,” harmoniously setting the stage for a face-ripping set of ass kicking rockers, primarily culled from their 2009 album, with a few old favorites added for good measure.

The band tore through standout after standout, from “Jake Leg” to “The Birthing,” “A Horse Called Golgotha” to “The Gnashing,” and finally closing with their incredible 2007 single, “Wanderlust.” Every note was pitch-perfect and precise, but delivered with a maximum of intensity. In fact, I’d rank their performance as one of my top three favorites from the past year. And before leaving the stage, frontman John Dyer Baizley extended a genuine expression of gratitude to the crowd, not only leaving on a high note musically, but personally as well.

The real Axl Rose likely would have never done such a thing.