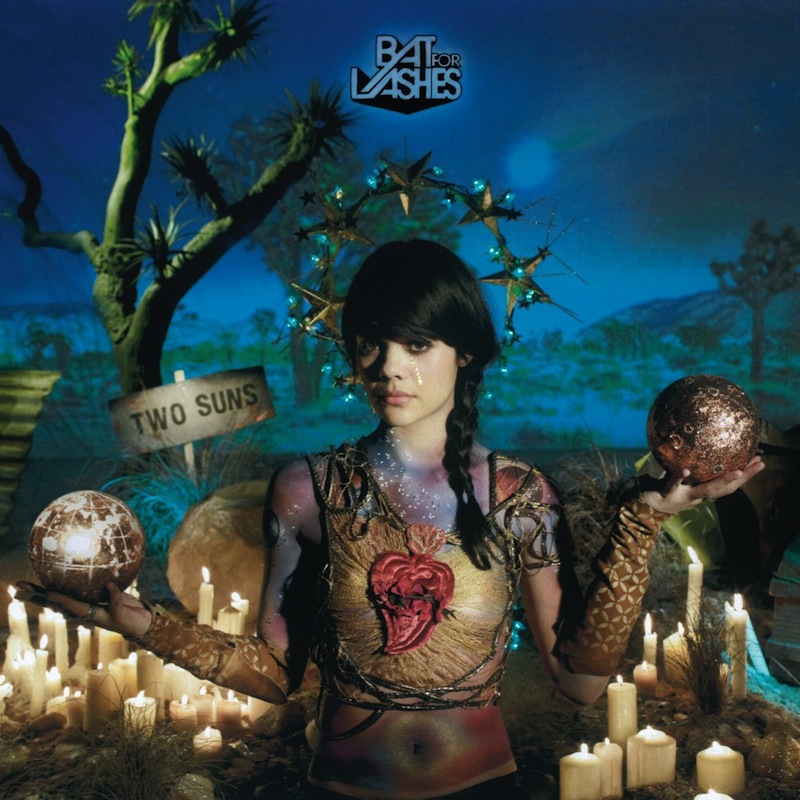 On her debut album Fur and Gold, Bat For Lashes‘ Natasha Khan presented herself as a bold and mystical troubadour. Her approach was mysterious and ethereal, but stylish, transmitting a cosmic mystique that recalled the likes of Kate Bush and PJ Harvey while maintaining a unique aesthetic all her own. On “What’s a Girl To Do?” the UK singer-songwriter even crafted a perfect pop single with her spooky and seductive approach. As impressive as that album and that song may have been, it was only a mere hint toward her amazing and beautiful second album, the outstanding Two Suns.

Two Suns is a monumental step forward from Khan’s debut, a gorgeous and mesmerizing collection of haunted ballads and spacey pop. Like her debut, it contains traces of other artists—Bush, Harvey, Björk, The Knife—but Khan puts a unique spin on her influences, spinning them into a delicate and intricately woven blend of all the best ambient pop of the past few decades. On leadoff track “Glass,” Khan’s spectral vocals float on a bed of reverb before booming drums and entrancing dulcimer lay a mighty foundation beneath her commanding delivery. Yet on “Sleep Alone,” she trades the dulcimer for shakers and laser-beam synthesizers over a rumbling bassline. Khan turns out a pair of spectacular singles in “Daniel” and “Pearl’s Dream,” the former employing a bassline akin to The Cure’s “A Forest” (which she covered earlier this year), new wave beats and a gloriously infectious chorus, while the latter is suitably weird dance pop, brought to a thrilling peak with Khan’s beautifully eerie vocals. She offers pagan gospel on “Peace of Mind,” a pounding epic on “Siren Song,” heavily percussive electro on “Two Planets,” and even gives guest vocalist Scott Walker (!) some competition on the stunning closer, “The Big Sleep.”

Natasha Khan has made significant progress in the past three years, propelling herself from an artist of interest to the top of her class. Two Suns is not just a beautifully crafted album, but one with many intricate layers. It has allure and mystique, and finds Khan shifting shapes without sacrificing her identity or overreaching her boundaries. In fact, after hearing this, I’m not sure she has any.