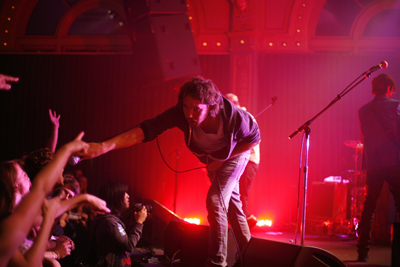 Indie rock frontmen basically come in two varieties. One is the everyman, plainclothes sort a a la Stephen Malkmus, letting their appearance and presence take a backseat to the music itself. The other is the showman, the over-the-top persona that dons garish outfits (see: Kevin Barnes), indulges in wacky antics (see: Tim Harrington) or simply plays up the classic sense of being a true, rock ‘n’ roll entertainer (see: Jon Spencer). Broken Social Scene’s Kevin Drew certainly seems to fall in the camp of the former, a scruffy and stylishly unkempt sort who performs in jeans and a hoodie. Yet while he may not don leather pants or exhibit sheer acts of silliness onstage, there’s no disputing that Drew is, undoubtedly, an entertainer.

With a band like Broken Social Scene, however, it’s important to have a figure who rises up as a kind of ringleader to guide the massive, ever-changing festivities. Helming the massive, Toronto-based collective at a headlining show at Portland’s Crystal Ballroom, Drew played part in a sprawling stage setup that included between 8 and 12 players per song, depending on how involved the arrangements were. And anyone who has listened to You Forgot It In People or this year’s Forgiveness Rock Record surely knows just how expansive those arrangements can be. And of those arrangements, Drew actually only sings about half, handing off the mic to fellow songwriter Brendan Canning, Andrew Whiteman or newest member Lisa Lobsinger. For being part of a huge, ego-neutral band, however, Drew exuded charisma, showing genuine gratitude and joy to be met by an enthusiastic crowd whose movements shook the floor of the aged theater.

By comparison, opening act The Sea and Cake was significantly more subdued. The group’s guitarist and singer Sam Prekop, likewise, is a casual sort, but far mellower. Playing a selection of songs plucked from various albums in their catalog, the Chicago-based band kept it low-key, but grooved regardless. Their jazzy, slick sound may not initially seem like a natural fit in a venue packed with around 1,000 people, but the veteran foursome sounded great regardless, winning over a few head-nodders in the process.

With Broken Social Scene, however, the experience is vastly different. Singers rotate, horn sections move in and out. Instruments are juggled. Very little is static. Certainly, this lends itself to unpredictability, but the band’s tightness and professionalism turns what could become chaos into a continually engaging experience. And of course, there’s Drew, greeting the audience with an introductory compliment, commenting that the band always returns to Portland because the crowd is always great. From there, the band took two-plus hours and delivered a greatest-hits-and-then-some set that was lengthy by indie rock standards, but passionate, well paced and, for that matter, a lot of fun. They showed off a tight instrumental dynamic on “7/4 (Shoreline),” emitted raw energy on “Cause=Time,” built a soaring arrangement on “World Sick,” and even altered “Lovers’ Spit” to be a solo Kevin Drew performance, albeit one joined by the biggest section of horns that evening.

At any Broken Social Scene show, there are bound to be a large number of variables, from the band members in attendance to the set list. But one thing’s for sure: they’re going to come at the audience with everything they’ve got.

More photos of the show here.