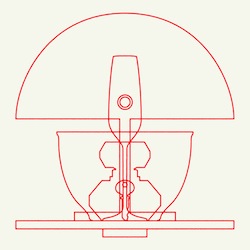 Michael Silver (otherwise known as CFCF) may have risen to success on the strength of his remixing for other artists, but his solo work has demonstrated that he’s a capable electronic musician in his own right. His latest of several EPs, Music For Objects, follows in that trend. But, if the quality has stayed the same, his approach has taken a slight turn here. In fact, if you saw the title Music For Objects and immediately thought of another electronic musician, I would not blame you. And, chances are, neither would he. It’s a little hard to believe that Silver did not have Eno in mind when he composed this EP, because this record consistently flirts with the conceptuality of the British pioneer’s early work.

First and foremost, the structure of this album holds true to the title, with each track designated by an object instead of a conceptual title (as per the norm in popular music), e.g. “Camera,” “Keys,” “Lamp.” This may seem like it leaves the listener with nothing to hold onto or access, but CFCF mitigates that problem by leaving the slate blank and allowing his audience to project. Sometimes a track will point the listener in the right direction, like the ornate flourishes and aesthetic focus of “Ring,” but just as often Silver will leave it open-ended. Take “Lamp” for example, which rests on a loop that sounds mysteriously like Vince Guaraldi’s “Linus and Lucy,” before amplifying just slightly with chimes and dissonant flourishes. Or “Bowl,” which is a satisfying track that deftly uses choral microsamples, but doesn’t necessarily evoke a sense of hollowness or curvature in its composition. This isn’t a bad thing by any means, because the music works regardless, but the concept seems to fold in on itself from time to time.

The general compositional method of the music on MFO is quite Enoesque, with heavy emphases on flow and lulling the listener into the meditative loop. However, CFCF doesn’t restrict himself to the spartan sonic palate of Music for Airports; instead incorporating bits and pieces of whatever instruments and sounds he finds necessary. This works best on “Keys,” which — like Author & Punisher’s Women and Children released last month — incorporates rainforest sounds to create atmosphere and then quickly builds to a dance climax. The preceding track, “Camera,” balances between horns, synth and a looped piano sample before moving into a soaring, jazzy second half. On these two standouts, Silver demonstrates the versatility of his arrangements and really picks the EP up without jarring the listener out of its soothing atmosphere. This delicate balance — not boring, but still meditative and patient — isn’t easy to strike, and CFCF deserves praise for executing it on Music for Objects.

All in all, though Silver doesn’t demonstrate Eno’s level of transcendent greatness, Music For Objects is thoroughly competent, and a more-than-worthwhile EP. Unfortunately, because it’s just an EP, it’s not quite long enough to have a lasting effect, but it’s plenty to raise anticipation for his next full-length a bit more intensely.

Matmos – The Marriage of True Minds