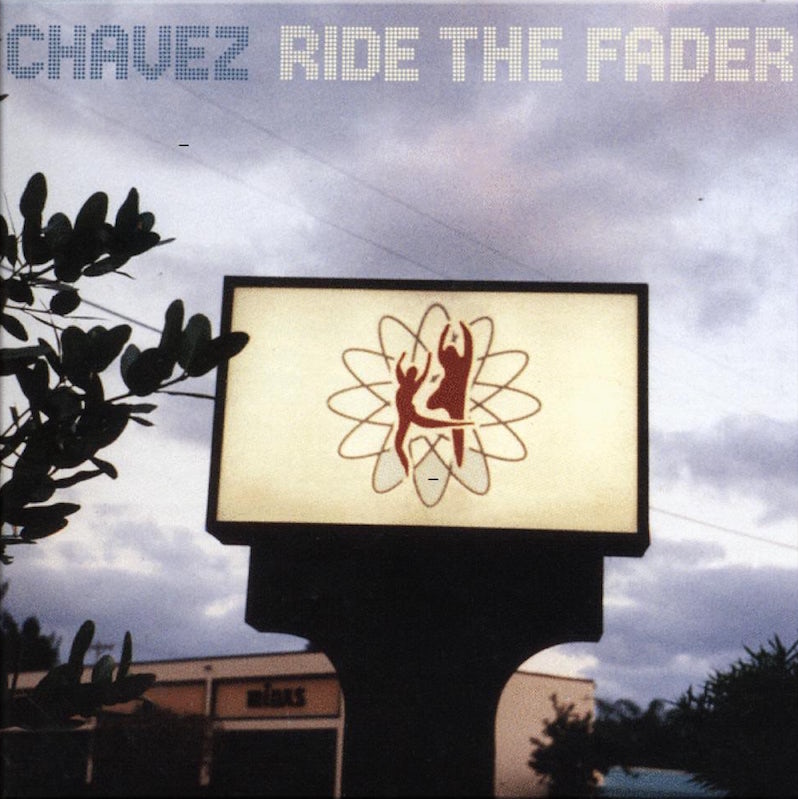 The first sound of Chavez‘s Ride the Fader is a little hard to place. There’s some clacking, some clanging—the sound of metal rattling against wood. It takes just seconds to orient the listener, and as the pace quickens, up rises the sound of voices screaming in adrenaline ecstasy. Chavez have quite literally put you on a roller coaster plunging down its steepest hill. A little on the nose? Perhaps, but there’s maybe no better metaphor for the rush of punchy guitar rock that unfolds. Chavez are taking the listener on a ride, a loud, fast, weird and joyous one that doesn’t always follow the logical trajectory of a rock album but definitely takes you somewhere exciting.

In 1996, there were a lot of bands that kind of sounded like Chavez, but there were no bands that really sounded like Chavez. On a wide scale, they seemed to fit in alongside any number of big-guitar indie rock and post-hardcore bands that ranged from the abrasive and abstract (Shellac, Jawbox) to the more commercially viable (Hum, Smashing Pumpkins). Chavez didn’t have the name recognition of a band like Smashing Pumpkins—though coincidentally frontman Matt Sweeney would later perform with Billy Corgan briefly as a member of Zwan—but they had the riffs and the overdrive. And in Ride the Fader, they also had a classic rock album—to date, their last.

But while Chavez on paper had the same elements as a lot of other bands that graced the studios of MTV’s 120 Minutes in the ’90s, the way those elements came together were often vastly different than what their peers might have done. Sweeney and Clay Tarver played guitars as much in harmony as they did in opposition to each other, melodies forming only as their riffs would crash against each other in just the right way. They never kept their hooks buried beneath the surface—single “Unreal Is Here” is the band at their most direct and melodic—but they also built houses of righteous noise around those melodies, whether on the polyrhythmic riffs of “Tight Around the Jaws” or the krautrock pulse and squealing guitar heroism of “Flight ’96.” It’s easy to imagine hearing parts of these songs on the radio—but there are also parts of those very same songs that program directors would probably have no idea what to do with.

Ride the Fader is Chavez fully formed, confident, solid and unstoppable. But it took some time to get there. When Tarver and Sweeney first formed the band and eventually began to write the songs that would come to make up debut album Gone Glimmering, they spent a long time deliberately figuring out what the band is.

“I always thought of the first record as a manifesto of what the band would be,” Tarver says in a phone call from Los Angeles. “So it’s really controlled, and we were looking over our shoulder a bit in that really microcosmic way. It took us a while, and people wondered what the hell we were doing. It really stressed us out. It took Matt and I a year to write our first song, which is one of my favorites, ‘Repeat the Ending,’ and once we finally did that it was like, oh shit this is what the band is.”

“Everything was kind of a brutal democracy,” Sweeney says of their writing process. “Everybody had to be OK with what everybody else was doing. Everyone had to sign off on everyone else’s parts. The idea of everyone expressing themselves was not the goal. Like, I’m not a good musician compared to [drummer] James Lo. But I was allowed to write a drum beat for him. And James would have a pretty heavy hand on quality control and on how riffs went. Everyone was allowed to say ‘What if you did this?’ With the understanding that I couldn’t play his part and he couldn’t play mine. We all played together because we liked everyone’s ideas. Directing each other. By brutal, though, I mean, it was like ‘no, that ain’t gonna work.'”

Once Chavez released Gone Glimmering, they decided to have a much looser approach to its follow-up. The band recorded in several different sessions with producers Bryce Goggin and John Agnello, and in each case would come into the studio without all of the ideas fully fleshed out. The idea was to not overthink the album, but it led to some degree of stress in figuring out how to make everything come together.

“It freaked us out because it felt like we were half-assing it a little, but I think that was one of the best things about the record, because not everything was figured out,” Tarver says. “It’s a completely valid way to do music, we just weren’t sure it was a valid way to do Chavez music. We’re super into quality control, super into purposeful, everything we do. We really do keep an eye on the emotional story you’re telling with the song. But we care about the craft a lot. It was good for us to not have everything figured out.”

On Ride the Fader, Chavez deliver some of their best songs, as well as some of their least conventional. While a track like “New Room” carries an immediacy through its slow-burning melody and rise to climax, it’s structurally aberrant from typical verse-chorus-verse standards. And though “The Guard Attacks” and “You Must Be Stopped” are explosive, amps-cranked, maximum-overdrive rock songs, they carry an almost subliminal pop sensibility. They’re catchy songs. They’re arguably even pop songs. Just really fucking loud ones, played without regard for three-chord hooks. It’s a unique collision of sounds, which extends from the band’s own M.O.

“It was this ongoing conversation about what was appropriate to Chavez and what fit and what we could do together that only our band can do,” Tarver says. “I think AC/DC has that rule. Whatever song they do, only AC/DC could do that. We sort of had that vibe. We built this thing, we need to grow and change, of course, but it should only be what only Chavez can do.”

There came a moment in Chavez’s career where—like many of their peers—they were approached with opportunities to move to bigger labels and work with an even bigger budget than what Matador could offer them. But they weren’t interested in taking the bait. For one, they liked Matador, and for another, they never really expected that they were the kind of band that could actually end up getting a million-dollar contract, even if such a thing wasn’t unheard of at the time.

“We were happy working with Matador,” Sweeney says. “And I think we were just really realistic about the whole thing. But there were also other labels that were looking at us. Like ‘you guys could be huge’ kinda stuff. But that was not our intention.

“I was painfully aware of the fact that bands were signing million dollar contracts and tanking,” he adds. “I thought all that was really fucked up and bad for everything. But then by around 2000, I was like ‘That band was so fucking smart. Like nobody was into their band, but who cares, they made a million dollars and got to set up studios and start businesses!'”

Chavez never signed to a major label. And despite having released a handful of videos and going on a number of tours, the band suffered the fate so many underground talents have: They were underappreciated in their time. Being a unique band with a sound that only they could produce had a downside—a lot of people simply didn’t get it.

“No one thought it was particularly of note at the time,” Tarver says. “People would say they think our music was so difficult. If they didn’t like it, they’d say it was like Rush. And like, no it’s not crazy, it’s emotional! Nobody cared about it at the time. At all. We got to play with cool bands, and some people liked it. But for the most part nobody cared, and everyone was just sort of like, ‘yeah, it’s good…'”

No one can be blamed for thinking that Chavez broke up in the ’90s, though that’s not exactly what happened. It took 21 years for the group to release just three more songs after their Ride the Fader, and even the existence of 2017’s Cockfighters EP feels like some kind of small miracle. The New York band never officially declared an ending, though. They just sort of stopped.

Ride the Fader‘s legacy is one of an audience slowly catching up with a band that was ahead of its time, and progressive in ways that a lot of other indie rock bands of the moment weren’t. Tarver even recalls the moment that Sweeney told him about the positive discovery of learning how much people have come to appreciate and respect the album in hindsight, which he says caught him off guard. As a result, Chavez ended up playing more shows together at the end of the ’00s, an event that may or may not happen again, but either way can’t really be planned for.

Chavez have slowly and gradually built up something of a legend, and a lot more people know the name now than they did in the ’90s. They released two great records then temporarily stepped aside, and in their absence, those records found their way to fresh ears and to a newly appreciative audience. Whatever frustrations they had at the time in finding an audience that understood them, they stand proudly by the strange, intense and loud rock record that they made. As damn well they should.

“I like the whole record,” Sweeney says. “There’s some fucking sick jams on there.”