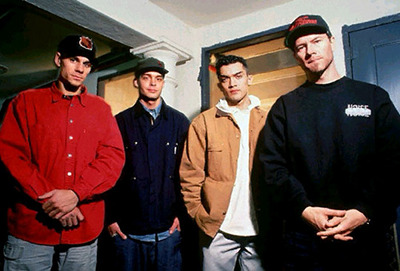 The most important records in any listener’s collection are not always the first purchases or big names, but rather the ones that opened a door. These gateway experiences can be at once exciting and confusing, disorienting and invigorating, perhaps even a little uncomfortable. Yet when you’re an adult, particularly one whose job is to listen to new music on a daily basis, it doesn’t happen as often as you’d like it to. Those moments of head-buzzing clarity when something takes you out of your comfort zone and plops you square into a world that seems a lot bigger, a lot more bewildering and somehow more awesome still arrive at unexpected times, and they do still happen — though they tend to exist farther out at the fringes than they used to. But any “eureka!” moment of the past five to 10 years scarcely registers in comparison to having my ears blown off for the first time by Helmet‘s Meantime.

My introduction to Helmet came thanks to my brother during Christmas break, around the time of my 11th birthday. I had been slowly but surely amassing a collection of grunge cassettes via BMG and Columbia House — Pearl Jam, Nirvana, Alice In Chains — not quite mature enough to fully grasp the gravity of songs about alienation and heroin, but close enough to adolescence to know that I liked loud, distorted, crunchy rock music. I was still a ways off from getting into punk, and definitely not ready for metal just yet, but somewhere in the recesses of my mind was a voracious appetite for ugly, destructive sounds and all I needed was the catalyst. On a chance afternoon, my brother plopped a pair of headphones on my head, cued up “In the Meantime,” the album’s screeching, chugging leadoff track, and set me off on a life-long course through sonic abrasion.

Meantime blew my mind, certainly, serving as an introduction to a whole variety of unfamiliar concepts — noise rock, post-hardcore, metal. And the ambiguity of the blurry, shovel-wielding man in a protective suit on the cover left me stumped for years as to its true image. Yet regardless of my own personal reaction, when Meantime arrived 20 years ago, it was a pretty big deal. In the early ’90s, primarily as a reaction to the mega-success of Nirvana’s Nevermind (and by proxy the signing of Sonic Youth), major labels began seeking out and subsequently drawing up contracts for any band with any tenuous connection to grunge. Helmet, in a sense, didn’t seem like logical candidates. The band’s classically trained frontman and guitarist Page Hamilton, formerly of Band of Susans, had spent some time playing with avant garde icons like Rhys Chatham and Glenn Branca. And the band’s first album, Strap It On, displayed an abrasive, shrieking noise rock sound much closer to their Amphetamine Reptile labelmates than, well, Nirvana.

Despite only selling around 10,000 copies (admittedly not a bad figure) and featuring few songs with any commercial viability, Strap It On nonetheless piqued Interscope’s interest enough to offer the band a $1 million advance, which seems like a lot of money. In retrospect, however, it probably wasn’t a total loss — the album was certified Gold in the United States, and reportedly sold 2 million copies worldwide. Still, a band like Helmet seemed risky for the time. Raw, heavy, prone to discordant solos and rigid, metallic rhythms, Helmet made for an odd mainstream candidate, and barring the near-legendary single “Unsung,” didn’t deliver too many pop concessions on Meantime. Yet they also didn’t wallow in the rusty scratch of Strap It On. With more resources at their disposal, and a sharpened crunch, Helmet entered an entirely new stage, and came out of the studio with a once-in-a-lifetime masterpiece of minimal power-chord punch.

The opening, Steve Albini-produced cacophony of “In the Meantime” comes down like the proverbial gauntlet, introducing the listener to a thick, massively grooving churn of a record. It’s not long before the song’s opening squall transforms into a thunderous drop-D tug-of-war. Page Hamilton’s scream, which was far more unhinged on their debut, is a more commanding bark, disciplined but harsh, until the coda, in which he unleashes an agonized roar. Just one of nearly an album’s worth of taut, perfect and remarkably streamlined alternative metal tracks, it presents a band with tighter focus and direction, and a deceptively simple songwriting style that surpassed any of their prior noise rock exercises.

In contrast to “In the Meantime,” however, Meantime contains a number of rhythmically complex numbers that, contrastingly, are strangely radio friendly. “Give It” utilizes jazzy rhythms and a healthy dose of empty space, as Hamilton, sounding more like a sedated Ozzy Osbourne, nonchalantly sings lines like “Killing hurts/ has to be done.” “Unsung,” which became an alternative radio staple that still ends up in rotation now and then, is by far the most streamlined and accessible track on the album, and for that matter, their entire discography. Its riffs are immortal, of course, but the secret weapon is drummer John Stanier, whose well-timed piccolo snare snaps give the track an essential punctuation. An even stronger showcase of Stanier’s superhuman abilities can be found in “You Borrowed,” which closes with a percussive attack that’s more tenderization than time keeping.

Meantime occupies an interesting space in rock music. It’s a perfect metal album without actually adhering to many metal characteristics, and it’s a stunning noise rock record performed with far more discipline than “noise” is meant to entail. It also occupies a unique space in the band’s own discography. Their 1994 follow-up, Betty, threw far more experimental elements into the mix, and 1997’s Aftertaste, while more consistent in sound, didn’t have the same cohesion in quality. They unceremoniously broke up in 1998, which by all accounts was amicable, though in a webchat in 2000, Hamilton commented, “we found it hard to look at each other anymore.” Hamilton has since re-launched Helmet and released three more albums. In 1992, however, Helmet achieved perfection, which is a triumph few bands are fortunate enough to pull off.

Shadow of the Horns: 50 Years of The Riff

In 1992, the grunge explosion earned Helmet a million-dollar contract