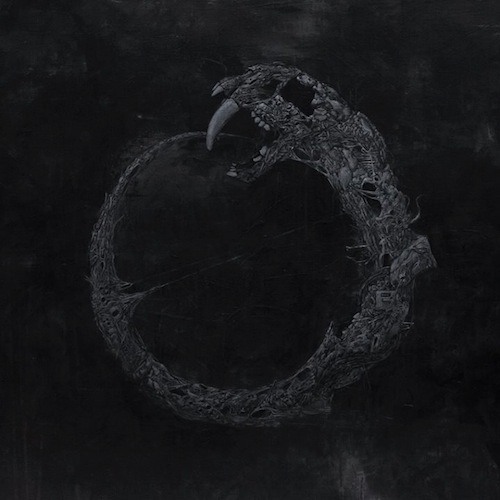 At the end of January, music journalist Aaron Lariviere proclaimed 2014 as the “year of hideous sludge,” and he very well could be on to something. Metal isn’t typically a field in which following trends will get you very far, but looking back over the past few years, it’s hard not to see certain characteristics rise to the top among the best metal of each given year. For instance, 2011 was a prime year for iconoclastic black metal, while the Class of 2012 showed a lot of reverence for old-school sounds. And 2013? Well, that was the year that tradition was essentially fed through the wood-chipper. But after hearing Culted’s Oblique to All Paths, Indian’s From All Purity and especially Coffinworm’s IV.I.VIII, “hideous sludge” seems to be paying off dividends in 2014 — and doubling as a candidate for Pantone color of the year.

Indianapolis muck-slingers Coffinworm know hideous. Their Profound Lore debut When All Become None was a slo-mo crawl through unctuous sonic bilge, intoxicated and noxious, but above all captivating in how the band shaped their musical filth into such devastating forms. IV.I.VIII is an extension of that fantastically rank debut, deepening Coffinworm’s commitment to dense and crushing sounds while carving out unexpectedly accessible melodies in the process. And the album titles — which include “A Death Sentence Called Life” and “Of Eating Disorders and Restraining Orders” — don’t disappoint, either.

Produced by Sanford Parker (Nachtmystium, Yakuza), IV.I.VIII is sufficiently dark and evil sounding for a band of Coffinworm’s caliber. This is dense and powerful metal they deal in, and it comes in a variety of shades and hues. Slow-moving, venomous sludge is their bread and butter, and on tracks like “Of Eating Disorders” and “Black Tears,” they bolster their sinister crawl with riffs that deliver melodic sustenance side by side with poisonous pummel. But with the blast-beat onslaught of leadoff track “Sympathectomy,” the group convincingly blackens their sound, and on the chilling “Instant Death Syndrome,” descends into ominous doom.

With each of IV.I.VIII’s six tracks (note the evil numerology there), Coffinworm find a happy medium between outright destruction and interesting songwriting. And that, all too often, is a challenge unmet not just by purveyors of hideous sludge, but by metal bands of a whole range of disciplines. On IV.I.VIII, Coffinworm doesn’t just display a commitment to all things murky and bilious, but also in shining new light on sludge’s toxic luminescence.